Share All sharing options for: Who is Oklahoma State's Sister Athletic Program? 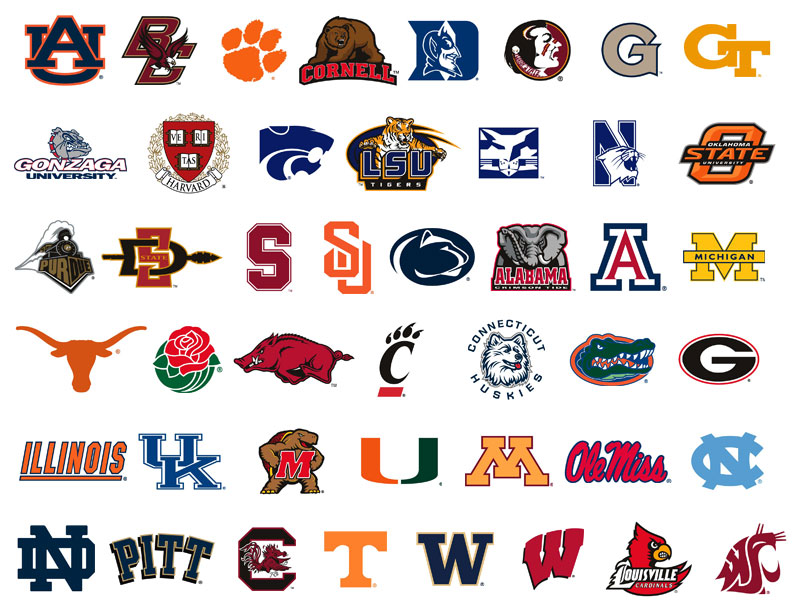 Who is our soulmate?

Don't we all kinda wonder how Oklahoma State is perceived nationally? As an Oklahoma State fan living in Oklahoma, it is very difficult to exist outside of your own viewpoint in order understand how the rest of the country sees us. Does a guy in Michigan or Florida think Ok-State is a nobody, a big program, a little brother to OU, the alma-mater of a well-endowed writer named Sam? How are we viewed?

As I am someone that loves lists, power rankings, and comparisons I don't think that simply being told; "Eh, you are a middle tier program" is explanation enough. I feel that I need a gauge of some kind in order to truly understand where we exist in the mindset of fans outside of the Big 12. A ranking or list would probably be too obscure for something like this, so I'm thinking the best gauge is going to be to find a program, outside of the Big 12, that nationally we are viewed as being very similar to. And since we know how we view some other program that we have no allegiance to, this will give us some perspective of how others view us. (I hope they think we are neato!) And as a side bonus, we will know what school has the most similar fan experience to ours and send them condolence cards.

So first things first.... what are the main attributes that define Ok-State's athletic program, overall image, and what we are really cheering for?

Ok... so we have a rough list of what makes up Ok-State's image. Now we need to narrow the list of candidate sister schools. (this process feels so official doesn't it?) I'll just go through all the power conferences team by team, consider each school based a on surface level impression of them, and list the potential candidates. (Obviously there is no hard data put to this so it is very much opinion. And in this case my opinion will represent your opinion. Dream come true for you!)

ACC: Virginia Tech, NC State. There are more potential matches in here but since the ACC is not a great overall football conference, I have a hard time including more than the closest examples. (suck on that Maryland!)

Big East: None. How exactly is this conference deserving of a BCS bid?

Big Ten: Illinois, Michigan State, Purdue, Minnesota. I considered Wisconsin and Iowa here as well, but they are both the big dogs in their respective states and wouldn't be able to sympathize with our inadequacy issues.

Pac-10: Arizona, Cal. I don't think I can include any of the Washington or Oregon schools (and will ignore the Knight/Pickens corollaries) as they all seem like the same school to me. Too much parity up there.

SEC: Arkansas, Mississippi State, South Carolina. Is it possible to like an SEC school if you don't live in that area of the country? So many hateable schools.

There they are... the 11 teams with which, at least on the surface, we seem to share some commonality in image, appeal, respect, etc. Now to whittle this list down to the one lucky school that will be awarded the title of Oklahoma State Sister Athletic Program (in image and fan experience). I'm thinking I can start this process with quick write-ups of each of the Awesome 11TM and hopefully be able to cut the list down pretty quick. By the time the Awesome 11TM are reduced to a few schools, I can probably match them up head-to-head to determine our true soulmate. Kinda like how match.com has those factors of compatibility, except somehow this feels even more creepy.

So here is a table I made to do this compatibility matching. I will pull out the top few scores and let them face off head to head to determine who is the true Sister Athletic Program. (I kinda feel like all of them are rooting for a very low score) 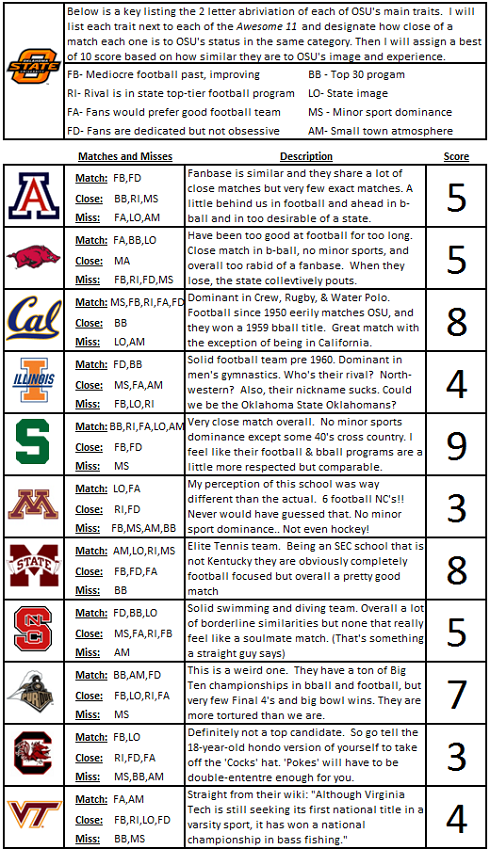 So there that was. Wheeww.. Who needs a break?

Based on the scores there seems to be a natural break between the top 4 (Cal, Michigan State, Mississippi, State, and Purdue) and the rest so I will take those top 4 and put them in a bracket to determine the winner/loser. Also, I think a post titled "Putting Virginia Tech's National Championships Into Proper Historical Perspective" will be on next weeks agenda. 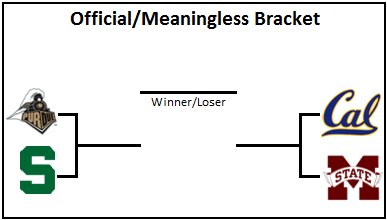 Using the oh so meaningful scores from above Michigan State is the favorite, but let's look a little more in-depth. (But not too in-depth. Some of us have other things to do.) I'll just list a few more attributes about each of the respective schools. Let's begin with the Big 10 side of the bracket. (Is anyone else kinda bothered that 2 of our 4 most similar teams are from the Big 10? What is it I hate so much about the Big 10? The cold? The paleness? This may require its own post sometime.)

Purdue
One thing I love is that they have a cool story about their mascot and nickname in the way we have a cool story about Frank Eaton and Piston Pete. So points for that. Also, despite their lack of notable football accomplishments, Purdue has produced a freakishly high number of successful NFL quarterbacks. Similarities there to tailback U.
Their one main drawback is the lack of a good rival. While their main rival (Indiana) boasts a top tier basketball program (from a historical perspective) I don't feel like they cast the shadow that the OU football program does. And that really is such a defining characteristic (though not THE defining characteristic) of being an OSU fan, and our image in general (as we have all had the "Oh you are from Oklahoma, how about those Sooners" thrown at us every time we travel) that I don't think I can move a team on to the championship that doesn't have that.

Michigan State
As far as I can tell East Lansing and Stillwater are pretty similar. Neither Michigan or Oklahoma are exactly popular vacation destinations, however they each have their charm. And the fact that Michigan State's rival is an in-state top-tier football program that considers an out-of-state top-tier football program their chief rival is so similar it's eerie.
The differences would be that they have 2 fairly recent basketball NC's (1979, 2000), and claim to have won or shared 6 football NC's (1951, 1952, 1955, 1957, 1965, and 1966) although we know how shady some of those old ones can be. What this means is that Michigan State would probably be ranked about 10 spots higher than us in program recognition in both basketball and football. So while they may receive a tad more recognition, I think the little brother issues, town atmosphere,and fan dedication make them a pretty close match

California
If we can get past the differences between the states of California and Oklahoma, this looks like a match. Some great minor sports dominance that other schools probably make fun of more than they respect it, a strikingly similar football history, and even though their main rival is Stanford they are definitely overshadowed by an in-state top-tier football program. On top of that... look at these basketball results side by side: 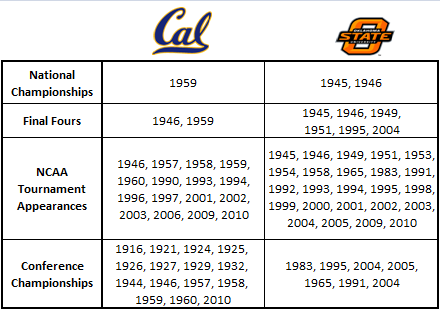 Mississippi State
Small town, somewhat overshadowed by in-state rival (although that rivalry is a little too evenly matched), great fan dedication and overall atmosphere comparisons, and they even have a very generic nickname like us. But in the end I think they mostly share surface commonalities and the lack of basketball passion, and overwhelming football focus, probably take them out of the running here. Hold your heads high though Mississippi State, you reached the semi-finals of the most arbitrary bracket ever constructed. 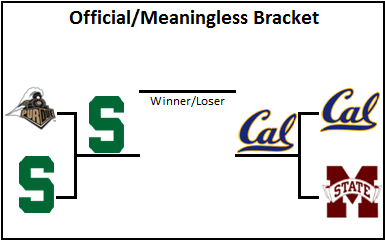 I kinda feel like we could flip a coin here. Michigan State has the edge in image, location, and atmosphere, while Cal has an advantage in shared accomplishments. So based on the similarity these 2 final teams share I decided to take the decision to the people person and called up a buddy that lives in North Carolina who asked to remain anonymous (which with the traffic we get means I could still post his name, ss#, and photos of his family). His response was:

"Well, if someone told me I could attend either OSU or Cal, I would lean towards Cal, if someone asked me if I wanted to go to a game at OSU or Cal it would be a coin toss, if someone were to arbitrarily ask me who has the better athletic program, I would probably say OSU but after some deliberation. But the decision between Michigan State and OSU would be almost impossible no matter the question asked. Would you rather see a game at one or the other? Who is the better program? And most other question would all be difficult to answer, which makes me think OSU and Michigan State are very similar in how I think of them."

So given that my imaginary friend could see obvious differences in Cal and OSU, yet could not give either program the edge in distinguishing the Spartans from the Cowboys, I think the winner is determined (although it was a very tight race). 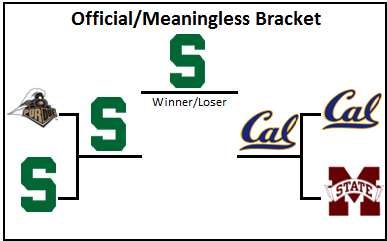 Congrats Michigan State.. you have just won the competition that was voted "Award Least Likely to Inspire any form of Bragging". You can pick up your trophy and voucher for 3 free therapy sessions when we see you at the Alamo Bowl in January.