Share All sharing options for: Cowboy, Sooner Basketball Programs Apparently Competing for Honor of "Most Embarrassing Headline on DOK.com"

The newest version of the always exciting Bedlam rivalry is forming in the sports sections of local newspapers and websites.
http://newsok.com/sports from 5/20/2010 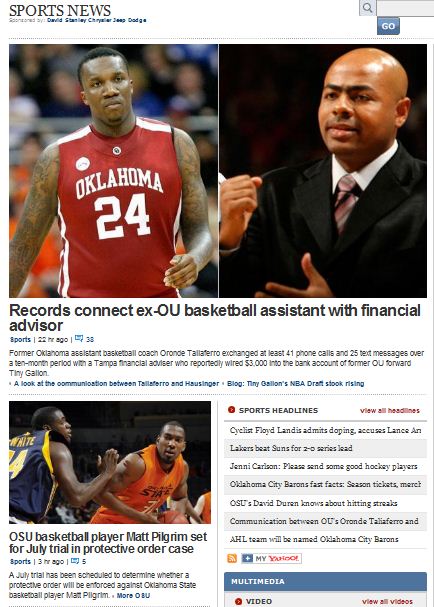 Fear not Cowboys...While OU seems to have the initial upper hand, we are told that Ok-State has some plans in the works that are aimed at overtaking the top spot of the DOK sports section. An inside fake-source who wished to remain fake-nonymous released a fake-ment exclusively to wastedoptimism.com.

"All our plans are written in pencil right now, but we hope to have a firm course of action plotted in the next few days that should put Oklahoma State right back on top." the source fake-stated, "Ideas leading the list right now are OSU athletes being in some way involved in one or more of the following: Prostitution rings, polygamy, moonshine runnin (this one may require time travel), robot porn, furries, serial littering, cannibalism, Twilight book club, graffiti, selling fake Coach bags, stealing organs (human or musical), and my personal favorite, leaking a story that Keiton Page invented a tornado machine that is the sole cause of the recent weather in Oklahoma."

Well that's a relief. Hopefully our fake-formant is correct and Oklahoma State comes through in producing enough scandal-magic to overtake the Sooners in this newest, and state-humiliating-est, installment of the exciting Bedlam rivalry. Stay tuned fellas.