This Michigan Issue Has Been Taken Care Of, Says Michigan.

Share All sharing options for: This Michigan Issue Has Been Taken Care Of, Says Michigan. 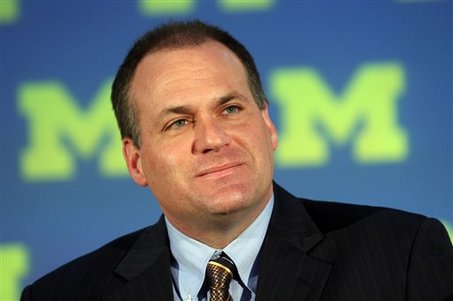 "Everything's cool.. get off our backs."

The University of Michigan football program, which has been on the verge of a full blown NCAA investigation into practice time, and allowable number of coaches infractions, released a statement yesterday that better not have cleared their name, and ended the issue. To summarize the entire press release in a few words, "Sorry dude... we cool now?".

Now maybe I am a skeptic, or maybe I am still sore about our star WR being suspended for a year for eating dinner and doing pilates with Deion Sanders and am expecting all future investigations to be treated in the same manner, but this story seems to have the potential to have DaVinci Code sized holes in it*. When any person, or institution, uses language like "the institution does not believe it is warranted in this instance", that feels fishy to me. Would Bones stop investigating because someone said it isn't warranted in this instance? Hell No! Bones would find the shit out of that killer or whatever it is she does. (Does anyone watch Bones? Is this what she does?)

All I am saying is, "NCAA, please make sure the death of Dez's career meant something." I realize these are separate issues but, if you are going to be badasses, then be badasses across the board. Don't drop the hammer on one guy, then take another schools word for it when they say everything's fine.

* Let me preface this footnotenovel by saying that I don't exactly fancy myself as as writer that never leaves a gap in a story, but I also don't have thousands of people making millions of dollars scrutinizing every word I write before it is ever released to the public. Anyway... I have seen the DaVinci Code movie a few times and even read the book a few years ago and was wondering if anyone else noticed these two huge plot holes.
Please tell me if I am way off base and there really is an explanation for these:

This ends the most off-topic post to date. Thank you all for understanding.