Idea: What About a Train to Stillwater?

Share All sharing options for: Idea: What About a Train to Stillwater? 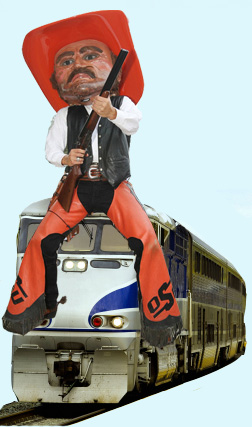 Imagine you are in downtown Tulsa or Oklahoma City at an afternoon meeting, and suddenly you get a call from a buddy who wants to meet for a few beers. Naturally, you say "Hell yes", and after 3-4 tall ones you realize that OSU is playing Missouri at GIA and you want to go. Currently, that would be a risky and impractical proposition. It’s over an hour drive to Stillwater from Tulsa and even we don’t recommend driving after 3-4 beers. But what if it wasn’t impractical? What if it was easy? What if you could take the OSU BULLET and be there in 40 minutes?

Imagine for a second walking to the downtown train station, boarding a 110-mph train, and getting off forty minutes later right in front of Boone Pickens Stadium. You head to Eskimo Joe’s for 2 Joes cups (4 Beers) and then you head into GIA for some Big 12 basketball. 2 hours later, the game is over and you just have to hop back on the train to sober up for 40 minutes as you ride back to home.

Sound Crazy? Absolutely! But when you have T. Boone Pickens in your corner, anything is possible.

Environmental Benefits
Pickens Plan any one? How about we get this thing to be powered by wind? Then everyone wins, and we send a big FU to the oil companies. Oh yeah, and you have Pickens involved.

Economic Benefits
Every dollar OSU fans spend on OSU Athletics generates $6 or more in economic returns. OK, so that was 100% made up but it sounds good right?

Seriously though, how many people that don’t usually go to basketball games would hop on a train if they could save 30 minutes of their time, and not have to drive? It’s a no brainer for Football Season too. US412 is fairly insane after night games. I honestly pissed right on the highway last season while traffic was stopped and thought nothing of it. I was not alone.

And aside from athletics, what if you could actually increase enrollment? Wouldn’t the number of commuter students increase instantly? Attending OSU while living in Tulsa or OKC would go from difficult/impossible without a car, to simple. All this equals more tuition for OSU.

The Pistol Pete Bullet train system would also add a new hub to the Tulsa and OKC urban areas and it create jobs in Oklahoma’s manufacturing, construction, railroad and service industries (we assume… we didn’t major in job creation). More beers at Joes!

The Pistol Pete Bullet Hub Train would also make it cheaper for those attending games. It costs about $20 in gas for the round trip from either Tulsa or OKC to Stilly (and if you come from Tulsa you pay another $3 in tolls). Go to every football home game and you’ve spent about $120 in gas alone. And you have to stay sober...or drive buzzed.

In conclusion... a train system connecting Tulsa and OKC to Stillwater seems like it would work and would make money. Thank you for your time and please send investment capital directly to Cincinnati Joe's paypal account.