Who Gets the Family Bible?

Share All sharing options for: Who Gets the Family Bible?

We're calling it official. Tom Osborne and his NU Cornhuskers will click "attend" on the Big Ten's Evite this Friday.

I've got a bag full of mixed emotions right now. I guess I'd say it's like being 24 years old and your parents decide to get a divorce. Fond memories and nostaligia of the passive-aggressive "happy home" you thought you had as a child cloud your head. Then again, what do you care? You're living on credit cards and leased Rovers about to visit ASU on gameday and slay some quality Sun Devil quiff. Please indulge my therapy here...

Back in 1996, I was a professor/student/resident lothario at Oklahoma State University (the Yale of Aggie Schools, so I've been told). Being part of such an elite assembly of academia, I attended many intellectual functions where issues of the day were passionately dissected while we gnoshed on fine wines and cheeses.

Professor Goodwin of the OSU English Dept. enjoying his '92 Chardonnay

One of these particular functions was the cleverly themed "BIG 12 Function" - a classic study in how many people could pack into a parking lot behind Eskimo Joe's while some shittyly sounding crossover of Toad the Wet Sprocket meets Lisa Loeb played to the local masses and lots of copper tasting, well- aged (actually waaay over-aged) beer was tossed into mouths and subsequently regurgitated back onto the pavement.

It was here that guys met their future wives (even for just a night), and girls paraded their fashionable t-shirt/jorts/keds ensembles. It was magical. It was the Inauguration of the Big 12. A super conference that would reap national championships, host the first Overtime in NCAA football history, see two teams in the Final Four at the same time and other crazy shit I don't have time nor energy to remember . It was what we knew. It's all we ever knew.

I'm sure that those old hags who still wax fondly on the Big 8 and SWC would tell me to wipe my tears with the dirty diaper I'm wearing, but they don't know shit, because they're irrelevant. I only speak for the publishers of this esteemed website and those who share our age and tax brackets (the latter you guys will never be able to touch). We were there for the kickoff and all the excitement, heartbreak and pure entertainment this conference would provide for the last 14 years. And now, it's over. Tom Osborne has divorced our mom.

Oh well... I guess we'll just settle for road trips to ASU and making new memories with this: 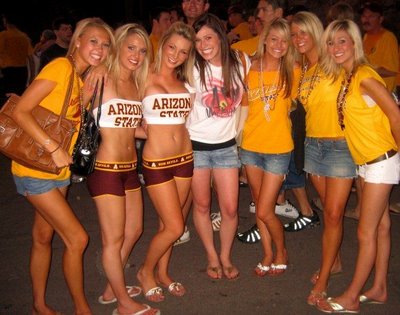 "My Next Girl Will Be Nothing Like My Ex-Girl"