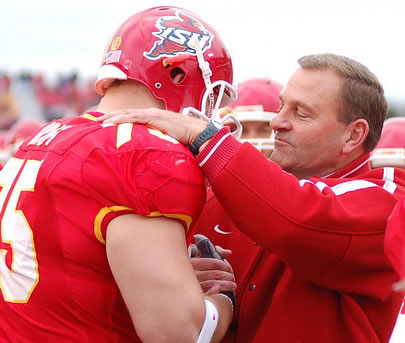 "We have found a home son"

Apparently everything we thought, and the months of speculation were all for not as we continue to be shocked by the actual moves that have transpired in all this conference realignment business. First, Colorado surprised everyone by becoming the first school to bolt the Big XII for the Pac-10. Then Nebraska made its semi-expected move to the Big-Terrible. Now, in the midst of all these rumors of A&M moving to the SEC, the Oklahoma schools moving to the Pac-10, and Texas joining the Pac-10 then the SEC then staying in the Big XII, Iowa State has come out of nowhere, taken its destiny into its own hands, and made a huge splash by announcing that they are joining the Big XII. This bold move has all of Cyclone nation (Jim, Dan, Heather, and Paul) breathing a sigh of relief as they have secured their place in all of this madness by finding a home in the Big XII.

I wanted to reach Iowa State officials to get an official comment but was unable to get through (probably because both of the university's phone lines are tied up with all this news), so I reached out to my high-school buddy Jack, who is currently attending Iowa State, to at least get some sense of the reaction in Ames.

Here was Jack's response to my asking how he feels about Iowa State finally becoming one of the big boys and joining the Big XII conference:
"Seriously dude? Do you honestly not know that we have been in the Big XII for 14 years, and we joined the original Big 8 in 1908? 1908! We have been in this conference in all its forms since 190-fucking-8! I'm not sure if you are intentionally being a dick or what, but this is honestly the dumbest piece of news that has ever been reported. If you put this up on your site I am going to whip your ass."

There you have it....Iowa State is officially a member of the Big XII conference. Wow, those are words I never expected to have to type. For more up to the minute conference realignment news, stay tuned to wastedoptimism.com.