WO NBA Draft Preview: Who Will Take BGJ?

Share All sharing options for: WO NBA Draft Preview: Who Will Take BGJ?

Tonight we, once again, send off a Cowboy great, and fan favorite, to the NBA. And make no mistake about it... Big Game James was a fan favorite. Though he wasn't the biggest personality to ever wear the orange and black, there was definitely something very like-able about him. Low key, respectful, and methodical, James always seemed like a guy you would love to play with or coach. Watching an interview with him could put you straight to sleep (still can!), but you can tell that the dude cares about his teammates, the fans, Oklahoma State University, and the sport of basketball as a whole. At Obi's senior night (aka: BGJ's farewell night), James received a thunderous applause during intros, we gave him the "one more year" chant every time he went to the line, and he shared long and meaningful hugs with every player and coach on the bench when he came off late in the 2nd half. It was a beautiful send-off for one of the five best players to ever call GIA their home court. Tonight, he will become a millionaire and probably buy some exotic car that is made to, at first sight, automatically trigger every woman's primal blowie-giving instinct. Well we all couldn't be happier for you James. (I think I have earned the right to speak for all OSU fans.)

With that touching intro out of the way... let's take a look at BGJ's draft profile, and which NBA team's fanbase will be falling in love with him the same way we did (enjoy our sloppy seconds NBA fan).

To start with, after the jump, let's all be amazed by some Anderson info, stats, and a highlight vid. 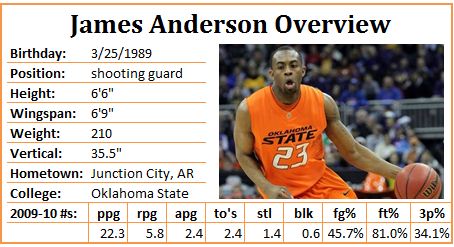 In summary: Dude is really good at playing basketball.

What BGJ Brings to the Table
In two words... raw scoring. He is one of those guys that scores so effortlessly that at halftime of a lot of his games you would say, "Anderson didn't do much", then you look at the stats and see that he had 20 points... (in a way this is also a weakness... will get to that in next section). Even though he is right-hand-dominant, he is best when going to his left and likes to either pull up, or jump-stop at about 15 feet... or if he has room he will continue the drive and try to get to the line (7.2 FT's per game last year). Deadly outside shooter...possibly the best, curl off a screen, catch-and-shoot 3-point shooter in college basketball last year, but can also create space for himself to get off open 3's. Incredibly efficient scorer, earning 1.49 points per shot last season. Tall for his position. Above average defender.. which even though that doesn't sound like a huge complement, it really is a plus for a pure scorer to be able to hold their own on defense.

Downsides to BGJ's Game
Once his drives get shut down a few times, he tends to start relying solely on outside shooting. Not great at changing directions when driving... tends to stick his front shoulder out, put his head down, and drive hard which leads to a lot of charges. Doesn't have great court vision, very rarely sets up his teammates. Not exceedingly great at making a basketball move and creating a good shot when offense stalls out...needs the offense to be working to get his shots. As I eluded to in the previous section, a casual fan, and most tv announcers from last season, often don't notice all the things he is doing because nothing about his game is all that flashy... and as such he isn't someone that an NBA teams fans are going to get a huge boner over at first...so in a way, his consistency, and good attitude almost hurt him a little. Last negative - he looks like he is 37 years old.

Draftability
Big, strong, experienced, and polished enough that he would be able to play the 2, or the 3 if necessary, and contribute immediately at the NBA level. He has not really dazzled anyone in workouts but continually performs well in summer leagues. Reminiscent of Danny Granger, or Glen Davis* in that he isn't exciting, and therefore isn't all that sexy of a pick to wow the fans with, but has impressed at every level and looks likely to perform well at the next.

* in draft buzz, not in playing style... that would be Jason Richardson or Jerry Stackhouse.

Who Could Use BGJ?
Any team that needs backcourt scoring right away could use them some BGJ. Let's rule out the first 10 picks as it is very unlikely that he will go this early...the teams after pick #10 that could use a SG of his skill set are:

Notice that all of those teams are mid-to-late first rounders? Look at the three Oklahoma State players picked in the first round over the last 10 years:

It looks like BGJ will carry on the proud OSU tradition of dominating of the mid-to-late first round of the NBA draft.

So Where Will BGJ Go?
I think everyone on that list is a good possibility (with Boston being a longshot, and OKC being an impossible, but hopeful, shot), but since this is a sportsy blog it is in my internet contract that I need to make an overly confident prediction, hours before the actual draft happens, without acknowledging the possibilities of trades, or surprise picks, or anything out of the ordinary occurring as the day progresses. With that in mind.. my prediction, that I am 100 percent certain of, and that anyone that disagrees with must be a know-nothing fat ass... is that James Anderson will be drafted by: 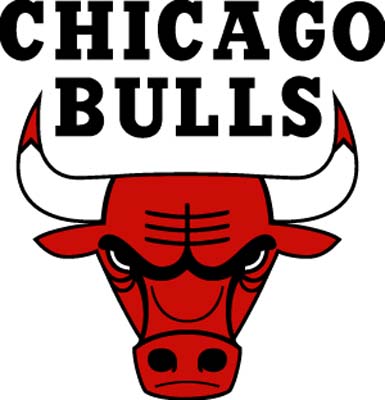 Everything fits perfectly here. BGJ feels like about the 17th pick, he fills a need, and assuming Thibodeau implements a similar scheme in Chicago as he had in Boston, BGJ can grow into that Ray Allen role of slashing, spreading the defense, and knocking down 3's on drive and kicks.

Congratulations city of Chicago (or wherever James actually end up)... you're getting a classy guy that is easy to like, that can hoop, and that is one of Samuel Bryant's ten favorite Cowboys of all-time (what an honor for you).