Share All sharing options for: A&M Pride - Your loss SEC 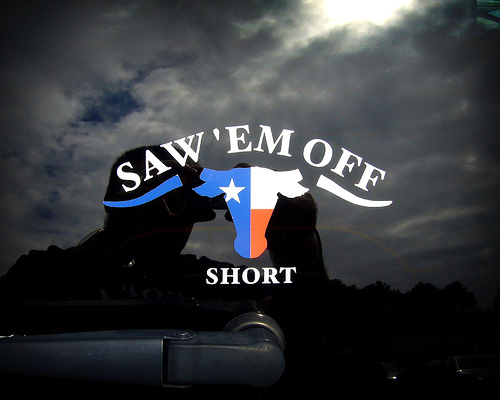 In an inspired move, Doyle Connors (A&M, 2011) recently spent six months showing his maroon pride by finding and purchasing a jersey from every school hated TU will play during their upcoming football season. "I support anyone who ain't TU!" Crow's Conners. "Stuck up T-sippers think they own the whole SWC!"

When asked about his purchases, Connors is understandably proud. "Some of 'em were easy", says Connors when reached on the futon of his College Station apartment, "I mean I already had my saw 'em off jersey and the Tech jersey that my sister bought me when it looked like that was the only place I'd get in."

Others, however, apparently, weren't so easy to come by. "You try finding a Florida Atlantic jersey in size small," complained the diminutive Connors. "I didn't even know what state that was in."

Doyle plans to wear his jerseys to every TU home and away game this year showing those bastard T-Sips just how much he hates them by purchasing tickets on ebay through private sellers and making the road trip from College Station in his 1994 Sentra.

"When I start flashing my upside down horns in their faces and grabbing my own nuts, Varsity won't know what hit 'em," says Connors.