Fact of the Week: Texas Tech Invented Every Tradition

Share All sharing options for: Fact of the Week: Texas Tech Invented Every Tradition 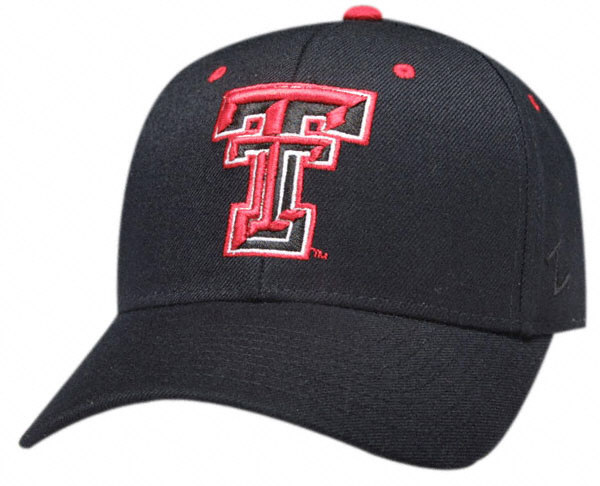 Pictured: Proof that Texas Tech invented the tradition of putting a school logo on a hat.

I honestly don't intend the following statement to be an insult.. but I don't care about Texas Tech. I mean, I care about the fact that they are in the Big XII south, and that Ok-State faces them every year in every sport, and I hope we beat them to improve our chances at winning the south and the conference... but I care very little about Texas Tech fans, culture, traditions, or anything personal like that. There are a handful of schools whom I care about for rivalry, or popularity reasons like, OU, TX, KU, NU, and a few others (maybe even big non-regional programs like Notre Dame and Duke), but Texas Tech just isn't one of them. I am sure that one day I will care about Texas Tech, as my Tech care-level has risen every year since 1996... it just has yet to reach the point where I know things about their school and traditions and what their fans think, etc. I am starting this post by giving you this information not to belittle Texas Tech, but to explain why I have been blissfully unaware that an undetermined number of Texas Tech fans hate Oklahoma State on the grounds that they believe we stole some of their traditions.

Before you think me naive, I was vaguely aware that Tech fans have accused Ok-State of this thievery. But I had assumed it was a one off kinda thing. A few fans just spewing vitriol for the sake of being dickish fans. Every fanbase has those fans and they will pull anything out they can think of in an attempt to get under the skin of their opponents and rivals. These are the types of fans that thrive on message boards until they get banned, and that give their entire school an undeserved rep as a bad host of opposing fans because they yell at, and spit on, them during home games. Well either Texas Tech has a louder variety of these types of fans than most schools (very possible), or they collectively do not understand that most school traditions aren't really all that unique... because apparently enough Tech fans believe this burglary story that the Lubbock Avalanche Journal once did a piece on it.

It just hit me on Friday that this was such a prevailing belief when I read the comments section of the TT blog I posted a link to in Pasted Optimism that featured a well done preview of OK-State's 2010 football team. There were multiple commenters in there calling us thieves and referring to OSU's tradition of tradition stealing. At first I wrote it off to unreasonable commenters being unreasonable commenters (you can't assume every group is just like their most vocal examples, except in the case of female redheads... they are all a perfect mix of insane, slutty, and sexy). 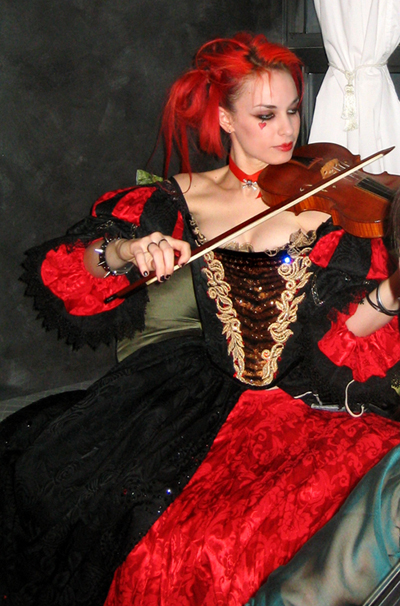 But it did peak my curiosity.. so I began bing-ing the googles for information about Oklahoma State stealing traditions to hopefully get at least some idea of what they believe we stole, and possibly some inclination as to whether this is a popular opinion among Tech fans.

The only two things I found were the Lubbock Journal article I linked above, and this facebook group. The facebook group only has 12 members so I assume that either an unpopular person started it, or most Tech fans are somewhat reasonable, but either way it at least lets me know what traditions we supposedly pilfered. What I gathered, through the combination of these two resources, is that some Texas Tech fans believe we swiped the following traditions from them:

I really don't want to try to prove who came up with what first so much as address the absurdity of thinking each of these things are stolen. (However the Pistol Pete and Spirit Rider are explained in the Lubbock Journal piece... and in case you didn't already know it, here is the whole story behind Pistol Pete.) My point here is that the creation process of each of these "traditions" didn't exactly require a think tank full of tradition scholars. It probably was as deep as, "Hey our mascot is the Cowboys/Raiders... Cowboys/Raiders carry guns and ride horses... maybe we could have a Cowboy looking mascot, and make a gun symbol with our fingers, and have a horse or something." Traditions created... done and done.

And Orange Power vs Raider Power?? Are you kidding me? Surely you guys don't think that an attribute of your team/school followed by the word "Power" is unique to Texas Tech, right? I refuse to look up how many schools, and pro teams for that matter, have chants, shirts, songs, etc with the phrase "[insert team attribute] Power" incorporated into them, because I know that when I run that query through the Dumbfuck Data Analyzer 2000 (ya, I'm still running 2000.. I know I need to upgrade) the results it will spit out will be: "Almost every damn team that has ever existed". 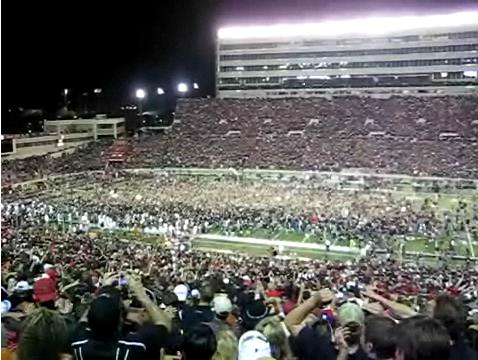 Pictured: Texas Tech fans practicing their sacred and unique tradition of storming the field after a big win. This tradition has been stolen by every university.

So in the end, I now know what traditions these Tech fans believe we poached, however I am still unsure if a lot of Tech fans believe OSU is a tradition stealer, or if it is just a few. For closure, I would love to pose a hypothesis as to why they might honestly believe this (as opposed to say..putting more thought into it than, "Hey, we do this thing and they kinda do to... they stole it... now where is my Brawndo?"), but without knowing if this dim belief really is widely held among Tech fans, I can't be completely sure of where their motivation comes from. If it is an overly vocal, select few mouth breathers, then Ok.. every fanbase has those... just these seem to have latched onto an oddly specific, and baffling, theory for some reason. But if it really is a widely held opinion, then a whole other group of possibilities opens up, such as the possibility that much of the Texas Tech fanbase is incapable of understanding the concepts of basic comparisons, probabilities, timelines, and not being a bunch of fuckfaces.