KU student ridiculed for not being basketball fan

Share All sharing options for: KU student ridiculed for not being basketball fan

Doug Pinkel (KU, 2012) was recently asked to leave the Free State Brewery in Lawrence, KS when he accidently let slip the fact that he's "not that much of a basketball fan." Pinkel, who had been enjoying a few cold wheat beers with his buddies was almost immediately besieged by questions as to just what he meant by his comment and whether or not he was actually a student at the university or a clever plant from a traditional football powerhouse who had been placed at KU to steal Bill Self's playbook.

When it was ascertained that Pinkel was, in fact, serious about just not liking basketball that much the fallout began.

"I can't believe what I'm hearing," said Jeff Conroy (KU 2012), Pinkel's fraternity brother. "I mean I pledged with that dude. I thought we knew everything about each other and now he goes and drops this load of crap." Pinkel's roommate, Pete Simms (KU 2011) was confused and angry as he talked about having his older brother (who went to KU at the same time as Drew Gooden) calling the star to come back to Lawrence and beat the crap out of Pinkel. "Gooden would waste him," said Simms between thinly disguised sobs and gulps of Free State Porter. "I mean waste him."

Other's, while hurt, were more philosophical. "Well if he's not into basketball he definitely won't be in me," said Heidi Cleese, Pinkel's (now) ex-girlfriend. "He can go watch tennis for all I care. I'm going to be playing round ball with his best friend."

Pinkel, for his part, appeared surprised at the heat his comment generated. "All I meant was that I sometimes like to get out and throw the pigskin around every now and then. I mean it's not I like I wished KU had a football team or anything."

Stink in there Doug. Maybe some day they will. 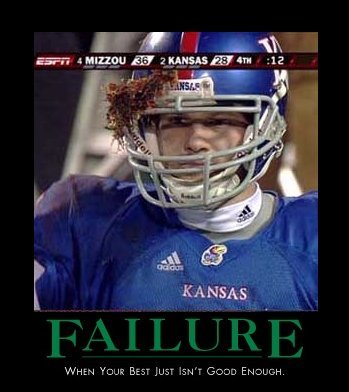