Share All sharing options for: The Fashion Show Moves to Philly (really Orlando) 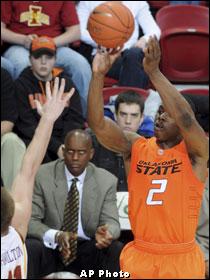 I guess his jump shot goes to Philly also

So Obi Muonelo was picked up to play on the Philadelphia 76ers summer league team in Orlando. Looking though the 76ers summer league roster.. I'm thinking Obi has his eye on Mike Green to play fashion show with. I believe Green will be his choice mainly because he is 6'1, so he would shoot Obi at roughly the same angle Keiton used to. Remember how Keiton Page used to take pictures of Obi late at night while Obi dressed up in different outfits? You remember that right? If Green doesn't work out for some reason (possible reasons are: he is normal, he has some dignity, he has some sense of what might be seen as a strange thing to do, etc.), Jrue Holiday could be a possibility as his years in LA may have desensitized him as to what is normal, and what is so effing weird that it forever changes how the world sees you.

As for whether Obi can make this team or not...it actually is a possibility. I'm not saying Obi is definitely talented enough to be a part of a regular rotation in the NBA... he probably isn't... but neither is Jason Kapono..and Kapono is currently listed as Philly's STARTING small forward. Philly has a definite need at the wing for a player that can play some D, score a little, and that has some muscle...and Obi has those attributes.

It will obviously take a strong showing in summer league games. Obi will probably have to prove, more than anything, that he can contain NBA small forwards, play inside, and hit a few mid-range shots...which he is capable of doing. At least more so than Kapono, and the other SF on the roster, Rodney Carney. (Good lord Philly is weak on the wing!! I guess they can get away with it a little since Iguodala is big for a guard, slashes, and basically plays the wing from the 2 spot... but they obviously have a huge need for some muscle, and some mid-range and inside scoring from the 3 spot.)

Now the elephant I am ignoring here is that Philly did just take Evan Turner with the #2 pick in the draft. Turner doesn't really have a natural position... but with Iggy entrenched in that 2 guard spot, you gotta assume the fit for Turner will be at the 3. However, Turner basically ran the offense for Ohio State so Philly could look to employ a sorta hybrid backcourt in order to keep their two best scorers on the floor as much as possible... which leaves openings for two SF's to be on the active roster and Kapono, Carney, and The Fashion Show could be competing for these 2 spots IF Obi plays well this summer. Or, if Obi can play a little faster, and he has shown in spurts that he is capable of playing faster, he could simply become a rotation guy as a 2/3 combo, backing up Iggy and Turner.

This is all getting way out in the weeds though... the only thing Obi can really focus on right now is showing something that Kapono and/or Carney can't give the 76ers. And since Obi is two inches shorter than Kapono and Carney, yet outweighs them by at least 20 pounds, I would say that his main objective should be to try to muscle the hell out of some people, and add some toughness to the team.

Probably the best case outcome is Philly signs Obi, sticks him on their development team for a year or two, and if he shows he can provide some defense, some mid-range scoring, and most of all, toughness.. he could have a roster spot in 2012 (assuming John Cusack doesn't end the world (I never saw that movie)). Or, there is hope that another team likes what they see from Obi this summer...playing on Philly's summer team does not mean they have any kind of exclusive rights to him, so he could theoretically go to any interested team if Philly doesn't sign him.

Well stick with wastedoptimism...we will do our best to keep you updated as to who Obi's roommate is, who he plays "fashion show" with, what he wears, and how he looks in it. Oh.. I guess we will also let you know how he plays, and if he gets a contract.