Who is Even Ready-er For Washington State?

Share All sharing options for: Who is Even Ready-er For Washington State? 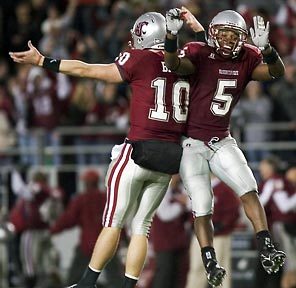 Welcome to Part 2 of the one-part series: The Official wastedoptimism Washington State Preview

If you missed Part 1, Click Here. Also click that link if you are a Hawaiian that is looking to be linked to the Steeler world.

Part one of the preview focused mainly on the Washington State offense (to recap: it's bad). Today I will tie up some loose ends from yesterday, take a look at the Cougs defense, then conclude with one of my patented, dead-the-eff-on predictions. On to the preview...

I didn't make it around to this when previewing the Cougs offense yesterday as I had to cut the post a little short thanks to a toxic combination of cran-tinis and pepper spray, so you get it today. If I may use a pun to sum up my opinion of the Washington State offensive line... they are really "line" (I don't think I did that right). However, what the Cougars o-line lacks in run blocking ability, pass blocking ability, and not being horrible ability, they make up for in experience. Every member of the line that allowed 53 sacks, as well as cleared a path for their RB's to to rack up 2.4 ypc last season, returns with the exception of 4-year starter Kenny Alfred, who was widely considered their best blocker, and was the only Cougar to be named to the All Pac-10 team last year. To sum all that up: The Wash State o-line lost their best player, and they have a lot of valuable shit-xperience.

The Defense of Washington State

Alright...now we get to heart of the Cougars....the meat...the badboys of Pullman... the Washington State Defense.... that it says here finished 2009 ranked dead last in total defense. They allowed 38 points per game, 7.1 yards per play, and opposing QB's averaged an astonishing 151 QB rating against the crimson and grey disappointment machine. I don't know what else to say here..I mean every stat I look up is more bleak than the previous. I never knew that a team preview could be this depressing. Every Wash State statistic site should play Elliot Smith songs in the background.

The one bright spot of the Cougs defensive unit is Sophomore DE Travis Long who started all 12 games last season as a freshman and racked up 47 tackles and 2 sacks. After that, the rest of the defense is mostly unsettled as the Cougs return a bunch of below average dudes from injury, and their backups that saw the field more than the has-to-be-prozac-addicted Paul Wulff would have preferred. So, like the offensive line, they have a ton of depth and experience, but that experience is what allowed 35 rushing TDs last year.

Oklahoma State would be well served to stick to attacking the main weakness of the Wash St defense, stopping the run... oh, and they are really terrible at stopping the pass too. This is a defense that "held" opposing teams to 6 yards per carry and 275 yards per game through the air, and created the need for a press box gentleman's rule that opposing offensive coordinators would stop screaming things like "That play has never worked before!" and "My daughter just texted me that play...honest to god...my 7 year old daughter!". And let me reiterate...this season they have the same defensive unit, running the same defensive scheme that the Cougars ran last season. I see no reason that Brandon and Kendall don't have monster games. And speaking of Grandpa Weeden...this is a great matchup for him to get his feet under him as this Wash St defensive unit only managed 13 sacks all of last season. THIRTEEN! all caps exclamation point.

So that is it for my "analysis" of the Washington State defense. Really what else is there to say... they have few strengths, a lot of weaknesses, and at most show potential for very slight improvement. I would set the over/under for O-State total points at a yet-to-be-invented number that I can best describe as the number 50 blowing a division sign.... and I would still take the over.

As expected they have a good punter, and terrible kickoff coverage. When you out-punt your opponents 87-43 your punter is bound to be good, and when you only kickoff 37 times your coverage team is bound to get rusty. Opposing teams averaged 28 yards per kick return last season, good for a ranking of (say it with me), dead last in the nation.

No need for words here, I think I will let a collection of 2009 statistical rankings sum this whole thing up for me. Warning: Reading the following rankings may render you flaccid for the next three days. 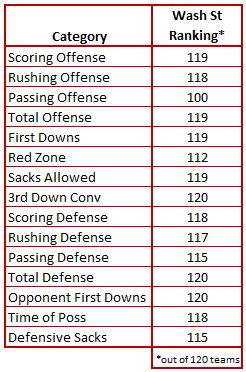 Given the tone of this writeup, you probably think I am going to say O-State by 40 or something along those lines. Well first off... quit thinking you know what I'm gonna do..I am my own man, Dad. Secondly, you are right. My iron clad, can't miss, dip it in bronze and put it on the mantel next to your Jamal Fobbs autographed Nathan Simmons card, is:

Now stick that in your Wazzou! (sorry)