Share All sharing options for: Cincy and Sam Answer Some Questions: Part 1

This is a new feature here at WO where Cincy and Sam will each offer our take on a variety of questions, most of which will focus on how things will shake out for Oklahoma State, and the Big XII, in the 2010 football season. Some of these questions were submitted by our loyal readers, some came up in everyday conversation, some were part of a Chinasa sex-dream, and some were just made up. As always, every answer and prediction should be taken as 100% fact... wager accordingly.

Question #1. Which Big XII team will be the biggest disappointment compared to their pre-season projection?

Sam: In my opinion, there are two great candidates here, but I am going to pass over A&M and go with Nebraska (sorry Peliniacs). I will try to keep this brief, but my main reasons for thinking Nebraska will not be a national title contender mainly have to do with losing Suh. I understand that one player does not make an entire defense, but in Suh's case... maybe he did. Bill C from Rock M Nation and Football Outsiders does an excellent job of explaining this in his Nebraska D preview:

"When we read about how the Pelinis have figured things out, and how the defense was more than just one person, and Nebraska can expect to be just as good or better on defense despite the loss of House of Spears, all I can say is ... prove it. I don't mean that in a smack-talking way, I just mean that ... damn, Suh was amazing last year. He commanded double- and triple-teams, opened up the blocking for the rest of the line, and still put up those stats. There is no doubt in my mind that the Nebraska coaching staff had something to do with his success, and that they can be expected to coach up Jared Crick and other tackles in the future ... but that was a once-in-a-decade type of performance last year. And the thing about once-in-a-decade performances is ... they don't happen every year. (Brilliant observation, I know.)"

Outside of that, I am down on Zac Lee, and really the offense as a whole who was just a mess of inconsistency last year, highlighted by the up and down efforts of QB Lee. The O-line ranks about the middle of the Big XII in talent, and the receiving corps doesn't have much punch outside of Niles Paul, so Helo Jr is going to have to stay healthy and have a 1500+ yard season (which is very possible) to keep the offense moving.

Because of all these briefly summarized factors, I predict that Nebraska will not meet expectations in 2010. Now I don't mean to completely dash the hopes of Ivory Nation... I do think a 10 win season similar to last year is possible, I just think the high end hopes of running though conference play undefeated, followed by a BCS title game berth, are quite a stretch. I don't see Nebraska staying the the top 5, I don't see them heading to a BCS bowl, and I can't actually see their fans as they are practically translucent.

My prediction is 8-4, which should still be enough to take the North.

Under Mike Leach, the Red Raiders became one of the most high powered offenses of all time. New head coach Tommy Tuberville has stated that he will keep things "mostly the same" and will just "refine the offensive scheme that Leach had in place" with a more balanced attack that is focused on running the ball.

In my opinion, Tuberville is from the old school. He wants to play solid defense, control the line of scrimmage and run the ball with authority. Sure, he went out and hired Troy Offensive Coordinator Neal Brown to run the offense, but that doesn't mean they'll be dinking and dunking it like they were under Leach.

Mike Leach didn't recruit guys that were meant to play in a Tuberville style system. He mostly focused on small wide-outs that could get open, lineman that really didn't have to do a lot of run blocking and defensive guys that were leftovers from all of the other Texas and Oklahoma schools. Simply put, he recruited niche players. That niche worked in the Leach "system", but it won't work for Tubes.

I honestly expect Tech to finish 6th in the South, behind Baylor and Texas A&M.

After the Jump, a few more questions, and some even hotter answers

Question #2: Which Big XII team will finish much better than their pre-season projection?

Cincy: This one's an easy one. Oklahoma State.

Sure, we lost our starting QB, WR and stud O-lineman to the NFL. Call me crazy, (or a homer) but I really don't see that as a huge setback.

Robinson certainly wasn't the same quarterback last year that he was in 2008 and we lost Dez after the Houston game. Okung will be missed, but we were without all american running back Kendall Hunter, so maybe Hunter's skills make up for that loss.

I believe that Holgorsen will be Holgorsen, and Bill Young will be Bill Young. That translates into an offense that puts up big numbers, and a defense that is better than most.

I think OSU will be a lot better than people think. At a minimum, we'll be better than Baylor. Sorry Art.

Sam: I think the obvious choice here is Oklahoma State (and hey, it works out perfectly that this is an O-State site), but in an effort to add some variety here, I will go with the team most publications are picking to finish 6th in the North division, Iowa State. While you may scoff at the idea of the Cyclones making some noise in their first season in the Big XII, they may have the pieces in place to surprise us in 2010.

First off, their schedule is just brutal, so expectations need to be tempered based on playing such a tough schedule (aka: the schedule South teams play every year + Iowa). A six win season would be outstanding with this schedule, but I think they are capable of this, and maybe more. (and in the North, 7 wins can equal a trip to the title game!)

ISU returns 8 starters to the offense including standout running back Alexander Robinson, and experienced QB, and smooth MF, Austin Arnaud. On the other side, the defense loses 6 starters but all were either on the line or at the linebacker spot and were part of a unit that was widely considered one of the worst in the Big XII last season... so really, are they losing anything that great? They do return all of an effective secondary, including Big XII newcomer of the year David Sims, and although the Clone defense is prone to giving up a lot of yards, their bend-but-don't-break approach proved effective against some elite teams last year.

Mostly I have faith in, suddenly everyone's favorite, Paul Rhodes. A rational dude that is a good motivator, and seems like someone a player would want to play for. Check out this interview with him for proof. How likable is that guy? Don't you just want him to show you how to execute a perfect form tackle?

I think a 6 win season is doable, putting them somewhere between 1st and 4th in the North.

Question #3: Does Landry Jones have a mustache?

Sam: Absolutely not. I mean it varies from picture to picture, but even in his most mustachy-looking pictures he does not have a man's mustache. Tom Selleck has a mustache. Sam Elliott has a mustache. 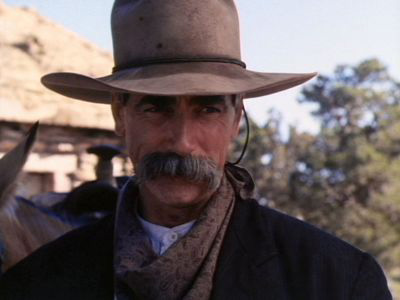 You are welcome ladies.

That thing Landry Jones has, and every hipster out there wants to have, should not be called a mustache. It is peripheral lip hair... it is the male landing strip. Good, honest mustaches should not be lumped into the same category as Landry's vulva-stache.

note: I kinda feel like Jones is one of those guys that grows facial hair only on his upper lip, and a little on his chin, so that when he goes a week without shaving it looks like he is growing a mustache... so really he may not be trying to have a mustache at all. This may all be one big misunderstachingTM.

Cincy: I can't compete with the answer above so I'll say....Kinda.

Well the first three questions ended up running a lot longer than we expected (yes, this is radio), so let's go ahead and break this into a few parts. Look for Part 2 to be up next week.