There’s no question that the best athlete on the line is 6-5, 252-pound Senior Defensive End, Ugo Chinasa.

Chinasa led the team last year with 6.5 sacks, and 30 tackles total. Since 1991, only one cowboy has had at least 10 sacks – Greg Richmond in 2003. Chinasa has the speed and tenacity to be a special player. It’s time for him to step up, and be All Big 12 caliber.

Working with Chinasa, on the other end, will be Richetti Jones.  Jones was considered one of the nation’s top end prospects before suffering a hip injury late in his high school career. He has been "good", but he hasn’t been anywhere near what was originally expected. I expect him to grow into even more of a factor. He has turned into a bit of a pass rushing specialist and the 6-3, 264-pound junior has the raw skills to live up to his original billing. 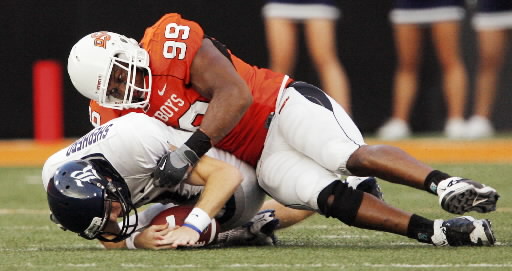 Is this the year for Richetti Jones?

Jamie Blatnick should see alot of time as well.  The 6-3, 270-pound junior was serviceable last year with 28 tackles, 1.5 sacks and 3.5 tackles for a loss. He seems to have good size and is smart, but he hasn’t shown the speed to get to the quarterback, even with all of the attention being paid to Chinasa.  Word out of Stillwater is that he’s dropped some weight and added some muscle. Hopefully that translates to more "flash" and a better pass rush.

Chris Donaldson wasn’t a major piece of the defensive puzzle last year, but he played in every game after Georgia and finished with nine tackles. He’s a smart player who, at 6-1 299, has the size to anchor the middle this season. He’s much better than his stats show and could quickly become one of the team’s most important linemen, especially when it comes to stopping the run.

Shane Jarka is a versatile veteran who is able to play both inside and out. Although he’s battled the injury bug, he had a decent year as a key backup making 18 tackles, 1.5 sacks and five tackles for loss. He’s 6-3 and 295 pounds with good speed to pressure the quarterback and present problems in the backfield. The key to Jarka’s success is staying healthy.

At 6-3 and 265 pounds, Nigel Nicholas is undersized but as proof from his play in 3rd down packages last season, he can move. He’s extremely quick off the ball and is very strong for his size. He’s built to be an end in a 3-4 but he’ll be just fine in the Bill Young 4-3.

This should be a solid Defensive Line. The Defensive Ends (Chinasa, Blatnick and Richetti) should all take turns having big games on the outside, so the hope is they blow up each game with their combination of size, quickness, and experience. Hold down the middle with Donaldson, Jarka and Nichols and you’ve got yourself a solid D.