Is Kansas a Trap?

Share All sharing options for: Is Kansas a Trap? 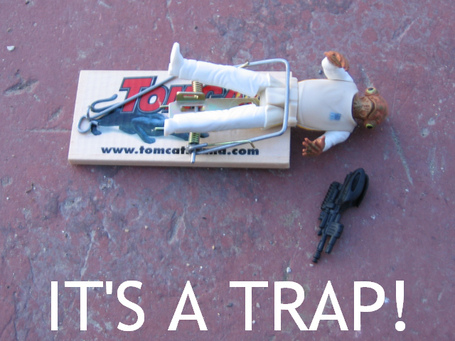 via trapblog.org You know its a good post when you get to cite a Trap blog.

Let’s take a look at the upcoming Kansas game and the sole question of whether or not it’s a trap...game. This is my first article here at CRFF(Also Sam the bank will not cash that oversized check you gave me as a signing bonus) and I won’t be doing a full matchup or game preview. I'll leave that up to one of the senior writers. You hear that? By bringing on new staff members you automagically gave yourselves promotions! I’m going to keep this fairly short so first off, why it could be a trap.

Why It's a Trap

Oklahoma State just beat Texas in Austin for the first time since the Revolutionary War (May need fact checking). It's looking like the battle for the South will be decided in Stillwater on Thanksgiving weekend between the Cowboys and their bitter rivals and poor Kansas finds itself in between. Kansas is currently ranked #7 in the nation and just posted an impressive 113-75 win over UNT. My apologies that was the wrong ESPN page, the Jayhawks are actually unranked at 3-7 with their lone conference win coming against Colorado in a truly Disney Movie-esque 4th quarter comeback.

It's easy for any obnoxious fan to post on a message board somewhere that obviously OSU will look right past the Jayhawks to the upcoming Sooner showdown and come out flat in Lawrence. The Cowboys are favored in a Bedlam game that puts OU in a vulnerable position on the road, so maybe the players are already looking ahead to a rematch with the "Pale People" of Nebraska in Arlington next month. The Kansas game is the last away game, and it’s always tough to win on the road in the Big12 (-2), but Memorial stadium isn’t known to be a hostile environment like Austin or Lubbock. These are valid reasons the game could be a trap, but the big reason why this game is not a Trap is because it’s the friggin Kansas Jayhawks.

Why It's NOT a Trap

First of all, I know nothing about Kansas. When I used to think "Kansas Football" the first thing that came to mind was "Round Head Coach" I've read bits and pieces about this team and their new coach Turner Gill and I do remember that they did beat a #15 Georgia Tech team in the beginning of the season, but that same team has lost its last 3 games. I have not actually seen them play but did listen to about 5 minutes of their game against Baylor that went something along the lines of "Touchdown Baylor!... Kansas Intercepted!.. Touchdown Baylor!" If you’re getting blown out by Baylor you know your teams in trouble. Baylor is a solid team this year, but 55-7 is a little more than embarrassing. Kansas lost their first 4 conference games by a combined 187-30, in these 4 games combined they are still 2 touchdowns short of OSU's average of 45 points per game and are giving up 46.75 points per game. I could go on but this gets cruel and repetitive, plus I don’t want to use up all the "Why Kansas is So Bad" stats before we preview Saturdays game, if that’s even possible.

In closing, if this was Troy, Houston, Iowa State?, or a team that was a clear underdog but has a lot of talented playmakers I would worry that OSU might overlook them and possibly lose a game it should easily win. This OSU team has really been playing with a chip on their shoulder all year. They were predicted to suck (Read the last paragraph in that article and then laugh at Matt Baxendell), and then it was down played every time they won that their opponent wasn’t very good. They are starting to get some respect, but most bowl predictions still list them losing to Nebraska and going to the Cotton/Alamo bowl. This team is still really young and I don’t think they are going to start buying into how good they are and take a week off. Anything can happen on the field, but right now my scientifically calculated chance for Kansas pulling this upset is 4.333 repeating of course percent. Even if Weeden throws 2 INTs, Hunter struggles on the ground, and Blackmon only gets lets say "half" his average we still win this game. So in short NOT A TRAP!