The final results for the inaugural CRFF Running Back Ranking are in, and we're ready to crown the winner.

It's not either of the preseason All Big 12 selections... 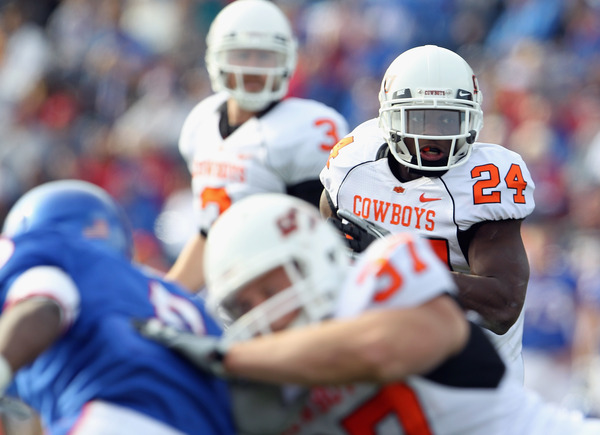 Congrats Kendall Hunter! You are the winner of the inaugural Cowboys  Ride For Free running back ranking.  Send an email to cincyrides@gmail.com and we'll hook you up with some free swag. Seriously!

What a beast Kendall Hunter has been this year.

He's currently third nationally with 1461 yards on 248 carries. He's got 16 touchdowns to go with that and he's not done. The somewhat suspect Oklahoma Sooner run defense awaits...

You could argue that the toughest running game they've seen all year was Air Force - and the Sooners gave up 351 yards. Against a back up running back in college station, they gave up 122 yards. Hell, they even made Missouri's running game look good!

I fully expect Hunter to break the 1600 yard mark this week and continue his campaign for the Doak Walker award. He's up against LaMike from Oregon, with whom he's about even with and John Clay of Wisconsin. Which begs the question...Who the fuck is John Clay??

Congrats once again to Kendall Hunter. What a career he's had here at OSU. It's not over...

Other awards of note:

The guy has only surpassed the 80 yard mark 4 times this season and two of those were Utah State and Air Force. His 4.4 YPC average says it all..

Stewart is just 10 yards away from being a top 10 running back nationally. He's got 1230 yards and 10 TD's. That's better than Demarco Murray AND Daniel Thomas.

946 yards and 9 touchdowns isn't too shabby, but I expected more. Unfortunately, he plays for an offense that struggles to move the ball and that limits his explosive potential. I really thought he'd do more.

Coming in to the season, there were a lot of guys that "could be big" for the Longhorns. All of them have had good games here and there, but noone really established themselve as the leader. Where are all of the 5 star running backs??

We'll be follwing the performances of Kendall, LaMike and John Clay?! over the next two weeks to see who