Share All sharing options for: Oklahoma State 51, Virginia Tech 56 : The ugliest 30 minutes of basketball ever played

*I am channeling a little Holgorsen for this headline.

Well the first 10 minutes was nice.  Good flow, both teams were scoring (it was 22-18... on pace to score in the 80's), ball movement was impressive, shots were falling... then each team figured out the others weakness, and it turned into the ugliest thing I have ever watched for the next 30 minutes.

What the Cowboys figured out was that Virginia Tech cannot shoot from the outside....let me rephrase - they cannot make shots from outside... they are really, really good at shooting it from outside.  And on the other end, Virginia Tech figured out that Oklahoma State's guards cannot handle defensive pressure at all... and that is what was most scary about this game... not the loss, but the glaring weakness that was exposed.

The last 30 minutes (and especially the last 5 minutes) provided the blueprint for holding the Cowboys to single digits for the first time ever in a basketball game. The Hokies extended pressure to close to halfcourt, and the Cowboys guards were helpless to do anything about it. 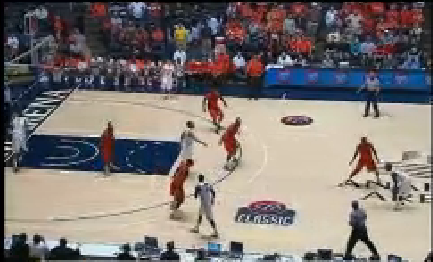 Ya... the picture is fuzzy, but you can still count the number of VT defenders (in orange) that are near or outside of the three point line (the answer is 4) while Oklahoma State remains in its standard offense and hopes Penn can handle all the perimeter pressure by himself (spoiler: it was not successful)

Now, this was one game, and maybe Travis will focus on this going forward and come up with some sets to handle the extended pressure... but right now, these guards cannot handle it on their own.

On the positive side, Jean-Paul Olukemi showed a lot of potential and is starting to show the skills to become the scorer from the wing that we sorely need.  Marshall Moses was dominant down low (when he was hitting), but I would like to see him pass out of that double team a little quicker as he will probably start getting doubled a lot more frequently.  And Matt Pilgrim had a nice ejection (way to go Matt) for stepping through and elbowing the hell out of some dudes jaw for the second game in a row.

I will put up a little more basketball recap on Monday (here is the Virginia Tech recap)... but that is enough Bedlam distraction for now... so let's go take the damn Big XII South Pokes!!!