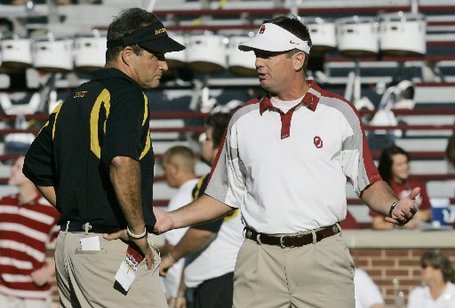 The Big 12 finalists for the first annual Joseph V. Paterno Award, or college football's coach of the year are Oklahoma's Bob Stoops, and Missouri's gary Pinkle. I cant think of any other coaches from the Big 12 that diserve it more. Stoops took a loaded OU team that has been a favorite in the south all year with hopes of another Big 12 Title and National Championship berth to a steller record of 7-2, 3-2 conference and is currently tied for 4th in the big 12 south! Pinkle took a Missouri team to the top of the world with 7 straight victories including a win over the #1 team in the nation OU! Since then Pinkle's Tigers have gone on to lose to Nebraska and Texas Tech putting the Big12 North Title and a BCS berth all but out out of reach barring a Nebraska collapse down the stretch of the weaker part of their schedule.

Some may say that Art Bryles Baylor team picked to finish in the bottom of the Big 12 south becoming bowl eligible for the first time in 1994 should be on their, or possibly Mike Gundy taking a team picked to finish last/next to last in Big 12 South to a 8-1 season and currently in 1st place should be mentioned, but those people are biased a-holes. You could make a case for Bo Pelini, but he choked slammed the last guy that did and we still really don't understand why. All in all I can see no reason these two coaches should not be on the list of semifinalists that for whatever reason comes out with 3 games still left to be played.

I sure hope OU despite dropping games to both Baylor and OKlahoma state bounces back in the Insight bowl with a big victory and Stoops is named Coach of the Year! Is he the right man for the job in Dallas?