Farewell to Bo Pelini and His Huskers

Share All sharing options for: Farewell to Bo Pelini and His Huskers 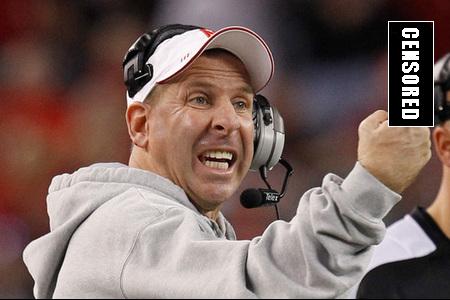 Bo "Big Balls" Pelini has never been afraid to express his opinions on the field.

This is the last year of the Big 12 as we shrink to 10 teams due to Nebraska and some other team from the North I cant remember moving to the Big 10 which grows to 12 teams in a well rounded sense of irony. Last week I wrote an article that really called out Nebraska fans for their shocking transformation from eerily nice to tinfoil hat insane. But wanted to give them a proper fairwell so I wont recieve any ticking packages original intended for Dan Beebe. One thing I think we all loved about Big Red was their coach Bo "Big Balls" Pelini. Don't think that nickname was used enough since the move to SB Nation. Bo was a dynamic man, and a lot of fun to write about make stuff about.

I'm going to try to not kick the Huskers while they are down, but just touch on their departure. What started Saturday night as a Sooner bashing party(something not unappreciated here) turned into a turnover ridden meltdown of epic proportions. We Cowboy fans have known such defeats, but im not sure if ever on as grand a stage. Your a team that has declared war on an entire conference and on the cusp of beating their champion in the last game you will play before flipping them the bird and leaving for "better" things, and then 24 hours later you've lost the championship, lost the shot at a BCS bowl, and got passed up for Missouri for the Insight Bowl. I mean thats a really tough pill to swallow and takes a little bit of the sting off of our Bedlam loss as bad as it was. From what I have read around Husker sites the "Whoever is writing the check" Holiday Bowl against a Washington team you already thrashed isn't being embraced by the corn people. There is already wide spread word of another Big 12 conspiracy in which the conference pressured the Insight Bowl not to take the Huskers. So the Huskers will face off against the Huskys in a battle for the... Husk, and then depart for the Big TV money.

As a Cowboy fan I harbor no bad blood with these pale people to the North. I was surprised at all of the crazy things surrounding their departure, but will miss this team. We all fell in love with their coach Bo as he walked in, punched us in the face, spit on our limp body, and left the room muttering something about "fairy boy". Also in a stat I just made up for this article It is said that Pelini has screamed the "F" word 52,546 times during conference games in his tenure in the Big 12. Its undetermined how many obscenities he has shouted during practices. Some stories surfaced about his brother Carl assaulting a TexAgs cameraman with a baseball bat(Source: Some message board somewhere) but I'm pretty sure thats only half true. A lot of people will hold a grudge blaming Nebraska for the Big 12's collapse. They in turn will point the finger at Texas' greed. In reality they are both probably partially right, but all arguments aside the Big "Whatever the hell we are calling it these days, im sick of making up clever names" is a lesser conference without them. Good luck in the Big 10 Big Red, please kick the crap out of Ohio State for us.