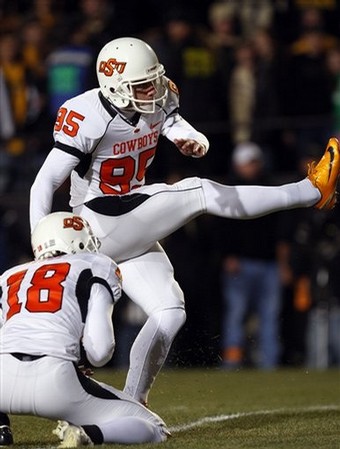 Dan Bailey is a good kicker, but he hasn’t been consistently great at 30-41 all time.

He showed good strength with a 51 yarder against Missouri, but he missed several makeable ones down the stretch.  Luckily, those weren’t in critical situations.

I think having a kicker that is around 70% adds a lot to the game experience.  Sure, it would be great to have someone that was automatic, but what fun is that? Bailey will most likely make everything too, but there’s a chance he won’t. We’re talking edge of your seat entertainment here!

To be considered great, he’s got to hit everything inside 50 – and continue his streak of perfection with the extra points.

Replacing Ray Guy winner Matt Fodge last year wasn’t an easy task, but Quinn responded with a brilliant average of 45 yards per kick.   It was the 5th best average in the NCAA last season.  He put an unbelievable 24 punts inside the opponents 20.  4 of those came in the Cotton Bowl against Ole Miss.

This year, he’ll be on everyone’s radar and will be in the hunt for the Ray Guy Award if he busts out another year like last.

Overall, Bailey and Sharp will be a positive for this OSU team. I expect Sharp to make a consistent difference in field position and Bailey to bring home at least one, maybe 2 game winners.

OSU’s coverage teams were a disaster in 2009 allowing 24 yards per kickoff return. The punt team allowed almost 18 yards per punt return.  Judging from comments made by Gundy and  special teams coach Joe Deforrest, I think that will change this year. As of today, OSU has five true freshman starting on kickoff coverage.   The speed we’ve heard about should be the difference this year.

Perrish Cox was the man, but who will fill his shoes? Victor Johnson should return kicks.  He’s done it for 2 years so he’s really the only one with experience.  Freshmen Joseph Randle and Justin Gilbert will have an opportunity to return some kicks, as well.  Kendall Hunter may even be in the mix early too, but let's hope not.

Josh Cooper will return punts, along with Randle.   It really appears to be wide open. Oklahoma State has a lot of good, speedy athletes and the best ones will return the ball on punt and kicks.

I fully expect our special teams to be one of the strengths of this team. We were good last year, but our coverage was horrible. We still have the leg of Sharp that will give us good field position and Bailey will make most of his kicks. The added speed and athleticism of the freshman class will make an immediate impact, and Oklahoma State will have one of the best special teams units in the league.