As we discovered in Part 1, the Troy offense is dealing with the departures of key components in Offensive Coordinator Neal Brown, and quarterback Levi Brown (relatives?). So whether the Troy offense can perform at the 3rd in the nation level it did last year will have to be seen, but what about the defense? What can we expect from the fellas that will try to stop the Million Dollar Man Brandon Weeden and Mr. Kendall Hunter from running it up and down BPS?  Let's take a look.

The Troy Defense
The defensive unit from 2009 is pretty well gone (5 returning starters), but on Troy's bright side, the 2009 defense was ranked 104rd in the nation in total defense, so good riddance say the fans of Troy's defense. Especially painful losses are All Conference defensive ends, Brandon Lang (the guy from "Two For the Money"?) and Cameron Sheffield, along with linebacker duo Boris Lee and Bear Woods.  Also worth mentioning, those names are completely badass.  It would be an honor to be tackled by Bear Woods. So Troy is coming off a down year on the defensive side, and now have to replace a majority of the starters. Here are the rest of the Team Defense rankings from 2009.  Spoiler: they aren't very good.

The Fellas
Let's start in the most "help needed" area, the Secondary.  This is a unit that surrendered 287 passing yards per game in spite of having two All Conference pass rushers putting constant pressure on opposing QB's, and overall finishing tied for 22nd in the nation with 33 sacks.  Now I am no defensive genius (not yet), but even I can deduce that if you are getting pressure on the QB, yet still giving up that many passing yards, there are probably some coverage issues in the secondary.

Bryan Willis (So 5'9 182) was the starting corner last season and finished with 73 tackles.  The problem with that stat is that he is a cornerback. To acquire 73 tackles from the CB spot, either Troy is running some bizarre scheme, Willis was over-committing to the run, Willis was allowing too many balls to be caught, or all of the above. In contrast, our leading CB tackler was Perrish with 36.  So as odd as this sounds, Willis' area to improve this season is probably "make less tackles".  At the other corner is KeJuan Phillips (So 5'9 176), who will be a first year starter, and actually didn't play at all last season due to academic issues.

At strong safety, Barry Valcin (Sr 5'11 195) takes over the starting role after playing on the corner in 2009.  He brings a little size and some hard hitting to the safety position that should compensate for his lack of one-on-one cover skills.  At the free safety is Willard Ross (Sr 6'1 196) who is a converted running back... which is code for "the fastest, most athletic guy on his high school team".  Valcin has good size and is thought to be more of a run stopper.  We will have to wait and see what kind of cover skills he has developed.

Moving up to Linebacker where the amazingly named Bear Woods and Boris Lee will have to be replaced by Xavier Lamb (Jr 5'8 222) at MLB and Donnell Golden (Jr 6'0 228) at WLB. Not much is known about Lamb at this point as Boris pretty much kept him off the field, but he is billed as a quick hard hitter... and being severely undersized, he will need to utilize that extra speed to have an impact. Golden on the other hand is someone whose talents Troy has been excitedly waiting to unleash.  A former track star, Golden is one of the fastest guys on the team and is said to be one of the more athletic as well. On the Strong Side, Daniel Sheffield (Sr 6'3 206) returns after starting every game in 2009.  Hold on... 6'3 206... and he is a linebacker? Well he had 54 tackles last year, so I am guessing that he can hold his own. He was brought over from his more natural DB position last year to fill a need at LB, and apparently they are keeping him there. Sweet picture of him in a sleveless jersey here.

The D-Line, as mentioned above, loses its two key pass rushers in Brandon Lang (did anyone see "Two For the Money"?  McConaughey was so uncomfortable in that role) and Cameron Sheffield. Jonathan Massaquoi (So 6'2 250) and Mario Addison (Sr 6'3 240) will attempt to replicate their productivity at the defensive end positions. Massaquoi has put on 25 pounds since last season, and if he retained all of his quickness and athleticism, he could be a force on the end.  Addison was in the mix quite a bit last season, seeing a lot of time on special teams and even had 32 tackles and 2.5 sacks as a backup on the D-Line.

In the middle will be Tony Davis (So 6'0 257) and Riley Flowers (Sr 5'11 280).  (The official Troy depth chart lists the starting DT as Tony Clark, but I am going to assume that it is Tony Davis as he is the only guy named Tony on the roster. Show the man some respect troytrojans.com depth chart!)  Davis has bulked up a little since last season but is still quite undersized to play the interior in the FBS.  Flowers is undersized as well but not to the extreme that Davis is, and Flowers possesses good interior line strength and quickness to disrupt some things in there.

The Scheme
The plan will most likely be to mix in a lot of different guys, and a lot of different looks to combat the beating all the undersized linemen and linebackers will take.  I would expect plenty of 5 and 6 DB packages being used, as well as possibly a switch to the 3-4 Defense when certain personnel are in there, or even permanently.  Much like the offense, this will be somewhat of a wait and see, but there is no doubt that this unit will have to improve as the offense can't be expected to put up 34 points a game as they did last season. So to sum up, the most needed area of improvement for the defense, is playing defense.

Special Teams
The big story here is the same as it was on the offensive side, Jerrel Jernigan.  The dude was born to be a kick returner. Here is a highlight video of him that features a lot of him in the return game, as well as making a catch by pinning the ball to the back of his helmet.  Outside of Jernigan, the rest of the special teams is pretty ordinary. The role of primary punt returner is still up in the air, place kicker Michael Taylor was 11-14 on field goals with a long of 46 yards last season, and punter Will Goggins averaged 41 yards a kick.  What a special teams review.  Don't you feel like you are a part of this unit?

The Prediction
With both teams breaking in a lot of new players, some might assume this has the makings of an ugly, turnover laden, learning experience for both teams.  But with the obvious size and talent disparity in favor of the good guys, I wouldn't expect this one to stay close for very long. On top of that, the small, untested, and poor track record of the Troy pass defense sets up perfectly for a Cowboy team that will still be looking to stretch the legs of their new Air Raid scheme.

On the other hand, Larry Blakeney has accomplished a lot with talent that most schools don't even look at, much less recruit. He has turned walk-ons into NFL players, and had his team playing above its head for 20 years now. So this team can't be taken too lightly. But in the end, the talent differential will just be too much for the Trojans to overcome. 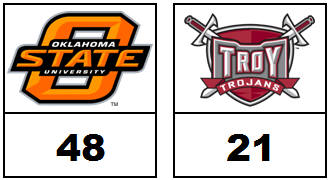 One More Picture of Bear Woods 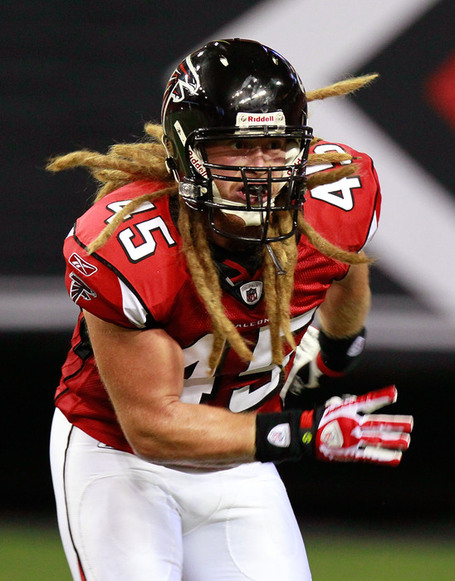