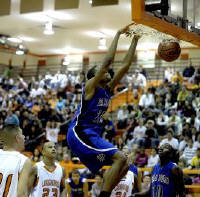 Well, basketball season is only two months away, and as a result my "time to write about basketball" alarm went off on my Palm Pilot today.  And since it is 2001 and I obey my Palm Pilot, let's learn a little about the most exciting new face on the Cowboy basketball team, Michael Cobbins.

Michael Cobbins is a 6'8 215 Power Forward from Amarillo (Palo Duro) who will be leaned upon heavily by the now Anderson/Muonelo-less Cowboy squad. These high expectations come from Cobbins' good size, his versatile playing style, and the fact that he comes in with some big time recruiting ratings:

Clicky the Jumpy for more Cobbins.

Though he is listed as a PF, Cobbins plays all over the court.  He has impressive passing skills and handles for a guy his size, the speed to defend perimeter players, and he can get up quick to block shots and snare rebounds. He is a hustler who comes up with a lot of loose balls and gets a lot of his points off tip ins. He also has the absolute best trait a forward can have, he is left handed.... a matchup nightmare.

On the offensive end Cobbins moves around a lot, but he can post up when he is manned up underneath, and he can beat guys off the dribble or pull up from the outside.  He also likes to streak down the lane to make himself open for an entry pass, or to crash the boards. His shooting range is solid inside of 17 feet, but he can extend out to the 3-point line, and he is thought to have a high basketball IQ.... as is evidenced in his remarkable passing abilities. This passing ability should pay off big for the Pokes as utilizing Cobbins in the inside-out game should lead to a lot of open threes for dangerous outside shooters Keiton Page, Ray Penn, Nick Sidorakis, etc. So while Cobbins may not be able to replace the scoring of Anderson and/or Muonelo, if his skills are D1 ready this season, his points combined with the opportunities he will create for his teamates (a weak area for James and Obi) could get the team most of the way there.

Check out a highlight video:

When it comes to up-and-coming basketball talents, everyone likes to play the comparison game.... and I am no different. While I have seen comparisons made to Dennis Rodman; a sort of a high energy, do everything except score, rebound and defend kind of a guy....  I would say that Cobbins playing style, ability, and potential compares a little more closely to Lamar Odom. Similar size, versatility, quickness, some of the same moves, and they are both left-handed.. .although he admittedly does not possess Odom's natural scoring ability, yet.  Let's also hope that Cobbins doesn't share Odom's flakiness and excessive sweating abilities.

One more video. This one is some highlights mixed in with an interview.  Watching this interview, you can see where the high basketball IQ complements come from as he comes off as a sharp dude.

One last thing about Michael Cobbins.. he loves being a Cowboy.  As was mentioned above, Cobbins was highly recruited last year and had scheduled out a bunch of visits to a bunch of different schools. Well, before these visits could even begin Cobbins came to the elite camp at Oklahoma State and was impressed by the facilities, the coaches, and the players. He quickly scheduled a follow up visit for Labor Day weekend 2009, and while he was in Stilly he went ahead and committed to Oklahoma State.  He hadn't even taken any of the other visits.  He got to Stilly, loved it, and decided he didn't want to waste his time visiting all those other campuses. I think we are going to like Michael Cobbins.