A new feature here at CRFF, upskirts (no wait, that was an old feature), the new feature is this gimmicky Trend Watch thing.  Basically this is just a look at what I am high on, and what is dropping in its Sam-likability.  It is the most original idea out there as long as you ignore every other trending and buy/hold/sell article that makes up 40% of the internet.

For this edition, let's take a look at the scattershot that is Oklahoma State basketball.

Marshall Moses, Matt Pilgrim, and Darrell Williams all getting close to the same number of minutes
It is time to give up the fantasy of this team riding Marshall Moses to a 9 win conference season.  Sure he was great against lesser teams that were playing him straight up, but now that the schedule has toughened, and everyone has figured out that he can't handle double teams, that run is over.  Meanwhile, Williams is starting to figure out his game and has found his touch from inside of 15 feet, bullying his way back into the starting lineup.  As for Matty-from-the-Natty... this may be controversial, but I really think Coach Ford needs to let him play through his mistakes.  The guy is just too physically gifted to have to play with the shadow of a benching hanging over him.  As he showed this past weekend (when due to foul issues Travis couldn't bench him), once Pilgrim settles into the flow of the game he is capable of regaining his form of a season ago.

Keiton Page reverting back to being a complimentary scorer
I don't hate Keiton, I really don't (I do), but I have been very skeptical of him as a primary option at this level. Which is why I am happy to see him start to defer to Brown, Olukemi, and the bigs while he waits for his opportunities. Keiton can shoot, there is no denying it, but running set plays for him and structuring an offense around someone who, frankly, can be marked pretty easily by the opponents best perimeter defender wasn't working well. Keiton is much more effective when he is stretching the defense for others to operate, and getting lost in defensive switching for some open looks.

The future of the women's team
I know we don't ever write about the women's team here, but I did want to mention that they are in great hands moving forward with super fresh(wo)men Vicky McIntyre, Tiffany Bias, Jenni Bryan, Carissa Crutchfield, Jazmyn Dorsett, and Kendra Suttles all seeing significant action. Let's put a face to a couple of these super-freshmen shall we.  Oh, I'll just grab pics of any two at random. Let's go with Tiffany Bias and Jazmyn Dorsett. 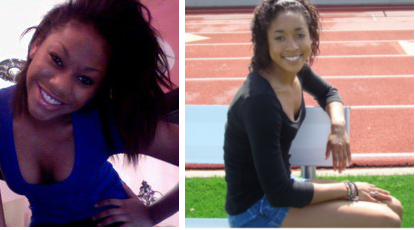 That is Jazmyn on the left, Tiffany on the right. Um... nice work on looking like that ladies. (h/t ostatejasper)

I hate to say it, but Jean-Paul Olukemi
The dude is fantastic, a super-talented wing, but he is not ready to have an offense rely on him yet. I think next year he will be, but for now this team may have to resign to the fact that there isn't a permanent go-to-scorer.  They have tried to assign the label to Page, then Moses, now JPO, but it may just be time to realize that the Cowboy's go-to-scorer is just whoever is playing well that particular game.

Perimeter defense
This has been trending down all season, but it is at it's lowest point right now. I'm not sure if it is a fear of fouling, slow feet, or just all around bad positioning, but I don't think we have a guard that can stay in front of any decent slasher. We could allow Brown, Penn, Page, and Sidorakis to swing a medieval-style mace and Diante Garrett would still take it to the paint without breaking a sweat.

Officiating
This has been brewing all season, but good lord what is happening out there?  A few weeks ago I wrote an article trying to objectively figure out why all the calls seem to go against the Pokes, but I am running out of ideas. I like to think of myself as somewhat reasonable in my fandom, as such, I am not someone that always thinks my team got hosed by the refs. (Proof: I am a Thunder partial season ticket holder and watch every game (I am a fan is what I'm saying), yet I will freely admit that Durant and Westbrook get a majority of the 50/50 calls in their favor.) So why is it that after every Cowboy game I feel like the officials just got their revenge for something an OSU coach, player, or fan did to their family?  I have to believe it is something to do with the style of defense, slow feet, etc, but I still haven't pinpointed the cause of all the fouls... so for now the officials will get the blame, and the trend down image (ouch).