Why has the Cowboy Basketball Team Been so Awful?

Share All sharing options for: Why has the Cowboy Basketball Team Been so Awful?

When I can't decide which angle to take on an article, I like to take it to the polls.  In this case, I think there might be 40 reasons this team is terrible, but here are my main ones:

So here is how this will work.  Rather than just voting for one issue, let's assign a value to each one.  How big of an impact (on a scale of 1 to 5) do you think each issue is having on this team.  Vote after the jump, and feel free to add your own theories in the comments.

Here are the average votes for each category. 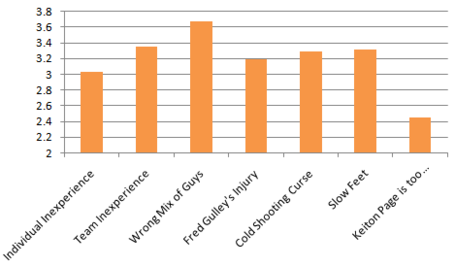 Here are the results with all the votes included.

My favorite thing about all of these results is that almost no one is on the fence about Keiton Page. Only one vote of a 3 for him being the problem, everyone else thought he was either definitely the problem, or definitely not the problem.  He may end up going down as the most divisive Oklahoma State athlete of all time.