Strength Through Adversity: Mike Gundy and His OSU Cowboys Show Their True Colors

Share All sharing options for: Strength Through Adversity: Mike Gundy and His OSU Cowboys Show Their True Colors

When Les Miles left Oklahoma State for Louisiana State in late 2004, OSU fans became depressed.  People around the Stillwater campus were simultaneously thinking: 'Will OSU ever have a coach that will plant winning seeds then stay around to watch them grow?'  The fan base had grown to love that kooky little ballcapped weirdo Les who had beat OU twice in a row and made bowl games a yearly occurrence, and O-State fans felt spurned.

But alas, ol’ Les could not be one of us.  He was a Michigan boy with dreams of coaching at a storied program and chewing grass at other, more established schools.  Miles’ fatal flaw in regards to OSU was his lack of VISION.  Even though T. Boone’s money had started circulating through the athletic department during the Miles era, Miles could not believe in late 2004 that OSU would have the facilities and player depth they now possess.
Today, we see that Miles’ departure was the best thing that could have happened to Oklahoma State football.   For in Miles' leaving, Mike Gundy received his "New York Yankee's job".

In a game that is transitive by nature, players coming and going through graduation and the NFL draft, failing coaches existing with a constant axe hanging over their livelihood, or successful coaches using programs as stepping stones to bigger programs, it is comforting for OSU fans to have a football coach who is both winning and sticking around to foster the program to new levels of greatness.

In his seventh year, Mike Gundy is Oklahoma State football.  And the Cowboy football team is Mike Gundy.
When OSU takes the field on Saturday, they are representing the brand that Gundy has built during a tenure that dates back to 1991 when he was OSU's wide receivers coach.  The Cowboys reflect Gundy's personality on the field by not shrinking like a violet against adversity as the Cowboy teams of old were apt to do.  This Cowboy team sees adversity, then makes whatever adjustments necessary to overcome it.

(Jump to see how the OSU Cowboys and Mike Gundy will be intertwined on the DKR field, Saturday)

As the Texas A&M Aggies and the OSU Cowboys went to their respective locker rooms at halftime during their Sept. 24th matchup, Gundy was asked how he would come back from his 20-3 deficit.  While most Cowboy fans watching were in "total-season-is-down-the-drain" mode after a half that had no defense or offense on the part of the OSU team, Gundy announced a need for adjustments in a very non-alarmist tone.  In the locker room, Gundy went around telling the team what had to be done, and how to do it.  From the DOK:

"I went around to each one of them and gave them my opinion of what happened, and they agreed. We talked about adversity. Your true colors are going to show when bad things happen."

If the first half of the A&M game was about bad things happening to the Cowboys, the second half was where the Pokes showed their (and Gundy's) true colors. OSU QB  Brandon Weeden started connecting in a day that would break the OSU pass completions in a game record. Receivers stepped up. And the defense held the Aggies to seven points the entire second half.  Even when bad things happened to OSU in the second half (namely Justin Blackmon's touchback fumble that would have never happened with proper ball security), the Cowboys did not let adversity beat them.  After Blackmon dropped the ball, the Cowboys went right back out on defense and got another turnover from A&M QB Ryan Tannehill.  Interceptions are hard for a coach to just dial up.  What a coach can do, though, is instill an ethic into the team to NEVER GIVE UP. And strength through adversity is what this team has shown every game this year including this 30-29 victory over Texas A&M.  Strength through adversity is what the Cowboys will show Saturday in the tough confines of Darrell K. Royal Stadium. 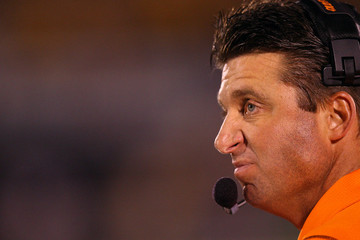 In a 2008 game vs. the Missouri Tigers, Coach Gundy made the defining sideline statement of his career by calmly and calculatingly drawing up offensive plays whilst SITTING on a equipment crate on the Faurot Field sideline.  Whilst Missouri scored a touchdown, fans from both teams couldn't help but watch Gundy passively look at the replay board then put his nose right back into the play he was drawing.  Gundy was looked at by some OSU fans as discounting the importance of the defensive side of football (and still is by some detractors), but Gundy's seeming passivity showed that he had a firm plan of action in place and that he had confidence in the Cowboys to go out and do what needed to be done.  And with QB leadership by Zac Robinson and a well timed interception (just like A&M), the Cowboys won that night in Columbia, 28-23.

Coach Gundy will not always be around to coach the Cowboys but he has achieved Cowboy immortality. He has done so by planting winning seeds in the culture of Cowboy football that were not around twenty years ago with Pat Jones or even seven years ago in Les Miles' tenure.  In the last two years, Gundy has made the "Poke-Choke" a thing of the past by teaching his team how to FINISH.  Gundy has been able to win close games because he has ingrained into the team that when things don't go as planned, you struggle and fight and ADJUST until the world remarks in unison: "How 'bout them Cowboys?"