Share All sharing options for: Picks From Joes Returns (Again)

Holy balls, what the hell happened last week? I'll tell you, I got so drunk I forgot to get drunk and make picks. How does that happen, especially to me? I'm not entirely sure how to apologize, but I've got an idea. This week I'm about 4 Red Bulls' deep, so I'm good to go, even with the booze.

By now y'all know the drill, it's 11 and I'm at the downstairs bar of Joes getting rowdy (one day a $6 pitcher will spill on my $2000 Mac and I will cry, then remember I have the extended warranty that covers liquids. Suck on that Steve Jobs **RIP**). Now then, this week everyone is in action, so we have 5 games to pick, as always in order from shittiest to bestest.

How the hell did this get on ESPN2? Really, if the Sooners don't score at least 70 they should disband the football program. We did it with backups playing from the second quarter on (and after Depth Chart, my Clint Chelf hard-on is raging). This will be a slaughter, and with KU fan support the way it is, there may be more Goon fans there than Jayhawks. I'm not even going to make an attempt at any analysis (you're welcome), instead I'm going to paste in my favorite Mangino picture. 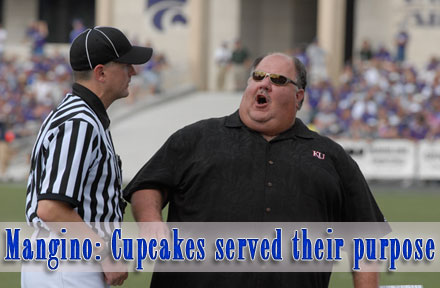 I'm having a hard time coming up with a number for this one, but I'm going to go with 85-10. You're on notice Stoopsie, time to really kick the shit outta somebody, A&M style, except worse.

The Cyclones visit the Tigers, and both teams are looking to get back to winning (duh). This game is homecoming for Missouri, which they claim to be the first in the nation. Well, first or not, ours kicks the shit out of Missouri's. Anyway, back to the game. Iowa State was looking strong early, getting to 3-0 before reality (and by reality I mean Texas) set in, and they have since dropped two straight. Missouri has struggled against every good team they've played, but this is their first home game against a decent opponent. Look we all love Steele Jantz, we all love Wide Right and Natty Light, but going on the road to Mizzou and coming home with a W will be a tall order for the 'Clones (and I know ISU fan's love tallboys, but this isn't the same thing). Look, we all know ol' Mizzou gives it up easy, has a prick of a head coach, a shitty fanbase, and an almost Aggie sense of self worth (yup, Aggie is a verb now), but none of that will help State (I just wanted to hate on Missouri some more). Missouri win's but not a big as they should, 28-24.

The Wildcats make the journey to Hades to battle the Red Raiders (lock those doors, KSU fans), in a game that should tell us more about where Kansas State is at. I'll concede, that Tech isn't very good this year (despite my thinking they would be, way to let me down Tubs), but winning in Lubbock is never guaranteed. This game can also tell us something about the Raiders, as Bill Snyder has too much pride to have his players fake injuries to slow the game down. If Tech can keep it close, or even win, this could be a season salvaging game. If they can't do either of those, perhaps their fans can at least take their bus vandalizing to another level. Here it is Tech fans, an open call to arms. I challenge you to not just place fish bate around inside the bus, I want to to crawl on top (because they'll lock the doors), open one of the vents on top, and take a shit. But don't just have one guy do it, make that fucker your personal porta-potty for the evening. Try and get at least 50 people to shit on the KSU bus. Or just light it on fire, West Virgina (by God) style. How the hell did I get so off topic? Wildcat's win, 35-28.

Those dance hating, DP loving (I'll let you decide which kind) Bears travel west to face off with those nut grabbing, girl hating Aggies. This "rivalry" needs a name, and the more I think about it the more I realize it's basically two cults facing off. Perhaps the Koresh Cup? I'm begging you, the loyal readers, to do better than that. Back to the game, what needs to go right for the Bears to win? Well, a few things, but firstly they need great play from RG3. Secondly, and perhaps more importantly, they need decent play from their defense. The difference between Tech winning and losing last week was two drives, where they almost held A&M to field goals, but surrendered long 3rd down conversions which led to Ag TD's. Also, the Baylor receivers need to watch out for cheap shots from A&M (just ask Eric Stephens about that), and the offense needs to prepare for Aggie "cramps". I'm sure they're well aware of that, it's almost as well known as the fact that Craig James killed 5 hookers (#rememberthe5). Do I think the 12th man will make a difference? Well, they'll be loud, but they're too busy paying attention to complex hand signals intended to signal cheers. Perhaps they'll give Baylor a horse laugh. Don't believe me? Think I'm making that one up? Nope, click this link, but for those too lazy to do that, enjoy this at your own peril:

[Pass Back: Hands with fingers straight are held palms together, and then hands move back and forth in a pointing motion]

Holy balls (a new official CRFF meme), that hurts me. I am embarrassed for those crazed bastards. On that note, A&M wins, 42-40

Once again, game of the week belongs to our beloved Cowboys, as they travel south to battle the Longhorn Network and Matthew McConaughey. I've been thinking, and I'd much rather be Boone's bitch than have anything to do with McConaughey. I believe the douche of the year awards were cancelled because he was a 12 time winner, and no one else on the ballet had a chance until he died. Now then, as for this weekend, while I have the utmost confidence in our boys to get it done, all Poke fans need to remember it's still Texas, and the game is still in Austin. I'm not saying we'll lose, but we shouldn't take the game for granted, we should celebrate a win tomorrow with the same vigor as we would a bedlam win. Need a reason to? Remember Vince Young in 2003 (and 2004)? Remember Colt McCoy in 2009? Remember Shipley (any Shipley)? FUCK ALL OF THEM! We need to kick the shit outta the horn's, if for nothing else just to prove last year wasn't a fluke (also, I wonder what would happen to the RRS if it alternated between Austin and Norman? How many gun fights and castrations would have to occur before they moved it back to Dallas?).

Now, while I'm not confident that either Ash or McCoy Jr will be able to do anything positive for UT, there's always a chance if we give them hope. I'm hoping Gundy goes for the throat, has us up early, and I hope Bill Young keeps the pressure on with a healthy does of blitzing. I think the Cowboys pull off the ass whipping, remind Texas rebuilding takes a few years, and put some fear in the Goon's, 45-14.

Now then, I was trying to figure out the best way to apologize for missing last week, but then I remembered this is CRFF, and I remembered that everyone here loves tits (don't click on the following link at work, around your kids, or your wife (unless she swings that way)). THIS LINK IS NOT SAFE FOR WORK, NOT SAFE FOR CHILDREN, AND NOT SAFE FOR DECENT HUMAN BEINGS. If you get in trouble don't say I didn't warn you.