Does Anyone Know How Good the Missouri Football Team Is?

Share All sharing options for: Does Anyone Know How Good the Missouri Football Team Is?

Does anyone know who this Missouri team is or isn't?  I have no feel for them, reading through Rock M Nation and other Mizzou sites offers barely anything concrete outside of "they could be good if they played an entire game like they did these small segments here, here, and here".  Even Pinkle himself peppers his pressers with lines like:

"I like to think they [are settling in] but every week is going to be a test. My big thing is, and I tell my team this all the time, in order to win you are going to have to play well. That doesn't mean you are going to win either. But playing your 'A-Game,' your best is the only shot you have."

Every word that I can find written about Missouri falls somewhere into doubt, uncertainty, "if this happens", or confusion. There is very little outright negativity, and very little reckless positivity, but every possible space in the middle is touched by opinion on Mizzou. What all this says to me is that nobody, not even Gary Pinkle himself, knows who this team is, or how good or bad they have the potential to be.

The short answer to what Missouri is, is inconsistent (duh). Depending on which game you watched them you may think they are good, great, terrible, or the concencus around here which seems to be, "the biggest obstacle to OSU getting to Bedlam with zero losses". And if the later is your opinion, then this guy would like to have a polite word with you: 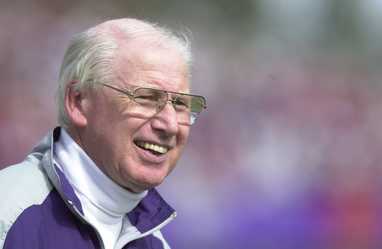 Mizzou isn't necessarily young, although they have up to 10 freshmen that see the field with some regularity, but they play like a young team. With 17 retuning starters from last years squad it was assumed that Missouri was one of the more well known commodities in the conference, but as was detailed above, they are anything but "known".

Really, this question of defining how good Missouri is all varies from week to week and quarter to quarter. We have seen stretches of great play from the Tigers for half of the season, and sketchy play for the rest, the problem is that those stretches of play have not been continuous. They came out and let Oklahoma know that they would have a game on their hands, then midway through the 2nd quarter started giving it away before ultimately making the final score interesting with the last 2 drives. They played like hell for almost 3 quarters versus ASU before putting together what was probably their best overall quarter of the season to finish that game (final score aside).  They laid an egg for most of the KSU game, then came back and throttled ISU start to finish.

So which Mizzou will we see on Saturday? Most likely a blend where short stretches make us nervous that maybe Mizzou can pull off the upset, and others where it looks like they dont belong on the same field. When a coach barely knows how good or bad his own team can be, it is all but impossible for an opposing fanbase to have a feel for what to expect going in, and I think that is what is the most worrisome about this game. There is a big "what if" sitting out there that has us all concerned that maybe Missouri can play for 4 quarters like they did for 1 and a half quarters versus OU and ASU. Even if they do, this Cowboy team has the horses to take them down, but that "potential" is what has most thinking this will be our biggest test before bedlam, and you can be certain that there is a 90/80 chance that concern has a 70% chance of becoming reality.

What do you think?  Which Mizzou are you expecting to see this week?  Or does it even matter if the Pokes play like they should?