Share All sharing options for: Can Less Practice Make Perfect?

As the lead Mike Gundy cheerleader, apologist, and interpretive dance analyst here at CRFF, Yachoff needs to talk about a surprising story coming over the AP wire about M.G.'s use of practice time.  Or lack of use.  You see, college football programs are allowed 4 hours a day or 20 hours per week to practice in. But it seems Gundy never schedules a practice over 1hr and 40min to save legs and reduce player "burnout".

"We're nowhere near the 4-hour rule. We don't ever get near 4 hours, or 20 hours a week".  Gundy then said about the fatigue that gradually infiltrate the psyches of players:  "If you've ever had a job where when you got up, you were dreading getting to the office because of the boss or your environment or you didn't like it, it's not very fun. Your production level's going to go down, I don't care who you are."

And since the 2009 season when Gundy implemented this 'save your legs for the game' strategy, the Cowboys have gone 26-6, not too shabby for practicing a fraction of the allotted NCAA time.

(JUMP TO READ MORE ABOUT M.G.'s LAX PRACTICE SCHEDULE, OR DON'T, ITS TOTALLY UP TO YOU)

But is this strategy really a good idea?  Can these student athletes really be properly conditioned for the big games if they are leaving practice before some teams are finished with warm-ups?  Crampfest '11 (also known as the A&M game) illustrated that Mike Gundy's Cowboys were a lot better conditioned than some opposition, with A&M players slowing the frantic pace of the Cowboys in the second half with their unending charlie horses.  Royal summed this all up well weeks ago.  Perhaps A&M coach Mike Sherman is a long practice guy, and the Aggie legs just weren't as fresh.

While Coach at Michigan, Rich Rodriguez's eventual undoing was being ratted out by his own players to the NCAA because he was practicing them too much in the off-season.  When players hate their coach and their practices enough to narc their program out to the fuzz, you think those same players are giving 110% on the field?  It is no coincidence that Michigan sucked hind tit while Rodreguez was at the helm, and that he was fired.

So the fact that even while M.G. shortens practices to keep the endurance levels up for the game and makes his practices fun with what the AP story term "humorous skits", it seems to be working in the win column and in the BCS computers.  Winning always satisfies even the most old school, 'teams should practice till they puke, then practice some more' football fan.  And we here at CRFF hope that these "humorous skits" involve someone, possibly Todd Monken, cracking open a monstrous Red Bull, putting a mop on his head and doing his best "Dana Holgorsen sings the hits of Phil Collins in a highly profane manner": 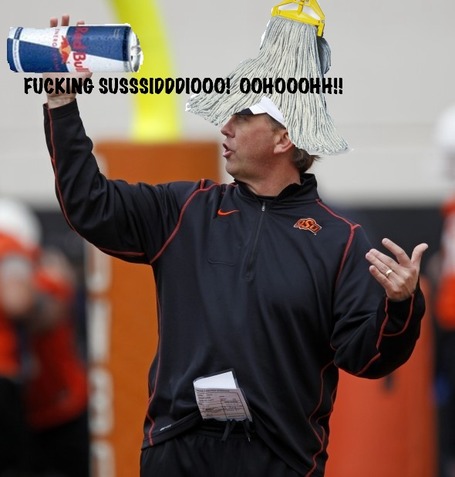