Former OSU HC Pat Jones Would Like A Moment Of Your Time...

Share All sharing options for: Former OSU HC Pat Jones Would Like A Moment Of Your Time... 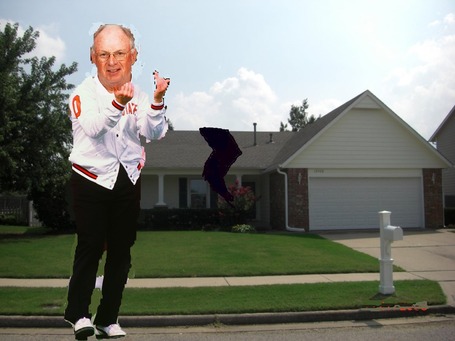 ‘Is the foundation of your faith in your OSU Cowboys shaken, by and large, because an unsteady former coach is berating your team at every turn?

‘Do my predictions of losses by your BCS burning Cowboys to teams who are three-and-three make you unsure of your OSU alliances and whatnot?

‘Does it depress you that Barry Sanders’ and Thurman Thomas’ former coach is now working as the OU media’s most unlikely mouthpiece?

‘Does wearing ORANGE on T.V. while I badmouth STATE on the radio strike you as slightly hypocritical?

'Was I correct in telling Tulsa World sports columnist Dave Sittler that, by and large, ‘Those OU coaches don't give a rat's-ass what OSU is doing' last week?

(Barry Switzer, off-screen):  "Jones!  Did you wash the crud outta the Boz’s jock like I fucking told you to?" 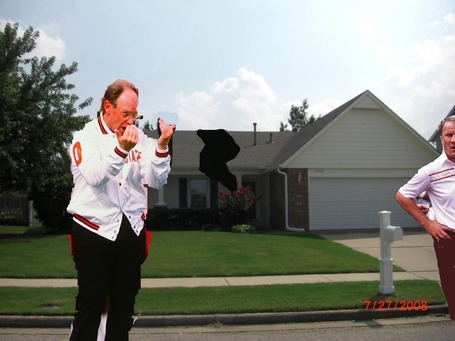 (Switzer):  "--Once I tell you to do something Jones, you bald headed runt, I expect you to fucking do it!  Now make yourself useful for once and get out to the Barry Switzer Center so you can scrub the pee outta the sidewalk."

"Coach, while me and my OSU friends are talking, would you like to weigh in on how it is, by and large, I am able to smile and hawk things like foundation repair and whatnot to these good folks under the guise of being the Eddie Sutton of OSU Football when I’m really somewhere between Bob Simmons and Jim Stanley, while, on the same hand, having time to berate OSU football to the local media at every turn?"

(Switzer): "Because you’re a goddamned good liar.  And a traitor.  Better than Charlie Thompson, and he was the best.  That’s why we keep you around, Patty."

(Switzer, facetiously): "It’s a term of affection, Patty.  There is that other reason we keep you around..." 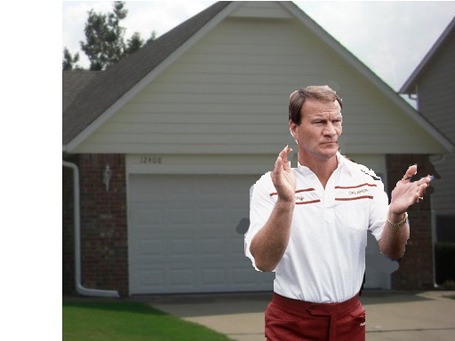 (Switzer): "Hey, assholes!  Listen up!  You think Patty over there gives a shit about you or your Pokes?!  Are you hurt by his betrayal because you associate Pat Jones with your celebrated 1980’s teams?  Did you buy the extra-deluxe-OSU-foundation-repair package for your home just because of these misguided predilections?...

‘Put it to you this way; having Pat Jones talk shit on your football program isn’t necessarily a bad thing...

‘Let me ask you this; you think "letter-jacket" over there even knows dick about football in the first place?  He never beat me, and I was stoned on coke to the gills in '88.": 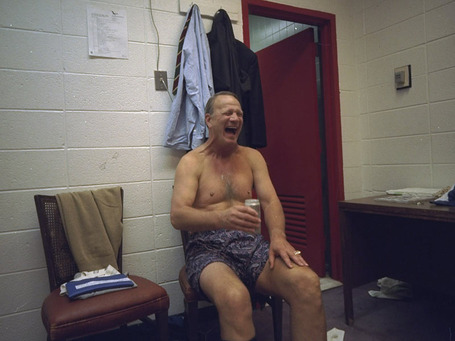 Not Out of Control

(Switzer, with a violent rage only SWITZER could produce): "You will call me COACH!"

(Switzer tries to give Jones a swift doe-pop to the forehead with his 1985 Orange Bowl ring, but Jones, ever the self-protectionist, wields a foundation appraiser’s level unto Switzer’s immaculate hairline, bringing forth gore)

(Jones, incredulous from finally vanquishing his former foe): "Coach, are you alright!?" 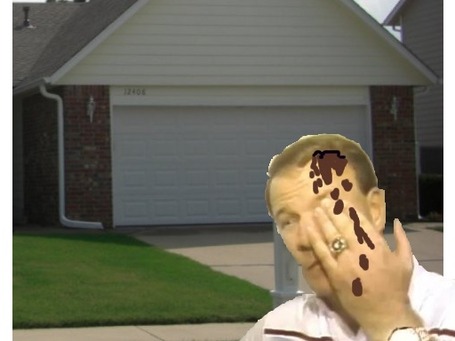 (Jones):  Coach, you are right-on-the-money as always.  Thank you for letting my friends here, by and large, know the truth about me, part of the very foundation of their undefeated Cowboy football team.  They couldn’t have done it without me.