Share All sharing options for: 2011 Oklahoma State Basketball Preview, Part 1 | Who we lost, retained, and gained

I remember back when I was in sports-blogging school.. I was in Mr Bloggins "How to Gain Traffic" class, and his rule #2 for assuring that a post would receive a huge number of views (rule #1 was "titties, titties, titties") was, "When the football team from the school you cover is #3 in the BCS and controls their own path to the NC game for the first time in school history, make sure and write about basketball".... so here we are.

Believe it or not, we are only a couple weeks away from this bball season actually kicking off, and Travis Ford and the fellas have been hard at work for 2 weeks now getting ready for it. This is the first of an as-yet-undetermined number of posts that will preview the Cowboy basketball team. This one will be about the bros.  You know, the dudes that will be running and jumping and shooting and hopefully winning on the white maple over the next 6 months.

This season is a bit of an oddity in Stillwater.  Typically, Oklahoma State basketball has worked on a cycle. We graduate a group of nice players who had just completed a nice run, then the next two years or so are spent in a tweener stage where performance drops off a little as some juco transfers fill in the gaps while the younger guys gain experience (the Boggan teams, Mo Baker teams, etc).  Then after a few seasons the young-ins aren't so young and have now blossomed into a solid team that is playing back at a high level. Well, 2011 is bucking this trend.  This is the first season I can remember where OSU is losing a large number of veterans, gaining a bunch of young guys, and is expected to outperform the prior seaon's results.... and by a lot.

So what are we losing?  Statistically, a ton. 7 of the 12 players that saw significant playing time last season are gone, and with them a large chunk of the scoring, rebounding, fouling (oh, how I will miss Matt Pilgrim's fouls), etc. Here they are represented with a pretty picture to lessen the blow. 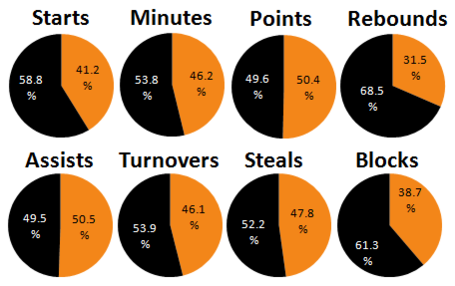 That is a lot of statistics walking out the door.

Who We Retained
Keiton Page - The under-under-under sized three point specialist returns for his 13th season in Stillwater.  Hopefully this season he can return to his role of contibutor, and away from his 2010-2011 role as creator.
Jean-Paul Olukemi -  JP returns after a fantastic, if bumpy, first season at OSU.  His physical talents are through the roof (as is the trend with this team now), he is one of the better slashers we have ever had, and he can do a bunch of little things very well.  His targeted areas of improvement from last year are consistency and outside shooting.
Markel Brown - Possibly the best overall talent on the team. Markell's game is... for lack of a better word... beautiful. He is smooth and controlled and posseses the entire skill set.  If he were a baseball player we would call him a 5-tool player. Where Markell needs to improve is in his decision making and on-ball defending.
Reger Dowell - Dowell and Gulley (and possibly Guererro) will be competing all season for time at that PG position.  Dowell brings a big-time slashing and scoring element to the position and is a fantastic drive-and-kick passer. He needs to improve on running the offense in a half-court set, and on-ball defending.
Fred Gulley - The oft-injured Gulley will make a go of it again.  Gulley is the best passer on the team, but his liability as an unreliable scoring threat allows defenses to sag off him and clog the lane.

Who We Redshirted
These are the names we heard a lot about last season, but never got to see play as they retained their redshirt status all year.

Michael Cobbins - Marshall Moses compared him to the Morris Twins from Kansas. Cobbins game was ready last season, but his body needed to add about 30 pounds.  He is getting there.  He is listed at 220 and I talked to someone that saw him a couple months ago who said that he looked much bigger than last year.  Hopefully he can gain the size to play All-Big12 level ball, because he definitely has the ability.
Brian Williams - Was also considered game ready last season, but was redshirted to gain experience and to "ground" him a little. All reports out of practice were that Williams could have possibly been starting last season had he been in the lineup, but with the nice talent already at the 2 (Page, Brown, Sidorakis), Ford thought it best to give him a year to gear up for this season. This guy could be a badass.

Who We Gained
Here is the quick list.  I will write more about these guys in a separate post since this one is already super lengthy and I wanted to write the most about these new guys.

There is a lot to be excited, and apprehensive about in Stillwater this season. With the next preview comes the fun part, mixing and matching together a bunch of amazing 5-man lineups out of all this talent.