If you missed the beginning of Part 1 of this preview where I ran out of energy after 1500 words and didn't finish the section about the new guys, check it out here. on to the new guys.

Who We Gained
This section will detail the 5 new guys that were not on the roster in any way last season.

Le'Bryan Nash - G/F, 6'7", 230
Let's start with the big one. By now you have all at least heard of Nash, aka: The biggest recruit in history, aka: The savior, aka: The guy that committed by doing this: 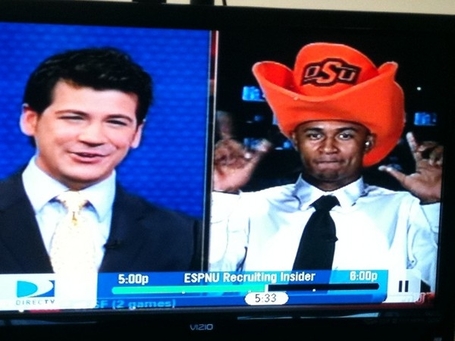 If you are unaware of his rap sheet, Le'Bryan was a monster recruit (Scout #5, Rivals #4, ESPN #12) out of Dallas, and is thought of by many of the services to be the most physically ready-to-play Freshmen in the nation. In a way, his advanced build made it kinda hard to scout him in high school because physically he was like a man among boys.

At his size, it is thought that he will be a 3/4 hybrid with most of his time spent at the 4, but as an NBA prospect he is definitely a small forward, so there may be some extra push to play him there to showcase his finesse game a little more. However, Nash's greatest asset is his power game. He is an explosive slasher, can play with his back to the basket, and can finish as is evidenced by his winning the McDonalds All American Slam Dunk Contest. He has a nice mid-range shot, and enough of an outside shot that defenders will be punished if they sag off him. And if all that wasn't enough, he is considered to have some amazing court vision and is an excellent passer to the point that the other players and coaches have made it a point to mention this as possibly the strongest part of his game. Oh wait, he also is able to lock down about anyone on the defensive end, and can rotate and create havoc with blocked shots thanks to that quick leap of his.

So where is the drawback?  Well that is the big question.  There really isn't much you can find wrong in his game, but.... you can't read any article about Nash without some mention of his attitude issues coming up.  He is known to start slumping his shoulders and disappearing in games when things stop going his way. Nash discusses it quite a bit in his interview with the O'Colly. Truly, who knows.  It isn't unusual at all for uber-talented high school kids who have been told how great they are since they were 10 to have a chip on their shoulder, and Nash admits that he is no different. To me, he seems a lot like a kid that needs some interview coaching and to be challenged on the court, both of which will happen at Oklahoma State. This "attitude issue", if it exists, will just be something to keep an eye on as the season progresses. At any rate, we all need to give him a chance and go into this expecting to see something great... because odds are we will.

Cezar Gurrero - G, 6'0", 175
The other top 100 recruit who was a huge get for Ford as he was one of the last top recruits left at the time of his signing, so he was pretty much being approached by everyone that had scholarships left. Guerrero is a showman who will dazzle crowds at GIA with his superhuman handles and incredible shooting. I'm not real big on AAU highlight reels, but if you want to see some of Cezar's domination, check out the list of videos here.

Guerrero says he is a true PG who likes to get his teamates involved, and while that may be true in theory, he really is a score-first point who has some nice drive-and-kick skills and can run a fast break as well as anyone at this level.  As is the case with most extremely talented HS players, their team depends on them to score half their points for them if they are to have any chance of winning.  While this works out great for any other position, at PG it can lead to some slow development in learning how to orchestrate an offense at the college level.  And unless Guerrero is a prodigy (which he may be), we should be in for a standard PG learning curve as he fumbles his way through his first season at Oklahoma State. Plenty of moments of greatness mixed with glaring mistakes.

While Guerrero could be the future of Oklahoma State basketball, I am betting that Dowell and Gulley are still the present of the PG position. But Cezar will see the court, and he will show us why he is so highly thought of.

Philip Jurick - C, 6'11", 270
The JuCo transfer who put up one of the most amazing season stat lines of all time with Chattanooga State last year. He averaged 10.5 points, 12.6 rebounds, and 9.5 blocks per game. What? He will bring some much needed muscle to the paint for the Cowboys who find themselves needing to replace everyone who played the 4 or 5 last season. Jurick is basically an enforcer on the defensive end, but he isn't a liability with the ball as he has a decent post game and gets a lot of his points on putbacks.  Think of him as a slightly more athletic Kendrick Perkins.

Jurick can be a bit of a plodder, sometimes walking through possession, but he makes up for it with good basketball instincts and physicality.  While Nash will get all the pub, and Cezar will be a fan favorite off the bench, Jurick might be the most important addition for the Cowboys as he will be depended upon to replace probably 70% of the things Moses, Pilgrim, D Williams, Shaw, and Franklin did last season. With this years team planning to operate at a much faster pace than last year, Jurick won't have to replace everything those post players from last year did, but he will be the main presence for the Cowboys down low.

Marek Soucek - F/C, 7'0", 230
The Czech import who fills the Euro void that has been missing since the departure of Fred Jonzen.  Soucek embodies every stereotype of a Euro-baller. He is 7 feet tall, but loves to play outside, he has completely sound fundamentals, is an excellent passer, and has some unique and effective post moves that lead to easy buckets.  Where Soucek differs from the stereotype is he brings a somewhat physical presence to the interior, he is comfortable with his back to the basket, and is not afraid of contact.

At this point it is hard to know if Soucek is a project or will be seeing action right out of the gate, but with Jurick being the only other true size on the roster I have to think that Soucek will be needed whether he is ready or not.  One thing is certain, we definitely need a good nickname for him, and I want to start off the recommendations with "Marek-ulous" and "Czech-ers".

Christien Sager - G, 6'3", 200
Sager is a walk-on from Wichita Falls who is attending OSU on a full academic scholarship, and will go ahead and play basketball, and maybe baseball, while he is here.  No big deal.  It is kinda tough to find out much about him, but what I have found suggests that he is a nice shooter who doesn't do much else well enough to get much playing time at this level.  However, guys like Sidorakis got their start this way to we will have to keep an eye on Sager and see what he can do.