Snap yo, we have a special edition of Picks this week, and instead of coming to you from Joes (which was packed as a whorehouse on payday) we're bringing you Picks live from Walkaround. Now, its currently about 2:15 am and I'm drunk as shit, so bear with me (get it?). Oh, and for you Mizzou fans, our homecoming beats the crap out of your homecoming, sorta like our football team. 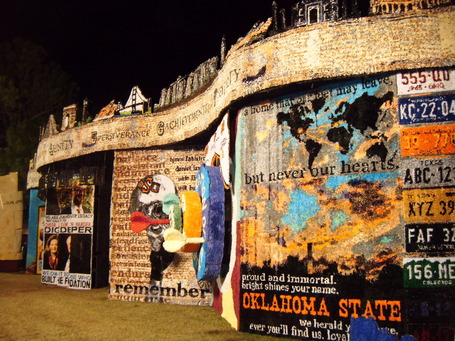 Hey, it's the debut of Big 12 football on the Longhorn network. Fuck yes, this marks the beginning of a dynasty, soon the LHN will overtake ESPN as far as total viewers. Only, there's a small problem. Not really worth mentioning, but you see, the problem is about 97% of those viewers can't actually see the God damn thing. Why is that? Is that proof that most people (read, not Texans) think Texas sucks the big one? Hell yes it is, Texas is the reason Al Qaeda exists. Ever seen Texas Women? A List Dallas? Big Rich Texas? Me neither, but from watching the promos it's basically a bunch of Texas whores slutting around Dallas on dick patrol, and a few douche's living off daddy's money. You know, the assholes at bars we all hate. That's no stereotype, that's pretty much how everyone in the Lone Star State is (except below the poverty line). Oh, and Texas will probably win, handily (not by as much as we did, but by more than OU did. They're big into moral victories in Austin this year). 42-10. Why so low? I don't think the UT offense could score 50 on the kids from The Ringer, and while Kansas is a little worse than that, they'll still keep em under the big 5-0.

Let's jump and see where the liquor takes us...

I'm torn on this game. Being a secondary Auburn fan, I love me some Tubberville (and anyone who embarrasses the goon's is legit in my book), but Wide Right and Natty Light is more legit (shameless promo quota met). When I think Tech I think syphilis and tortillas, (I like one of those), and when I think Iowa State I fondly remember Oklahoma State pre-Boone. Seriously Tech, wear a condom. Just cause the blow job only costs $5 doesn't mean its a good deal. And, while I love me some WRNL, Cyclone fans, why the hell are you wasting the name Steele "Fucking" Jantz? You should be undefeated right now with a name like that. What's that? You don't have an aging alumni who made billions and decided to make your team decent? Well tough shit, get your act together, make a bowl, and drink some tallboys. Hell, this is a good week to do it, Tech is riding high as hell off shrooms, HIV medicine side effects, and that win over OU. Smack those mask wearing bastards (but please, wear a glove) back down to reality, and only lose by 5 or 6. Pfizer's number one clients win, 33-28.

I've just spent 10 minutes trying to incorporate "two lame duck schools" into a joke. I've failed. And I don't care. Fuck em both I say. According to both Texags and Tigerboard the refs of the Big 12 have been calling games against these two traitorous slutpigs. Please, I can't get the lucky. Really, it's not fair for fans of schools in left in the Big 12 to be upset at these two for leaving. We're getting lucky, and the two worst fan bases in the league are leaving. It's a shame that Mizzou couldn't get the Big 10 to realize their obvious greatness, because their fans are some Ohio State type asshats. And the Ag's will fit in great with Arkansas and Mississippi. What's a little bestiality compared to incest? At this point I guess as an Poke fan I should want the Ag's to win, just to make that win look better. To hell with the both of em, ask Bama to be gentle when the time comes (we both know they won't, but at least you'll be more like the little bitches you actually are by asking). I'm not even gonna pick this game, I can't in good conscious pull for either of em.

8-0. Sounds pretty good doesn't it? Well to get there we gotta go dreadlock hunting. Until this year RG3 stayed about as healthy as Demarco Murray (who, after reading that, would get angry, and in doing so strain his calf and miss 3-5 weeks), so I think a few good shot should keep his shit down for good. Every time he get's hit I think he's done, but then 17 seconds later he creeps up off the turf. I'm sure Art Briles knows he's in trouble tomorrow, if he took time off guessing mens weights to actually watch game film. I wanna hate on Baylor hard, but I just can't. No, it's not because I'm worried about going to hell (I think thats a given at this point), it's that I like Dr. Pepper. I'm sorry, but those 23 flavors are so good, especially with some rum (Bebe's kids wouldn't know about that). Raise your Limeys and skylabs and toast to a Poke W tomorrow, big time; 55-24 (oh yeah bitches, we be coverin again this week)

Two things surprise me about this game. The first is that Kansas State is undefeated with old man rivers at the helm. The second is that Travis Lewis still has that fucking porpoise carved into his skull. I'm sure you've all seen it. When I first saw the pics my first thoughts were "What in the blue hell is that? Is that fucking flipper? How old are you Lewis? God damn son, grow some fucking self respect." First, you never give yourself a nickname, ever. That's the single lamest thing on the earth. Well, that's actually the second lamest thing, the lamest thing is creating a hand signal to go along with your stupid fucking nickname. And if you're gonna make up hand signals, don't make them stupid. If, while giving said signal, you look like Bobby Boucher trying to give a high five, you look like a dumbass. But, all of that would have been excusable if they kept on winning, but thanks to Tech getting their Captain Quinn on, all the "sharks" just look like douchebags. Well, bigger douchebags. I have heard the sports animal tell me all week how this game will go. OU's mad they say. OU's gonna come out fired up they say. Well I say they'll lose. KSU gets up every week (I hear Viagra helps Bobby), and Snyder knows exactly what he will get outta his team. I don't think Big Game has a clue what the hell he'll get from his squad. So go ahead and carve fish in your heads, bump "fins", and enjoy dropping a second straight game. Wildcats eat the fish, 28-17.