Sorry everybody, won't make it to Joes today, I'm in Big D (and I do mean Dallas) for a job interview. Ponder this for a moment, if I'm hired one day I will actually build bridges that people will drive on. Anyhow, I'm gonna be (mostly) sober for this one, and relatively short.

Our friends over at WRNL should be pumped, they have a guaranteed W this weekend. This game isn't even worth picking, Tulsa Union would  put up a better fight than the Jayhawks. What does Kansas do well? Nothing. Not a damn thing. Now then, since that business is over with the only thing left to do is to decide how many beers the WRNL crew will consume, and then have the CRFF nation consume more. I'm guessing they'll go an 18 pack a piece, so I need everyone here do down a fifth and then a 12 pack. No way they beat that. Oh, and the 'Clones win 42-10.

RG3 will be out for blood, but that's about as scary as having Paris Hilton after you. I guess the worst thing he can do is bitch you to death. Baylor is on it's way to being exposed as Baylor, and I think ol' Mizzou will continue the trend. The Baylor defense gave up 5 touchdown drives under 60 seconds last week, so to say they are susceptible to the big play is an understatement. James Franklin should get rowdy, RG3 will get pissy, and the Tigers smack the Bears around like a street hooker who didn't have daddy's money; Mizzou wins 45-21.

Two weeks after one of the biggest wins in Tech history, and one week after one of the biggest loses in Tech history, the Red Raiders travel to Austin to try and get back on track against the Longhorns. Speaking of the Longhorns, after the beatdown they gave Kansas it seems like they are starting to play some decent ball (though, I think I've felt that way about 4 times this years, so they still probably sucks). I think Tech has the ability to score on the Texas D, especially if they come out like they did against OU, but I don't think they will. I'm worried about the mental state of the Raiders after last week, and I think the Horn's will capitalize on it, winning 35-28.

The goon's will be looking for revenge after last year, the Aggies are reeling, and all I have to post is this. 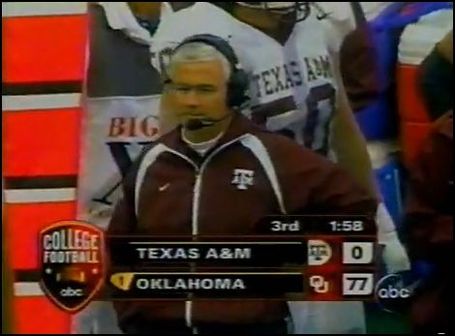 The Wildcats make the journey to God's country a week after OU beat the crap out of them in Manhattan. Your beloved Cowboys are coming off a Baylor rape and murder, and look to continue their winning ways. What do the Wildcat's have to do to win? We'll I'd say control the clock, but so far this year that hasn't helped anyone. I'd say stop the pass, but everyone has tried an no one has succeeded. Really, defensively there's nothing they can do, and on offense they can't pass really well, and I don't see much hope for them. Snyder's doing good things, will get them back near the top of the league in a few years, but this year this Cowboy team is too good, Pokes win 55-20