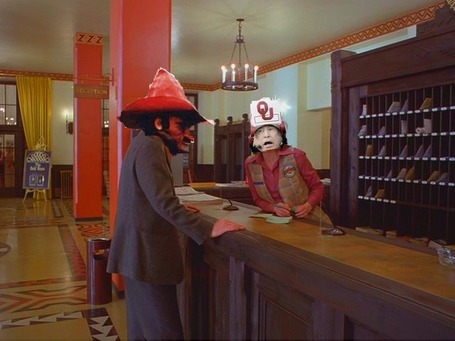 Lee Corso: "Welcome! Will you be checking in?"

Pistol Pete:  "No.  I’m just going to check out the bar.  I’ve some business in early January and I won’t be staying long."

(Lee Corso leads Pistol Pete to a smoky, poorly lit, converted conference hall that serves as the hotel bar.  There are about 15 other mascots at the bar.  Some have the look of having been there awhile.  Pistol Pete sees some conference chums, but doesn’t want to have to talk to Raider Red, so he sits beside Willie Wildcat)

Willie Wildcat, quickly, desperately:  Pete! You made it.  Now listen, we don't have much time.  Whatever you do, do not order "the special". It is made of poison and roofies. You will never get-out-of-this-HELL---

(Blue Devil, who is tending bar, breaks in abruptly) 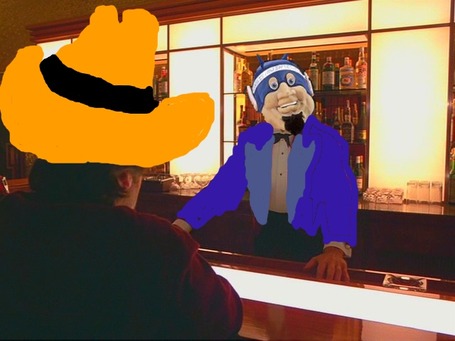 Blue Devil: --Willie, please be quiet.  You are disturbing our new guest.  Mr. Pete knows better than to listen to the nonsensical ramblings of a half-man, half-Mongrel, anyhow.  Mr. Pete has Justin Blackmon!  He is a man who knows what needs to be taken care of.  What’ll it be, Mr. Pete?

Blue Devil:  We just have Schlitz.  You sure you don’t want the special?  It’s really good...

Pistol Pete:  Schlitz sounds okay.  And a shot of ‘Jack’.

(Blue Devil pours drinks, but is eying his patrons carefully for signs of cracks.  New clientele doesn’t happen much, and it always brings forth tense times at the lodge.)

Pistol Pete:  What's with this place, Willie?  How come all the drinks are second rate and the walls are filled with photos of fans crying?

Willie Wildcat, again terse and nervous: --KEEP COOL.  Ill explain in the men's room once we get an opportunity--.... catches Blue Devil's watchful eye, That was some good game the other day, Pete.  You got some team there.  They don’t quit.  I think you’ve a good chance of escaping here...I mean, escaping without a loss this season... 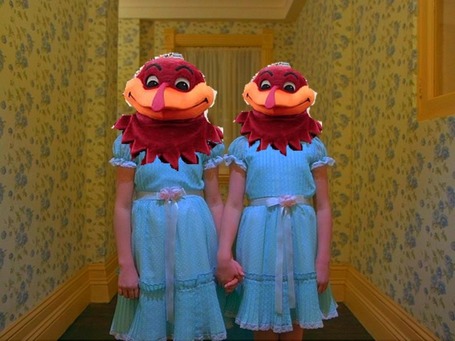 Blue Devil: So is this your first stay at the A.P. Lodge, Mr. Pete?

Pistol Pete:  Yep, just visiting for now.  Haven't even rented a room here yet.  From the looks of it, I'm seriously doubting if I will.

(Cackles from other mascots)

Bill The Goat, laugh bleating:  This place has a way of renting you... BAAAAAHAA BLEEEAT!

Blue Devil: QUIET! Well, I'm sure you'll find the accomodations to your liking.  My cousin Sparky the Sun Devil and his friend Gamecock can fill you in on the A.P.'s "amenities".  Sparky?

Sparky:  "THIS PLACE IS FUCKN AWESOME!  WE AINT GOTTA DO SHIT!  FREE SKINNAMAXX, POOL IN DA SUMMER, ALL THE BEAM WE CAN DRINK!"

Gamecock, strutting : OH YEAH,Y’ALL! BA’CAWK!  As soon as we figure a way to pipe some more cheerleaders in here, or keep the ones we have from aging, WE’LL BE ON SOME SERIOUS MONEY, Y’ALL! SQUAWK!

Bill the Goat: That’s because they are all dead. BAAA! BLEET! Some of them before you two fratboys even got here.   You know nothing of football.  The Naval Academy reached #2 three times! Roger Staubach! BAAHH, BAAAAHH!

Sparky, rearing his hand back:  SAY ‘ROGER STAUBACK’ ONE MORE TIME SHITHEAD. SEE WHAT HAPPENS.  NOBODY EVER HEARD OF HIS ASS.  HIS JOCK COULDN’T HOLD JEFF VAN RAPPHORST’S MINERALS!

Chief Illiniwek:  Hey. Your Jeff Van Rapphorst's and Roger Staubach's are just as the boar in the night, gone down to sleep with the dying weeds.  The moon will not rise on the sands of Tempe or Annapolis as long as there are stars in the sky.
Now, Mike Taliaferro.  There was a quarterback.

Sparky: WHO LET JAYHAWK OUT OF HIS CAGE?!! NOW THERE WILL BE SHIT EVERYWHERE!

(Groans from the regulars.  Pistol Pete scowls towards Willie Wildcat hoping for some kind of explanation)

Willie Wildcat:  When I give the signal, make a break towards the bathroom...  Go!

(Willie, still obviously scared of something, dashes towards the men's room.  Pistol Pete causally vacates his barstool and follows after him into the facilities.)

Willie Wildcat:  There you are.  Listen to me, Pete.  I know you think number two is good.  And it is, but it isn't the best.  Do you understand?

Willie Wildcat:  This lodge is filled with mascots who got to the edge of being the best then fell short, their dreams and the dreams of their fans dashed out of their heads with an axe blow of mediocrity.  Hell, Buzz from G.T. won the N.C. in '91 and they still won't let him out of here.  Now I fear the lodge wants you too.  Do you see the danger you are in?

Pistol Pete, now beginning to show some distress:  What do you mean, 'won't let him out of here?'  What kind of hotel is this?  I just picked it because I thought it was a 'Best Western'. 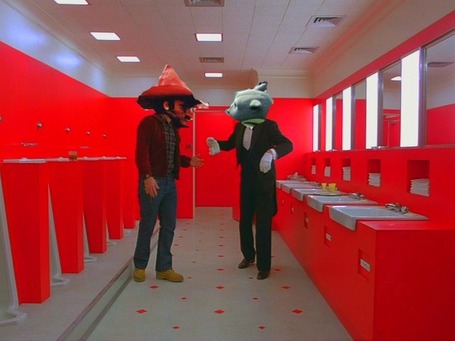 Willie Wildcat:  This is the lodge of broken dreams!  You can check out any time you like, but you can never leave!

Pistol Pete: I hate that song...  So, you're telling me that there is no way out, that I have to sit here and drink Schlitz forever with a bunch of failures as the reward for beating you last weekend?

Willie Wildcat:  There is one way out.  The only way is to win the Big Enchilada, Pete.  It's your only escape.  A.P. will have to rank you number one, and then you'll be free forever.  But, if you don't, you become one of us.

(Blue Devil storms in with Raider Red who is brandishing a large axe.  Raider Red then grabs up Willie and carts him out of the men's room.)

Raider Red:  I'll be back for you next, Cowpoke.  Then we can be together forever, and ever and ever...

Blue Devil:  I trust Willie has told you only a small portion of the reasons for our little arrangement here at the A.P. Lodge, Mr. Pete.  Let me fill you in... When I first came here in the beginning, I was the only patron of this establishment.  Over the years, we had a few mascots visit for awhile then leave, and fewer still that wanted to stay for any length of time.  It was hard for them to remain satisfied here.
Pistol Pete:  I can imagine.
Blue Devil: From 1959 to South Carolina's arrival in 1984 we had very few long term residents of the 'A.P. Lodge'.  The lodge fell on hard times.  We needed a way to get mascots in the door who were not apart of the college football establishment, but were quality mascots nonetheless.  So, the lodge devised the BCS computer rankings module.  The computer algorithm has allowed statistically proven non-establishment college football teams to breach the polls of a establishment-biased media.  Since we knew the A.P. Poll would not be able to argue with a computer, and that it would just follow with whatever rankings the BCS model put out, we had the perfect strategy for new blood here at the lodge.
Pistol Pete:  Then what happened?
Blue Devil:  The BCS Module worked too well.  We've had to allow non-BCS conference teams that have no real shot at ever obtaining #1.  Boise State, Utah, South Florida!  They've no business in a place as nice as this with their schedules!  WE FEATURE CINEMAX!

Pistol Pete:  I hate to dissapoint you too, Blue Devil, but I really am serious when I say I'll only be here until January 9th.  I'm not going to be able to be apart of this for you, unfortunately.

(Pistol Pete turns to walk out, but Blue Devil's words stop him)

Blue Devil:  But Pistol Pete, You've always been apart of the A.P. Lodge.

LIST OF TEAMS THAT PEAKED AT #2 IN THE ASSOCIATED PRESS POLL IN ORDER OF APPEARANCE, NUMBER OF SEASONS WITH AN APPEARANCE AT #2, AND LAST APPEARANCE, POST 1936: 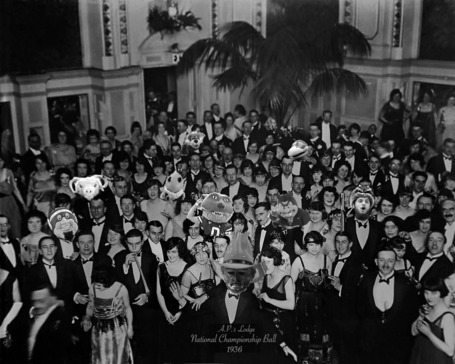 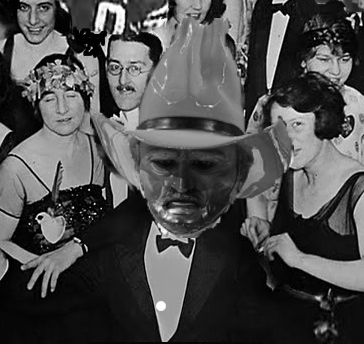 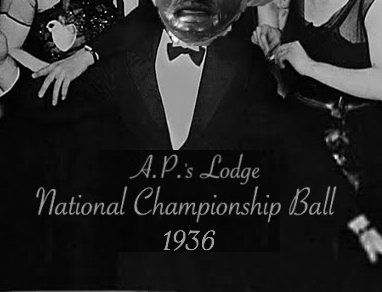