Bedlam brings out the worst in all of us. We yell, curse, fight, mailbomb, put sparklers into gas tanks, cut valve stems, and disown family members. OSU fans can be somewhat execrable when it comes to OU.

Here is just one reason that these squats chap our ass, espicially with the success of our team this year:

Some OU fans claim that they "root" for OSU during the season until bedlam, and then question why it is that OSU fans continually root against the Sooners. Well, theirs is a bullshit fallacy. Why should anyone root for their main rival? They feel as though we are rooting against the state of Oklahoma if we root against OU. This shows the conceited nature of the OU fan. They think that OU is every Oklahoman's collegiate representation of our state. But to us, bygod OSU is the only university that matters to us in this state. If we had our way, the Gooners could keep Oklahoma University, but it'd be in France.

For this and other reasons we hate, but hate alone will not help us transcend into better sports fans. We need graphical representations (unlike this awesome freedom of speech travesty, these are all SFW). We need modern art.

This is called "Pay for the Pizza": 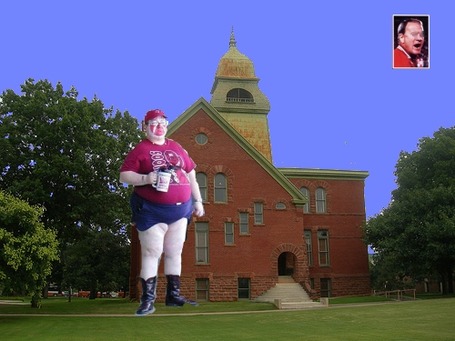 Interpretation by Artist: OSU's "Old Central" is the most iconic building at OSU. It is the original home of the Bedlam bell, and Frank "Pistol Pete" Eaton fired off some rounds inside accidentally, according to legend. It is rich with OSU tradition. But even here we cannot escape the scourge of the Sooner. The Sooner can take many forms, the brain dead, fashion challenged, fat, slovenly, goon clown, or the faceless loudmouth blowhard. Here we see a beloved institution under attack by the giant unwashed goon masses and omnipresent eye of the Switzer-Castiglione crime syndicate.

(In the JUMP, every Land Squat will be famous for fifteen minutes...) 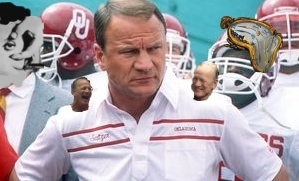 Interpretation by Artist: We can only hope that the one on the left tells him to give out hugs at the Special Olympics.

This is entitled: "The Worst Music Video 'The Cars' Ever Made" 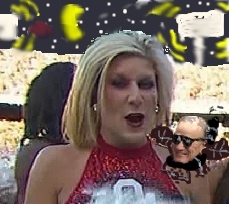 Interpretation by Artist: Not only did this cheerleader look like a dude, IT was always giving the camera this weird, unnatural, "Oh, you rascal" expression reminiscent of the model in the new wave band "The Cars'" music video "You Might Think". It took a surprisingly small amount of magic mushrooms for Yachoff to make this cerebration.

This is "4 Sooner Band Girls Crying": 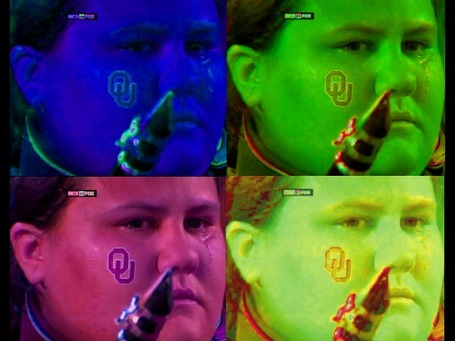 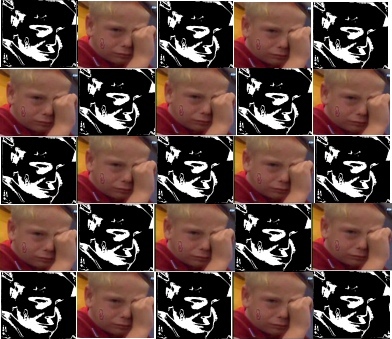 Interpretation by Artist: Warhol's use of repetition conjured the ability of infinite reproduction of simulacra in the new photography age. But here, Yachoff just likes to see fat OU girls and little OU punks cry over a football game.

Come Saturday night we will have more photos of crying Sooners to manipulate.