OSU In The Fiesta Bowl: Numericals

Share All sharing options for: OSU In The Fiesta Bowl: Numericals

OSU has been in the Fiesta Bowl before. But back then there was no such thing as a BCS, the Fiesta Bowl was still the Western Athletic Conference's lame attempt at a bowl season dancecard, and the sweet sounds of Jim Croce may or may not have been tearing up your radio. The OSU Cowboys of 1974 were 6-5 and led by future USFL championship coach Jim Stanley. Terry Miller's first year at running back saw ground heavy victories over Arkansas, Missouri, and Kansas; but losses to OU, Nebraska, Texas Tech, Colorado and..ahem..Baylor. Passing was not as heavily relied on in those days. QB Charlie Weatherbie was 42 of 113 passing for the year. By comparison, Brandon Weeden threw 47 completions this year in the Texas A&M game, alone. However, George Palmer, Miller and even Weatherbie himself got it done on the ground enough to warrant OSU's first bowl since the Bluegrass Bowl in 1958.

Ten years before Levell Edwards and the Cougars would win the national championship, the Edwards-led Brigham Young Cougars met these OSU Cowboys in the 1974 Fiesta Bowl, played on December 28th, 1974. The 1974 Cougars had succeeded in stealing a title from WAC stalwart Arizona State, and the Fiesta was their reward.

But BYU's ultimate reward that day was to be beaten. Not "thrashed" beaten, not decimated beaten, but beaten all the less. Defensive player of the game for the Cowboys, Philip Dokes put a hit on 1974's leading passer Gary Schide taking him out of the game early. Mark Giles was the backup morman to Schide, but proved to be less worthy of the love of the latter day saints. Whereas OSU was held to 137 yards of offense by BYU, the Cowboys nevertheless scored two touchdowns and a field goal to the rudderless BYU offense's two lone field goals. OSU won 16-6 to become the first Fiesta Bowl winner to not be Arizona State. 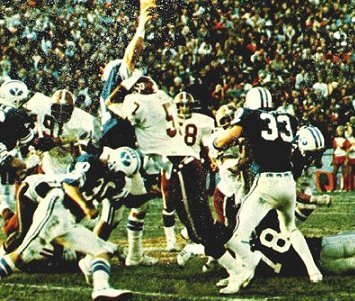 (Jump to view the all time OSU/Standford series record!)

There you have it. OSU's got Fiesta history on it's side. While Stanford has been slumming it in the Rose Bowl 12 times over the last 110 years, OSU's been busy participating in quality bowls like the Bluebonnet(Defunct), Bluegrass(Defunct), Independence, Alamo, and the sweet, sweet Insight. OSU is 61% in 21 bowls to Standford's 45% of 22 bowls if you count their tie in the 1926 Rose Bowl as a loss, and of course any tie should be counted as a loss. OSU wins it's bowls over half the time, and Stanford wins just under half. Suck on those numbers, Stanford.