Need a break from basketball?  Well you are in luck because the NFL Combine is starting up on February 24th and will run through March 1st.  The combine will take place in Indianapolis, and several former Cowboys will be among the participants. Kicker Dan Bailey, Defensive End Ugo Chinasa, Linebacker Orie Lemon, Cornerback Andrew McGee, and of course Running Back Kendall Hunter will be showcasing their talents for numerous scouts and evaluators of talent while being measured and judged at every step along the way. I hope to make my way through profiling all of them over the next day or two, but at the very least I will get the most prominent one done here today

Before evaluating how Kendall and the fellas may perform at the combine, we should know what the players will be going through in order to properly assess how they may fare.

The first thing to know is that every player goes through pretty much the same set of measurable drills, exams, phych evaluations, and interviews.  There are some position dependent evaluations obviously, like having the quarterbacks throw and the kickers kick, but a majority of what the players go through is the same for all.  The measurable drills are:

As we know, how an athlete performs in these combines can often carry as much weight as their playing career as this is one of the only times a scout is able to evaluate a players talent on its own, without teamates and opponents intervening. So how will former Cowboy' running back Kendall Hunter fare?

Kendall Hunter
Kendall's combine will start along with all the running backs on Feb 24th with most of the televised measured drills being run on Sunday the 27th. The combine is going to be important to Kendall's draft stock as he isn't as known of a commodity as Mark Ingram of Alabama or Mikel LeShoure of Illinois. Right now Kendall is projected as either the 4th or 5th RB taken (depending on what each service thinks of Daniel Thomas), and a 2nd round pick, but a good combine could push him up into the 1st round.  Fortunately, Kendall is a back that is built for the combine.  At 5'7, 200 lbs, Kendall is considered undersized, but as we know his between the tackles running ability, his power, and lower body strength are on the level of a much bigger back.  In addition, his shifty running style has showcased his incredible cutting ability and quickness, and he has impressive straightaway speed that should bode well in the speed tests.

40 Yard Dash - In spite of a consistent knock on Kendall being that he doesn't have great breakaway speed, he has logged nothing but great 40 times over his playing career. He has been timed anywhere between 4.38 and 4.58 which is impressive for a running back.  In the 2010 combine, the average 40 time was a 4.58 which is the absolute worst Kendall has ever been timed at, and we should expect him to time out somewhere around a 4.5. However, there are tons of examples of guys running their worst ever time in the combine so that can't be ruled out. 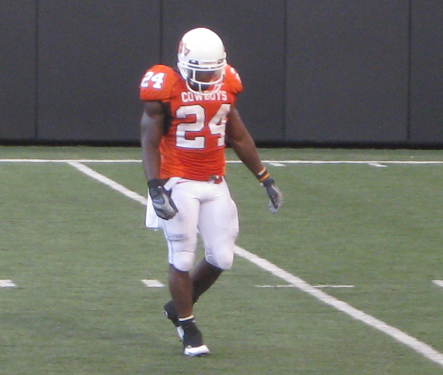 Those are some guns son! While the the muscles on display here aren't the chief muscles used in the bench press, you can bet that those delts, and pecs are just as ripped as the biceps and triceps you can see in that pic. Keep in mind, the combine version of the bench is as much of an endurance test as it is strength, and in this regard Kendall is set up to excel as well. We have all seen Kendall used as the workhorse, and know he has a serious motor. This season alone he had 9 games with over 20 carries and 5 games with over 25, and that doesn't even take into account his excellent job as a pass blocker, and the action he saw in the return game. Bottom line... it takes a lot to wear the guy out.  In 2010, the average number of 225 bench reps for Running Backs was 18.6, and Kendall should be expected to put up somewhere around 20.

Vertical Jump | Broad Jump - While Kendall has always been able to bounce off of and cut around defenders, and aspect of his running that we saw great improvement on in the 2010 season was his power running game. Check out the 0:38 mark of this video for proof:

In 2008 we just didn't see nearly as many impressive trucks, or Kendall pushing a pile like what we saw in 2010. And that is mostly due to leg strength, and legs are what people use to jump (is this patronizing?).  So by extension, I am going to assume Kendall measures well in the jumping events. For what it's worth, the average vertical for Running Backs in 2010 was 37", and the average broad jump was 9'8".

3-Cone Drill | Shuttle Run- Speed burst and cutting have been the hallmark of Kendall's game, so the drills that are intended to measure quick bursts, lateral speed, and cutting should bode well for him. I don't know that we need any more proof of this, but just for the hell of it, here you go:

I predict good things for Kendall here... we shall see.  I will be posting a recap of Kendall's combine performance at the end of the entire combine process.