Still dumbfounded by that loss to A&M?  Wanting to take a week or so off as a fan to get your head on straight and try to make sense of Reger Dowell's performance?  Too bad, get in the car, we are heading up I-35 to Lawrence to take on the Morris twins and the #1 ranked (for now) Kansas Jayhawks. There is one positive out of this though.... when your team has just lost a resume killing, tournament ousting type of game like the Cowboys did on Saturday, then you want to play a good team next to make up for it. Any scenario that called for the Pokes to make the tourney had them going 1-1 in the A&M and Kansas games, so that hope is still alive... it is just A LOT less likely that the @Kansas game will be the win.

So is there any reason to keep hope alive?  Well Pomeroy doesn't think so as he gives the Cowboys a 4% chance of winning this game and predicts an 82-62 Jayhawk win.  And Pomeroy is right...there is very little chance of Oklahoma State pulling this one out.  But just for the hell of it, let's break down what needs to happen for the Pokes to pull off the unthinkable.

So yes, the chance of all of these things working out in the Pokes favor is somewhere around 4%, but this is why we are fans, and why we follow our team.... because sometimes that 4% happens. There is nothing in sports that is more depressing than a defeated fanbase, so I say we take the "anything is possible" approach and look at this game as an opportunity instead of a guillotine.... even if it is just an opportunity to keep hope alive for another few hours before the Jayhawks bring the blade down on our season. 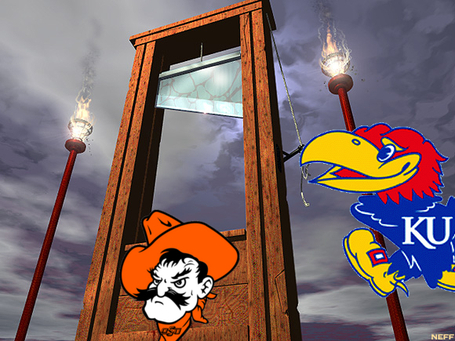 PLAY THE MARCH TO THE CHAMPIONSHIP GAME AND YOU COULD WIN A TRIP FOR TWO TO LAS VEGAS! LOOK FOR THE CODE INSIDE SPECIALLY-MARKED PACKAGES 12-PACKS OF BUD LIGHT ENTER CODE AT FACEBOOK.COM/BUDLIGHT No Purchase Necessary. Open to U.S. residents (except CA & TX) 21+. For a chance to win a Grand or First Prize, Game Period 1 begins 3PM CST on 2/14 & ends 3PM CDT on 3/18. For a chance to win a First Prize only, Game Period 2 begins 3:00:01PM CDT on 3/18 & ends 3PM CDT on 4/30. To participate, obtain a Code from inside specially-marked packages of Bud Light beer or to request a Code without purchase, visit budlight.com/freecode during a Game Period. Limit one (1) free Code request/day/person or email address. To play, text HOOPS to BEERS (23377) & follow prompts or visit budlight.com/freecode & follow instructions. See Official Rules inside package or at budlight.com/freecode for complete details. Void in CA, TX & where prohibited. Enjoy Responsibly – SEE COMPS FOR SPECIFIC FONT FOR THIS ©2011 Anheuser-Busch, Inc., Bud Light® Beer, St. Louis, MO