You know how it is.... you are sitting around, watching dvr'd games from this season, when you decide that you have to see how Oklahoma State shoots from different distances in conference games and put it into an image and a table.  Well I took this totally normal impulse and ran with it. Since I didn't have access to all the distances of every shot that has been taken (note to the bosses: that would be sweet), I had to apply some logic that could differentiate between layups, dunks, and three pointers, then I just counted everything else as a mid-range jumper. So it isn't as detailed as I would like, but it is still a nice representation of the sad state of shooting by the fellas in orange and black this conference season. 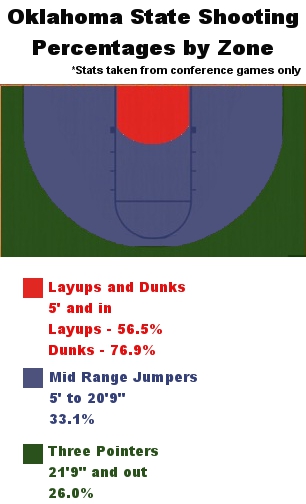 If I had to pick a favorite stat out of all those colors,I think my absolute favorite would be that the Cowboys complete 76.9% of their dunk attempts.  I didn't feel inspired enough to pull this same data for all teams to see where we rank (has to be dead last), but to give that stat a little perspective:

The game by game data for all categories is after the jump.  There are some landmark awful performances in there (4-27 on mid range jumpers at Texas!).