Nine games into the conference season, and starting to make things interesting, we now have a large enough sample size to start looking for trends that relate specific stats to wins/losses, however thinly. Sure, some of this can fall into the "correlation does not imply causation" category, some may be arbitrary, and some of it may just be flat out coincidental.  But still, it's always fun (this is fun!) to look at what a team is doing when it wins, and what it is (or isn't) doing when it loses.

First up, one that we probably already assumed, but now with proof. 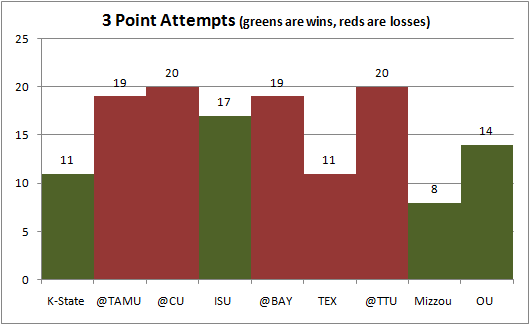 Seeing that, the thing I wonder is: why doesn't every team play that Baylor zone against the Cowboys?  Make the Pokes shoot from outside.  Except for the Texas game, and kinda the Iowa State game, this stat has held.  I know that a team can't just change their entire defensive strategy because Oklahoma State can't hit threes, but I would think we would at least see teams play a man that is mostly packed inside... which btw, is exactly what Nebraska (OSU's next opponent) does.

The second one is about what I would expect, but with a twist: 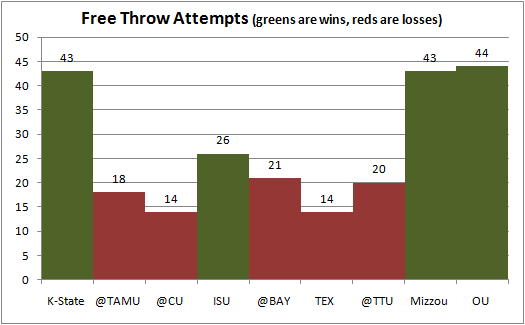 Obviously, getting to the line is a big deal.  This is somewhat indicative of the way the games are being officiated, but I think more it is a result of our offense forcing the issue. In a way, this stat is tied with the three point shooting one above.... the Cowboys aren't a great jump shooting team, hell they aren't even a below average jump shooting team, so when they are taking it to the rim instead of settling, they score, they get to the line, and they get the other team in foul trouble... all good things.  Now the twist with that is this: 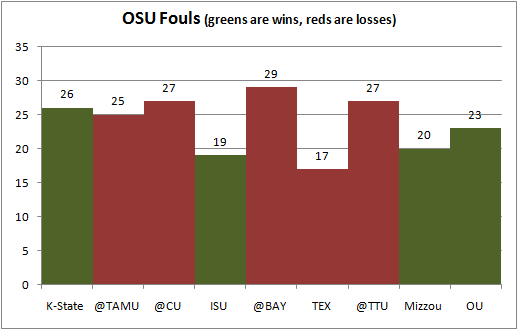 What is interesting here is that the officiating isn't that much of a determining factor in the Cowboys wins and losses. The number of fouls the Cowboys are whistled for varies slightly between the wins and losses (22/game in wins, 25/game in losses), but the separation isn't nearly as strong as it is on the number of free throws the Pokes attempt.  So in theory, the Cowboys can foul as much as they want, as long as they are getting the calls on the other end as well.

One more.  This one isn't as clear cut as the first few, so I'll explain it first. Basically, this is the shot differential between the player that took the most shots, and the player that took the second most shots. What I am trying to prove is that if one guy is taking a lot more shots than anyone else, OSU isn't as good of a team.  The leading shot taker is listed in the bar. 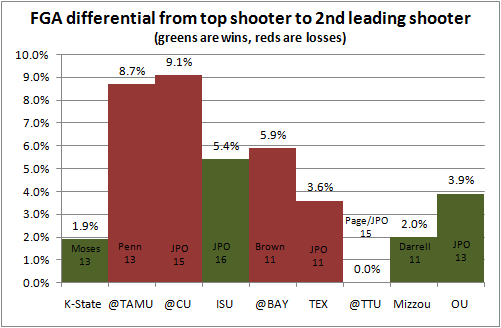 While there are some games that don't agree with the theory in there (Texas and Texas Tech, and the only small exception on the win side is the Iowa State game, but when JPO finishes with 29 points, he can take all the shots he wants.), overall, when the shooting is closer to balanced, this team is playing better basketball. As I have written many times, this isn't a team with a consistent go-to-scorer, so the shots need to be balanced.  To boil this all down, in the Cowboys 5 losses, the average spread of shots taken is 5.5%, in victories it is 3.3% (yes it would have been easier to just say that, but the post is called Graph-town... i have to graph!).