Oklahoma State Basketball: How Do The Cowboys Beat Baylor's 2-3 Zone?

Share All sharing options for: Oklahoma State Basketball: How Do The Cowboys Beat Baylor's 2-3 Zone?

Everyone remembers the odds of making the NCAA tournament post from last week, right? Great, I love it when my work is remembered. Well at that time I put the Cowboys chances of making the NCAA Tournament at 1.02%, but obviously the Tech win and updated Pomeroy chance-of-winning percentages require an update to the Cowboys chances. Working on the same assumption that the Cowboys need to win these last two games, then win two in the Big 12 Tourney, right now the percent chance of winning for each game is 53% (Baylor), 49% (@OU), 60% (1st round, 10th place team), 12% 2nd round (UT or KU). The odds of winning all of these now stands at 1.87%.  So things are looking up!  But, in the interest of including one sports cliche per post, these games have to be taken one game at a time.  So on to the Baylor preview...

We all watched the first matchup between these two teams and witnessed what usually happens to teams that can't consistently hit shots from the outside against a 2-3 zone, yet continue to try... the zone gradually shrinks towards the basket with each missed shot giving the offense more outside looks, which they continue to miss and eventually shoot themselves out of the game.  The Cowboys shot 4-19 from three against the Bears in the first meeting, and I would guess about 30% from 15-21 feet en route to scoring 57 points against a team that gives up 68 a game on average in conference play.  And since the regular previews get old to write (and I'm sure to read), especially when it is about a team we have already played, I figured I would focus on the most important and interesting aspect of this matchup - beating that damn 2-3 zone.

Since I will be discussing and diagramming this a lot in this post, here is what a base 2-3 zone looks like, with the red circles representing a defender, and the blue circle representing the area they could reasonably cover from that spot. 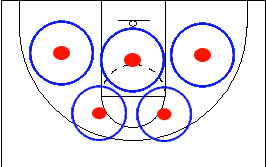 You can see that in it's basic form, there aren't a whole lot of areas to penetrate if an offense were to play to the strengths of the zone. So the key is to get the zone out of balance with ball movement, overloading one side, and any other means you can think of to get some of these defenders out of these spots.  In this form, the main open areas are at the three point line, and as we know, this isn't a strong point of the Pokes offense, so what can they do to open up areas where they can be more productive?

Click the Jump for a few keys to beating this zone.

Get out in transition - This is probably key #1 to beating any zone that has ever been implemented. If you run and push the tempo, especially after a Baylor miss, the defense doesn't have time to get set, and are forced to try to match up which is not something they are as used to doing.  The emergence of Reger Dowell, along with the ability of 4 of the 5 starters to push the ball up the court in transition will help this time around with the zone. 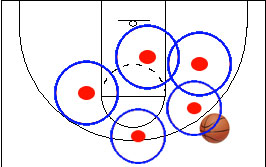 Notice how a pass or dribble to the wing moves the defenders around, and opens up some space around the FT line, and on the weak side. (obviously this is all dependent on where the offensive players are as well, but the easiest way to explain this is in a vacuum so go with it here)

Create a weak point on the baseline, and attack it - As mentioned above, the weak points don't really exist until they are created, so step one is to open up some floor, while step 2 is to attack it. In the case of the 2-3, the easiest way to create weak points it to get the ball right into the middle of the zone, in the hands of your best tall passer. This probably means Matt Pilgrim (yikes), but Reger Dowell should be able to do some of the same things even without the benefit of height.  What happens when the ball gets to the middle, usually around the free throw line, is the baseline trio is forced towards the middle, which opens up the space behind them for a baseline cut. The Pokes will try to get the ball to the free throw line from the wing, which catches an already rotated defense with no way to cover the weakside baseline, and even the strong side baseline naturally opens up a little. 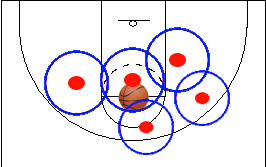 With one of the biggest assets of this Cowboy team being all the naturally gifted cutters (JPO, Brown, Dowell, Pilgrim), this is probably option #1 in the halfcourt set.  Also notice that the corners naturally open up in this scenario, and while Page typically likes to shoot from the top of the key, he could be well served to hang out in the corners and collect wide open looks.  The key here, and with any other play that is run, is that the guy that receives the first pass needs to make a decision quickly.  He needs to catch the defense while they are still shifting their positions in response to the pass to the FT line.  If he gives the defense 2 seconds to mark all their spots, the opportunity is lost.

Hit a few outside shots early - I would love to avoid this topic altogether, but unfortunately whether the opponent is playing a zone or not, there is a need for outside shooting.  The psychological effect on both teams if the Pokes miss their first 5 outside shots is so huge as it not only counts as 5 wasted possessions, but allows the Bears to collapse that zone inside a little more, daring the Cowboys to keep shooting.  Which pride will inevitably convince them to do, and the last thing any offense wants to be doing is what the defense is daring them to do. 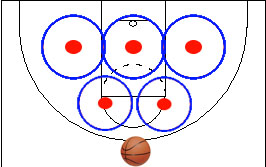 Are you telling me you wouldn't be tempted to keep working on your three-point shooting against this look?

Rebound - Outside of the transition game, this is the most glaring area where a natural mismatch is created in the offenses favor by any zone.  Since the defenders aren't marking a man, when a shot goes up, especially if the shot is put up while the defense is in the middle of a rotation, the defenders either have to just turn around and hope the rebound bounces to them, or look down and seek someone to block out, thus sacrificing eye contact with the rim and ball.  With offensive rebounding already being a strength of this Cowboys team, this should be an area where the Pokes pick up some easy put-backs. Although, in the first meeting the Cowboys only managed 5 offensive rebounds for some reason.

Play inside-out, then outside-in - This has been somewhat covered in some of the other keys, but getting as deep as possible into the zone, without getting trapped, is another huge key to attacking it.  Once a driving guard, or posted up big, can get within 6 feet of the basket, the top and weakside perimeter becomes wide open. 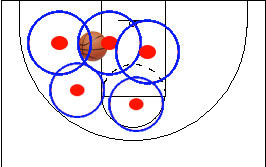 Assuming you execute properly from here, once you get the zone defense in this position, you have beaten it. If the player has an open shot, they take it, but even if they don't, they do have the attention of at least 3 of the defenders leaving 2 to cover the rest of the court. The temptation here is to kick it out for an open look from three.... this would be playing a basic inside-out game.  But with the Cowboy's noted difficulty with the outside shot, they would be well served to take the inside-out game plan, then turn it to outside-in by taking that pass from underneath, and driving or quickly hitting someone else down low instead of just putting up a shot.

There are obviously many other ways to beat a 2-3 zone, and there are entire novels written about it, so I will cut this one short right here (at a novella), as I believe these 6 keys play most to the Cowboys strengths.

PLAY THE MARCH TO THE CHAMPIONSHIP GAME AND YOU COULD WIN A TRIP FOR TWO TO LAS VEGAS! LOOK FOR THE CODE INSIDE SPECIALLY-MARKED PACKAGES 12-PACKS OF BUD LIGHT ENTER CODE AT FACEBOOK.COM/BUDLIGHT

----- No Purchase Necessary. Open to U.S. residents (except CA & TX) 21+. For a chance to win a Grand or First Prize, Game Period 1 begins 3PM CST on 2/14 & ends 3PM CDT on 3/18. For a chance to win a First Prize only, Game Period 2 begins 3:00:01PM CDT on 3/18 & ends 3PM CDT on 4/30. To participate, obtain a Code from inside specially-marked packages of Bud Light beer or to request a Code without purchase, visit budlight.com/freecode during a Game Period. Limit one (1) free Code request/day/person or email address. To play, text HOOPS to BEERS (23377) & follow prompts or visit budlight.com/freecode & follow instructions. See Official Rules inside package or at budlight.com/freecode for complete details. Void in CA, TX & where prohibited. Enjoy Responsibly – ©2011 Anheuser-Busch, Inc., Bud Light® Beer, St. Louis, MO