Share All sharing options for: First Round NIT Preview: Harvard at Oklahoma State

Alright, the NIT wasn't what we wanted at the beginning of the season, and even late we held out hope for making the CBI NCAA tourney, but I feel like as a fanbase we have come to terms with this being a re-grouping season, that Oklahoma State had maybe the 9th most talent of all the Big 12 teams, and that the NIT was where this year's team was destined to be. And we realize that this is OUR team. We love this team.  We respect what this team has done, what they have overcome, and where they are now.  This is the time when we prove that we are fans, that we are still a school that values basketball, where we honor all the previous great seasons, this season, and the future greatness by forking over $10 for a ticket and fill the house for this game.

As for the Crimson and what we can expect tonight... that is where the "preview" part of this lecture comes into play.  First, let's meet the chaps from Harvard.  The Crimson boast a starting five of Chatsworth Billingsly, Thurmond Denslow Wellington III, Edmond Rutherford XII, Kensington Porter, and Othello Lexington Stonegate II, and they find this sort of humor to be rather droll and certainly nothing that should be shared outside of one's country club or haberdashery. 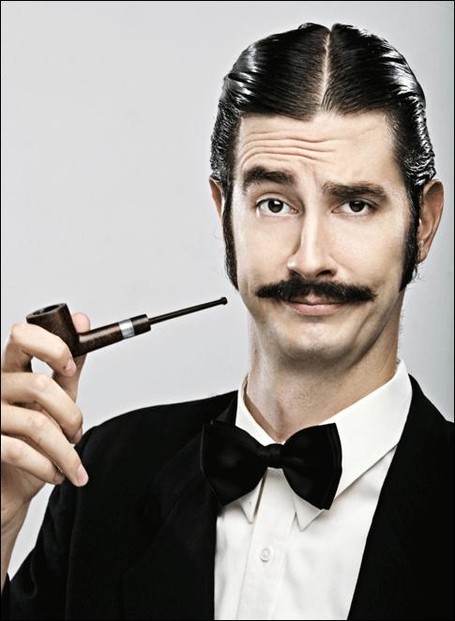 Looking forward to a gentlemanly game of sport, old bean

Well that was fun wasn't it? Should I write the real preview now?  Okay, follow me to the other side of the Jump, and let's really discuss this game.
(And for the record, a couple of my family members are currently attending Harvard, and both have told me it is way more nerdy than it is rich and stuffy... but I like this stereotype better. I also considered questioning if they are all symbology majors that expose Vatican secrets in their downtime.)

Why this is not an easy win
Alright look, Harvard is from the Ivy League, but these guys are solid. They have only lost 6 games this season, 5 of which were to teams that are in the NCAA tournament (George Mason, Michigan, UConn, and Princeton twice).  They also beat Colorado (by 16), Boston College (on the road), and were only left out of the NCAA field because of a miracle shot by Princeton's Douglas Davies... and even with that loss were considered to be a bubble team, even though an Ivy League school has never received an at-large bid.

Former Cornell coach Steve Donahue, who is now at Boston College was quoted as saying, "I think Harvard and Princeton are two of the best teams in the country. They deserve it [an NCAA bid].". This is the same Steve Donahue that coached Cornell to a sweet-16 appearance last season.  In summary, Harvard is really, really good, and was 9-5 on the road this year so the home court advantage is somewhat diminished. This will be a tough game.

Who are the Crimson
They are basically five guys who will each play 32+ minutes, a sixth man who will see about 15 minutes to fill in the gaps, and maybe 2 other guys will see minimal minutes if there are foul issues or to briefly spell someone.

Keith Wright is the leader of the Crimson, was voted Ivy League POY, and at 6'8" 240 is the muscle inside. Wright boasts a nice 59% shooting percentage for the season thanks to most of his shots coming from inside of 5 feet and off of offensive rebounds (a stat he ranked first in the Ivy League at 3.3/game). Wright is also a force on the defensive end where he is used as a lane enforcer and helps on most drives, he averages 1.7 blocks per game.
Comparable Big 12 player for reference: Tristan Thompson.

Kyle Casey (6'7", 215, F, So) was selected to 2nd team All-Ivy even though he missed most of the non-conference season due to injury, and has only been back at full strength since January. While Casey also gets most of his points on the inside, he is a much different player than Wright. Casey is someone who likes to have the ball in his hands, has nice handles, can pass well, prefers to slash and can finish as well as anyone in the NCAA.
Comparable Big 12 player for reference: Quincy Acy.

Brandyn Curry (6'1", 195, PG, So) was also a 2nd team All-Ivy selection and is exactly what Oklahoma State was missing this season, an excellent distributor. Curry averages 5.9 assists per game, good for 1st in the Ivy and 17th in the nation, compared to only 2.5 turnovers per game, he shoots 36% from three and 74% from the FT line. He is very good off the dribble, and excels at driving to the middle of the defense and finding an open cutter, or someone open outside. Curry is also solid on the defensive end, leading the team in steals at 1.3 per game.
Comparable Big 12 player for reference: B.J. Holmes

Summary
As I said above, this is going to be a huge challenge for the Cowboys.  KenPom gives the Pokes a 66% chance of winning this game, and there is no doubt that the home court is a huge factor there.  If this thing was played at a neutral site, I think the line is even.

The Crimson play at an A&M type of pace, only averaging 64 possessions per game which is the slowest in the Ivy league, and is near the slowest of all D1 schools. They play very stingy defense, holding opponents to 64 ppg, and 43% shooting... and as the saying goes, defense travels. On the offensive end they lead the Ivy League in every single shooting percentage stat, so they make those small amount of possessions count and actually lead the Ivy League in points per game as well at 72.

The main areas to exploit for the Cowboys will be the Crimson's lack of depth, and on the glass. They really do only play 5 guys a majority of the time, with a few others just offering brief spells and foul trouble relief and don't have a lot of height or muscle.  As much as I hate to say it, if the Cowboys play physical, turn this one into a foul fest, the Pokes depth should win out in the end.