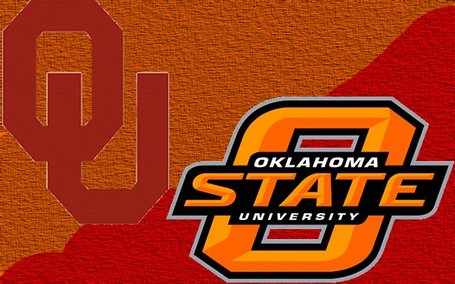 It's that time again folks. its Bedlam, and it's big time. This year's Bedlam series pits #8 Oklahoma against #19 Oklahoma State. Going into the game, the Cowboys are 3rd in the Big 12 with an 8-4 record, and the Sooners are 4th at 6-5. A single win will preserve our lead in the standings, but this series is more important that standings.
Click the jump and lets get into it, shall we?

This series is big for both schools. For the Pokes it's a chance to keep the momentum going, and to do it against a very good opponent. The Cowboys have won 3 straight Big 12 series, including last week's sweep of Missouri. If OSU can win 2 of 3 this weekend that would leave us at 10-5 in the conference, and probably a game out of first. That would also give us a comfortable 3 game lead over 4th going into the back half of the season. And we need all the lead we can get, with series left at Texas A&M and Ohio State, and TCU at home. The Sooners are looking to regain some consistency, having lost a series against Kansas State a week after sweeping Texas Tech. They are hoping to get it rolling again, after taking a 16-0 start and going 8-8 since.

The Friday game in Tulsa will be crucial to the entire weekend for the Cowboys. The Pokes had an 8 game winning streak in Tulsa snapped in 2009, and have lost the last two in T-Town. I think whoever wins today will win the series.

In Fridays game the Cowboys put Mike Strong (3-0) on the mound against the Sooners Michael Rocha (7-1). I really like this matchup, probably more than I should, but Strong has been throwing the ball well, with opponents only batting .231 against him. Rocha has been doing even better, entering tonight's game with a 1.02 ERA and opponents batting .158 against him. I see this being a low scoring game, and that helps the Cowboys the most, because when the OU bats get hot it's hard to beat them. If the score stays low, I think the Cowboys take this one, 2-1.

Saturday's game in Bricktown has OSU's Brad Propst (6-1) facing off against OU's Burch Smith (5-1). If there is a game I am most confident we will win, it's this one. Propst has been killing it lately, entering the game with a 1.25 ERA and opponents batting .213 against him. Smith has the worst ERA of any of the weekend pitchers, giving up a 3.83 ERA with opponents batting .268 against him. I think it will be very hard to the Sooners to get many hit's in this game, and I think we will take this one as well, 4-2.

As confident as I am about Saturday's game, I'm that worried about Sunday's. OU's Dillon Overton (5-3) has been balling out of control the past few weeks, with a 1.45 ERA and opponents batting .230. Now, that's not to say he can't be hit off of, as his Big 12 numbers are not as good, with a 3.27 ERA an opponents batting .282. He has just been on a hot streak the past few weeks, and he killed us in our non-conference meeting last week. If Overton stays hot, it's going to be a long day. OSU skipper Frank Anderson has not announced who the Sunday starter will be, but I'm guessing Randy McCurray. It pains me to say it, but I think OU takes this one, 7-4.

We are going to need our big hitters to keep it up, guys like Dane Phillips, Zach Johnson, and Mark Ginther, who are batting .404, .361, and .313, respectively, Johnson and Ginther lead the team with 5 home runs a piece, and Phillips .404 average leads the conference. As a team, the Pokes are second in the conference in batting average, with .304. I think the fact to OU has won the series two years in a row is probably a positive going into this series. Our boy's should be ready to end that, and we have the talent to do it.