Share All sharing options for: Cowboy Golf Walks Away With BIG12 Golf Tournament Trophy That Was Never in Doubt

Course architect Perry Maxwell's Prairie Dunes was the site of a Big12 massacree these last three days.  The -10 under par Cowboys fired through Maxwell's beautiful layout on Tuesday broke a single round record, while the likes of Texas A&M, Texas, Texas Tech, and OU were playing through wet sand 12-25 shots back, and the rest of the conference was looking for their balls in tall prairie grass completely out of the running.  It is alleged that Iowa State and Kansas State started drinking heavily around the back nine the first day, but this can not be proven despite the fact that both teams officially blacked out at around +70ish by round three.  Kansas State would(again, allegedly)eventually out 'drunkgolf' Iowa State by ritualistically team-chugging warm, bitter 40oz 'Old Englishes' on hole 18 to finish +Ninety Three for the tournament, passing out in last place.

On a cloudy and cold Kansas Wednesday, Oklahoma State continued their Golf highstep into the clubhouse. They shot 1139 total shots as a team for the tournament. The Cowboys took it easy the last round dropping 14 shots for their worst day as a team, but still beat second place Texas A&M by 13 shots.  The battle between the other teams for second place proved mildly entertaining, but then again not really.  The tournament was just more OSU Golf conference dominance, the way it's been since your pappy was born.

OSU cowboy Morgan Hoffman continued his uncontested lead with OSU's Kevin Tway right behind as runner-up.  Tway had battled with OU's Ryan Sirman throughout the tournament, but Sirman fell apart bogeying up a storm in the last round.  Hoffman finished managed the only par score to take individual honors, while Tway finished +5 for second.

Congrats Cowboy Golfers!  Five Big12 conference tournaments in a row, and number one program in the land going into the 2011 NCAA tournament on OSU's home court of Karsten Creek in June.

After the jump is the Oklahoma State Cowboy Golf trophy room... 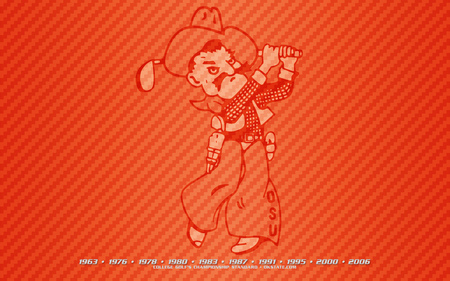 Eight Individual NCAA Champions, 120 All-Americans (most of any school by fifty)