Garth Brooks Gets Master's Degree From OSU, Now Smarter Than Your Dad

Share All sharing options for: Garth Brooks Gets Master's Degree From OSU, Now Smarter Than Your Dad 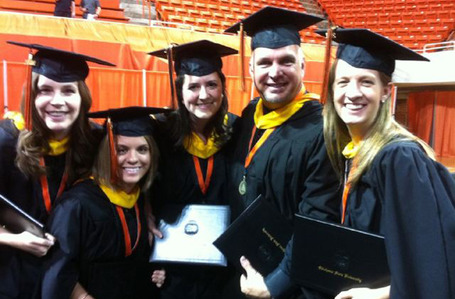 OSU has many accomplished alumni.  In the world of hostile takeovers of Fortune 500 companies, there is no more infamous name than T. Boone Pickens.  Dr. H. Edward Roberts is credited with inventing the personal computer, at least it's the one the Microsoft guys used to tinker with back in the day.  J. Tinsley Oden is one of the most highly sought after computational engineers in the world.  And these are just the OSU grads that use initials as part of their given name.

But perhaps the most famous OSU alumnus of them all is good ole' Garth Brooks.  Garth is so endearing to OSU folks because he earned his multi-platinum name in the heart of OSU playing Willie's Saloon on "The Strip" and working as a bouncer.  Despite differences in musical tastes, any Oklahoma State student becomes a Garth fan by default.  Garth is such a legend in Stillwater that there is a house on Duck St. that proudly advertises: "Garth and Sandy Lived Here 1986-1987" over its front porch.  "Friends in Low Places" will at some point be blared over loudspeakers at any OSU sporting event you go to, and everybody in attendance will invariably sing along.  During OSU freshman orientation, recent high school graduates are issued a copy of "No Fences" and are asked to commit the opening stanza of "The Dance" to memory alongside the Alma Matter.  Freshmen are further asked to disavow any knowledge of Chris Gaines.

So, in the continuing legend of "The Garth", we now find ourselves coming out of the "Reclusive Save a Few Dr. Pepper Commercials Era" going into the "Master Businessman Era".  Graduation ceremonies on May 6th were overshadowed by the presence of Garth sitting in with the other soon to be matriculating students.  Garth had graduated in 1985 with a Bachelor's degree in advertising, and graduated with a MBA on Friday.  Good luck finding work in this economy, Garth.  You're gonna need it.