Yachoff Does Something Nice For Boone Pickens

Share All sharing options for: Yachoff Does Something Nice For Boone Pickens

As fully committing to the Oklahoma State Belligerence of Pride Week program has proven difficult for some, it is important for Yachoff to show how easy it can be to make a difference for one very special person.  Boone Pickens has made donation after donation to his and our beloved Ok State, and now is the time for all Cowboy fans to return the favor.  As we have all no doubt heard, the residents of Joplin, Missouri were devastated by a deadly tornado Sunday evening.  A third of the town is gone, dozens were killed.  So, Yachoff marched into his local Red Cross Office and plunked down $10.65 for disaster relief efforts in Joplin in the name of one Thomas Boone Pickens.  The Red Cross office gave me a nice receipt that Yachoff will mail to Mr. Pickens so that he can deduct the donation from next year's taxes.   Now, imagine if every fan of CRFF mailed Mr. Pickens a receipt of a tax deductible donation to the Joplin relief effort? He'd have, like, 100 Red Cross receipts in his mailbox!  T. Boone literally wouldn't know what to do.

Please consider making a donation for the people of Joplin in the name of T. Boone.  Or do it in your own name, or in the name of someone less ironic.  Or contact the Red Cross for information on how you can help in other ways. Tornadoes scare the beejesus from Yachoff, as in Soviet Russia tornadoes...are pretty much the same as they are in America, awful all the way through.  Please help.  Do it for the Boonster. To donate go to: http://www.redcross-ozarks.org/joplin/

After the jump is a pic of the receipt. 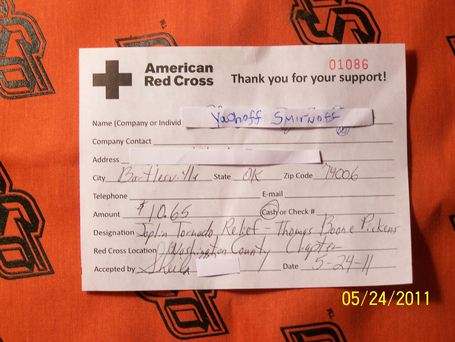 Yachoff had to put his real name on the top, and the lady who took the money and didn't seem to know who TBP was, was a good sport, so her name is redacted in thanks.