The Golden Age of Cowboy Football

Share All sharing options for: The Golden Age of Cowboy Football 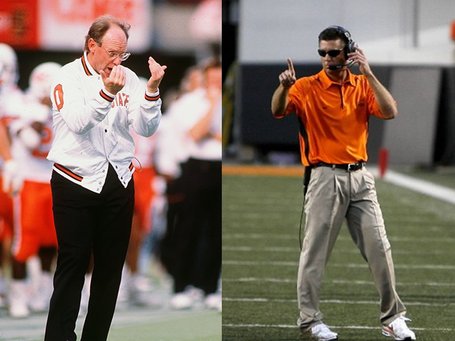 A few weeks ago I was sitting around before class talking about the things college students talk about, most of which can't be repeated here, but the subject of the greatest era in Cowboy football came up. The two sides that formed were those who believe we are witnessing the greatest era, and those who think the 1980's were better. So which is it? Are we witnessing the high side of Cowboy football, or just a good run? When one takes a look at the win's and loses by decade of Oklahoma State football, two conclusions are reached. First, anyone who bitches and moans about 9 win seasons is, indeed, smoking crack. Second, though there were some other good decades, the 1980's and the 2000's (did anybody ever come up a good nickname for that bastard?) are really the only two that have a legitimate claim. Lets look at both decades, starting with the 80's, after the jizump.

I went back to 1900 to look at our win's and loses per decade, and mostly it's not pretty, but here it goes.

To put it bluntly, there have not been a lot of great decades for Cowboy football. Besides the 80's and the 2000's, there are only one or maybe two other decades that can even be in consideration, but I think everyone agrees it's either the 80's or now. The 1940's were pretty good, so were the 1910's, but really, that was so long ago that probably nobody around today remembers them. In the 10's we won 54% of our games. In the 40's we won 55%. So both of those were great times for Cowboy football, with some great individual seasons, including our only undefeated season in school history in 1945, on the heels of a 8-1 season in 1944. We have the Blonde Bomber Bob Fenimore to thank for both of those seasons (and everyone should take the time to remember Bob, as he passed on last July). I think both the 10's and the 40's deserve honorable mention, but now let's get into the heart of the discussion. Is it the 80's with Thurman, Sanders, Gundy and Dykes, or the 2000's with Z-Rob, Fields, Woods (all 3) Dez, and everybody else who we all know and love.

I sent out an email to all the CRFF staffers asking which decade they considered the best, and the general consensus what that the 80's still win, unless we win 10+ games this season. So let's take a closer look at the 80's. During that decade we had two coaches, Jimmy Johnson (who actively tries to forget we gave him his head coaching start) and Pat Jones (who until about 5 minutes ago spent most of his time talking shit about OSU). Johnson took what had become a very inconsistent program and started the rebuilding process, culminating with the 8-4 record and Bluebonnet Bowl win against Baylor in 1983. The following year Pat Jones took over, and remained at the helm for the next decade. Before I continue, in the interest of full disclosure, I don't care much for Pat Jones, In his first 5 years Jones managed 3 ten win seasons, oversaw our only Heisman winner (and greatest running back in football history, suck on it Emmit Smith) in Barry Sanders, and led us to 4 bowls (with 3 wins). We won 32% more games than the next best decade (except the 2000's). I think everyone knows what happened after Sanders left, but that happened in the 90's. Overall, a great decade for us.

The 2000's saw three coaches lead the Cowboys, Bob Simmons, Les Miles, and Mike Gundy. Simmons only year was the 2000 season, and he only managed a 3-8 record. In 2001 Miles took over, and revitalized a lethargic fan base. Sure, we showed up to the games, but for the most part didn't give a shit, and used the games as a reason to drink (and drink we did, reaching the top 15 in alcohol consumption in 2002). Miles managed to get people to pay attention, and for the first time since the 80's get as excited about football as they were about basketball. Unfortunately, Miles was using OSU as a springboard to a a better job (LSU, those filthy, stinking, corndog smelling like cajuns). After Miles left, his offensive coordinator, Mike Gundy, was promoted to head coach. Gundy, the former Cowboy starting quarterback from 86 to 89, guided OSU to 2 of the 3 10 win season's during that time, along with Sanders and Thurman Thomas. Having returned to his alma mater as an offensive coordinator in 2001, Gundy has now played a part in both of the greatest era's in Cowboy football. His first season was an adjustment, in both personnel and expectations, having removed 11 players before the start of the season and winning just 4 games. Since then, though, Gundy has taken to program to new heights, including 3 straight 9+ win season, and our only 11 win season in school history. Another great decade.

When trying to evaluate which decade, or era, was the best in the history of the program, you run into several questions that are difficult to answer. Questions like, "Sure, Barry Sanders is better than any running back since, but was any receiver in the 80's better than Rashaun Woods?". Or "Even though he has more yards over a career, is Zac Robinson actually better than Josh Fields?". The answers, if you're still wondering, are no, and no. But for me, it was not a matter of which had the best players, or which won the most games (which would be the 2000's, by 5 games). For me it was a matter of which improved the program the most, and the answer is clearly the 2000's. Currently we are building a program that will be able to consistently compete. The greatness of the 80's and Pat Jones disappeared in the 90's, and left us with no momentum. Exiting the first decade of the new millennium the Cowboy football team is the deepest and most talented overall, that it has ever been. We have a coach who is not looking to leave, and we have an administration that supports our athletics (maybe too much, but that's another discussion for another day). There is no reason to expect anything but improvement, and most (even reasonable) OSU fans think anything less than 10 wins will be an utter disappointment this year.

This is a discussion that will only be ended when Mike Gundy is no longer a coach. If Gundy only coached for one more year, but won the conference, he would be the greatest coach in Cowboy history, and that would settle the argument. Currently Gundy is 15 wins behind Pat Jones for the most wins as a coach, and has coached for 4 less years. Either way, this season should be very exciting. Go Pokes.