The Curse of the Black Uni's; or The "Poke-Almost-Choke"

Share All sharing options for: The Curse of the Black Uni's; or The "Poke-Almost-Choke"

Everybody has superstition in their lives. Whether you are constantly throwing salt over your left shoulder, avoiding black cats, or turning the television off when you vacuum, everybody has these little beliefs that they intrinsically know are based on falsehood, but follow anyway out of a fear of "something bad happening". The arena of sports is filled with these sorts of fallacious (not dirty) logic. And there is no sports fanbase more deluged with diluted fallacy than the fanbase of college football.

The black uniforms that Oklahoma State unveiled on Thursday, November 17th, 2009, then again on Thursday, September 30th, 2010, have created a big talking point in Stillwater, and by extension, a conspiracy theory. Both games had poor first half Cowboy performances that gave way to two of the most desperate, down to the wire second half wins in school history. The more OSU fans thought about it, the more they smelled a big black rat.

As we approach the dawn of a Cowboy football season that is speculated to have more costume changes than a Lady Gaga concert(that's the shit people listen to nowadays, amirite?), including, like, three different shades of black, we need to sort this black uniform curse thing out post haste. Could these new black uni's that look so fucking cool really be hexed? By definition, can a jersey that produces TWO WINS be hexed anyway? Is this just the same old ESPN ploy for ratings? What was in the envelope Mike Holder handed to those impeccably groomed hobos seen leaving Eskimo Joe's hours before last year's A&M game? Could this all be explained by logical thinking and critical analysis?

Why this game was Cursed: Oklahoma State, ranked 12th in the country at the time, was expected to hand the Buffaloes their butts even without QB Zac Robinson. The normally high octane Cowboys only scored one TD in the whole first half despite wearing the dazzling black jerseys with orange and white accents. Parish Cox and his punt return skills had that lone honor, as two different Colorado QB's scored on us to take a 14-10 halftime lead. This game was cursed because we couldn't get a big lead early on a team we should have easily whipped, and only won later by the skin of our teeth. Turnovers clouded a less than mediocre first half, the running game coughed up the ball and couldn't get first downs. Second-string QB Alex Cate's passing game was non-existent. A field goal was blocked. What could go wrong did go wrong.

Why this game isn't Cursed: QB Alex Cate was fine playing mop-up against Troy in 2008, but was ineffective on this evening of Big 12 play. Cate's 0 for 9 with one pick in the first half looked like a death sentence to Cowboy fans who know Gundy's penchant for sticking to his guns. However, a halftime decision to bring a 26 year old third-stringer the Cowboy coaching staff found in the equipment shed in a Barcalounger eating ancient hard candy and watching "Matlock" proved the difference. QB Brandon Weeden had shown his cannon arm early in 2009 vs. Grambling State, but hadn't had any meaningful minutes until this game. Weeden loosened things up with a 47-yard TD to RB Keith Toston, then with 8:11 to go in the final quarter, Weeden2Blackmon was born with a 28-yard TD grab in the endzone to WR Justin Blackmon. This game wasn't cursed; it was a blessed event. The early deficit was simply a case of an ineffective first half QB, nervy national Thursday night TV-coverage, and too many turnovers. Anyway, Cowboys win 31-28. 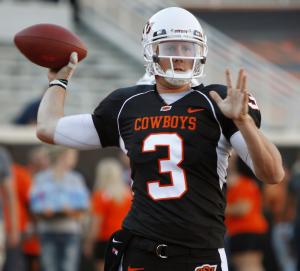 Why this game was Cursed: The first Big 12 matchup of State's season was the occasion to wear black last year and things got out to a similarly bad start. Again, OSU could only score one TD in the first half, and Weeden threw two picks and fumbled as we went into the locker room down by 14.

Why this game wasn't Cursed: The third quarter and first Aggie possession of the fourth quarter was just a down and greasy Okie State comeback victory with a Blackmon reception, two Kendall Hunter run-ins, and an awesome fumble recovery off of J. Johnson. A walk-off field goal that was straight down the middle by Kicker Dan Bailey sealed the deal and the Cowboys went away victorious. The only thing to come out of this game cursed was Texas A&M QB Jerrod Johnson who lost his QB position later on the strength of his turnover-laden second half. Cowboys win 38-35.

There exists an expression in Cowboyland that is attributed to those times where our beloved Cowboy football team would seemingly snatch defeat from the jaws of victory. We all know the phrase in question as: "The Poke Choke". The phrase comes up anytime OSU leads by two or more possessions going into the late quarters, and then just folds like bad lawnchairs. The 2007 Texas game is a real good example of "The Poke Choke". But as OSU football has continued to get better these last two seasons, there exists a new breed of OSU on-field performance where we suck decisively for the first two quarters or so, then turn on the afterburners and scrap out a win. Yachoff calls it: The Poke-Almost-Choke.

The aforementioned games are good examples of this phenomena. Luck is what you make of it, and the Cowboys showed that they had it in them to win through adversity in both "blackout" games. Curses, hexes, jinxes are all made up fantasy that have no real bearing on any field of play, just as uniform color has no real effect on the outcome of the game. As fans we may want to attribute the poor performance of a player or team on the color of the clothing they were wearing that day, but unfortunately our logical minds know it to be false. That player or team just stunk that day. Superstitions have no basis in reality. The Pokes wearing black will happen more often next season, so be ready for more heart attack inducing football coming your way. Cross your fingers.