The most commonly discussed hypotheticals for sports fans will typically consist of "what if we got player X", "what if player X was a little taller/faster/more confident", and "what if player X had played with player Y".  The last one is what we are tackling here as we dive into what it would be like if Big Game James and Tony Allen could have played together in their collegiate primes (answer: grit and grind and awesomeness), or what would happen if you built the most powerful, highest body fat percentage, and least athletic twin towers lineup around Jason Keep and Jack Marlow (answer: fouls and BO and unattractiveness).

I got the inspiration to do this from the KU sports official site which did some all-decade basketball team bracket and came up with KU's best starting 5 from the last decade.  Sure it is full of the usual hate-able Jayhawks (do KU fans support Gooden?), but I did like the idea, and decided that Oklahoma State needed to field its best of the 00's team.

We are going a little deeper here at CRFF though, and looking for our best 12 man rotation from the past decade.  The only fair way we could come up with to do this was for each of the 5 of us to create a team of the best starting 5 and 7 reserves, and have them meet head-to-head in a simulated environment to determine which is the ultimate Oklahoma State All 2000's team.

After the Jump are the rosters each of the CRFF staff came up with: (to be eligible, a player needed to have stepped onto the white maple anytime from the 2000-01 season on)

The order of each position dictates the playing time.  So the first SG listed is the starter, the second one gets the next most minutes, etc.

The Breakdown
Obviously not all these players fit perfectly into a position, but we allowed for some flexibility there and let each person put each player in the place they thought worked best for their lineup. Also, obviously the lineups could be more fluid as many of these guys could move around to different positions as different lineups are on the court, but to keep this simple we locked each player into the position they are assigned.

Point Guard
All five of us had the same 2 PG's (Eaton, and Lucas), the only variable was which one got the start.  For me, the choice between Eaton and Lucas more came down to fond memories of watching Eaton develop over 4 years as opposed to the quick hit career Lucas had at Oklahoma State. Other comments were that "Eaton was more of a leader" (Yachoff),  "I want the better shooter in JLIII" (King), and this excellent over-the-top comment "To this day, I honestly believe Eaton had the potential to be one of the best point guards in the history of college basketball. Unfortunately, he played during a very rocky time for the program and never really saw his full potential until his senior season under Coach Ford." (Cincy).

Shooting Guard
SG was a little more erratic. All but one of us had James as the starter (King went with Bobik), but after that it got a little shaky.  4 of us had Curry in there, 3 had Mo Baker, Bobik made it onto 2 rosters, and Page made an appearance because: "Keiton is and looks like a magic leprechaun that scores three-pointers." (Yachoff).

Small Forward
Tony Allen was the starter across the board here.  As for the reserves, Obi makes an appearance on 3 teams, Dove and Stevie Graham show up on one roster a piece, and one roster featured no one backing up Tony. Cincy does not believe in fatigue when it comes to Mr Allen.

Power Forward
You got Joey starting for 3 teams, Boggan for one, and Marshall playing the 4 to start for King's team. King's explanation for this move was "just because...". I think the three that went with Joey obviously made the right move and I regretted my Boggan decision very quickly. The only team that didn't go with Joey and Boggan was Yachoff who left Boggan out and put Andre Williams in there for his shotblocking, toughness, and non-bitchiness.

Center
I-Mac gets the start for 4 of the teams with Yachoff being the lone Marshall starter at the 5 because "he has tremendous heart" (Everyone). We all have Marshall and I-mac on ours squads, 3 chose to add the mad Swede, Fred Jonzen, for some "soft" depth, and King put Dre-day in there to back up I-Mac since he had Moses at the 4.

The Simulation
Now we just need to simulate these games and we can determine which of these is the best lineup, and the way we chose to go about this was to utilize whatifsports.com. If you are not familiar with the site, you can create "dream teams" of players from any school, era, position, or any other variables and place them on the same team, then take on other dream teams with a ton of factors all simulated. I plugged all our "best of" teams into the site and let it run. Since it does simulate variables from game to game (like if someone shoots 50% for their career, the simulator doesn't have them shoot 50% every night, they may shoot 30% one night, then 58% the next and so on.), you won't get the same results every time you match up 2 teams. For this reason, I had each of our "best of the 00's" face each other 7 times so we could get the most clear picture of who the better team is.

The Results
And here are the results: (for posterity, here is a spreadsheet of the stats for every game (possibly the most loserish link ever posted at CRFF))

A lot of 4-3 series in there, with the exception of King's team just brutalizing Yachoff, and Royal scoring a 5-2 win over Yachoff as well, so for the most part the 5 teams were created fairly equal.

Now, whoever has the best overall record will be deemed the winner of this thing, and their team will be awarded as the "Official CRFF Oklahoma State All-2000's Basketball Team" (or perhaps a longer title if we can come up with one.

Royal John's team is the winner, and from now on, his roster is the Official CRFF All- (the rest of the title). 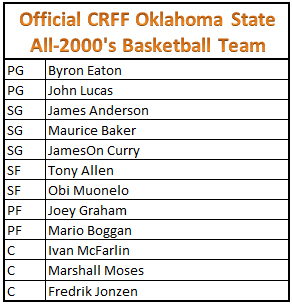 At least this is the official CRFF team for now.  Feel free to submit your best 12 team rosters for the Oklahoma State All-2000's team and I will run them through the simulator versus this team. If you can beat it in a best of 7, then your team becomes the Official CRFF (etc. etc.).