A Recap of the First Eddie Sutton Show, With Boxes

Share All sharing options for: A Recap of the First Eddie Sutton Show, With Boxes 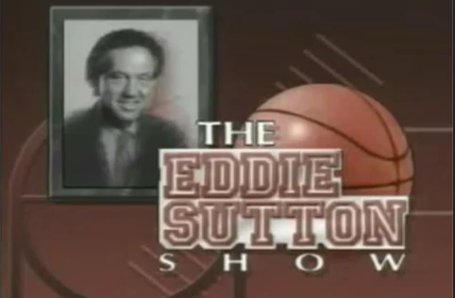 As anyone who follows @OSUAthletics on twitter or YouTube is aware, they have recently put up the entire first season (1990-1991) of The Eddie Sutton Show on YouTube. I spent part of my weekend watching most of these, and they are absolutely addictive.  There is something magical about being taken through something that happened at a time you were far too young to know exactly what was happening.  It is as informative as a documentary, but more like you actually went back in time to experience the events as they are happening.  It would be the equivalent of wanting to know what TV entertainment was like in the early 90's, and while you could read some articles detailing what other people thought about early 90's TV and looking at things through their lens, you could instead sit down and watch seasons of Melrose Place, Bevis and Butthead, and Full House, thus experiencing what people 20 years ago did, in the exact same context, but with your adjusted 2011 frame of reference.  It is an amazing way to experience history, and I am already jealous of the people of 2100 who will be able to watch our shows from today in order to glean what today's entertainment was like. (hint: we loved porn)

So on to Episode One of the Eddie Sutton Show.  I will meet you after the jump in 21 glorious minutes and 13 wonderful seconds.

Wasn't that riveting?  I swear I am not being hipster, nostalgic-ironic about this like some d-bag talking about an old A-Team shirt or something.  That was seriously the most riveting OSU related video I have watched in a long time. So let's take a walk through it, shall we?

0:01 - Right from the start you know we are in the early 90's. That synth beat hits hard and could not have more embodied everything about the early 90's without involving at least two Ninja Turtles, Garth Brooks, and someone driving a Saturn.

0:11 - As a part of the intro highlights, there is a really sick dunk with some flair by #32, who we find out later in the video is John Potter, and that he needs to improve defensively.

Side question, why are all the individual crowd reactions from this time period so uncoordinated looking? In every 80's and early 90's bball highlight videos there are just an insane amount of fans performing awkward half-jumps with 3/4 raised arms, poorly timed high fives, and overbite dancing. Did the clothing just make everyone look uncoordinated, or was there a huge boon in fan athleticism in the late 90's?

0:46 - Robbie Robertson's hair makes me incredibly nostalgic. I am about 90% sure my dad had this exact hairstyle at this time. Thick wavy hair being forced into a part even though it naturally wanted to go back or forward, but the early 90's would have none of this and demanded it be parted.

1:13 - Seeing a young, jubilant Eddie bouncing around in his chair and obviously very excited about his first season back at his alma mater brought a very genuine smile to my face. It feels like drinking a 34 degree beer on a 105 degree day.... super refreshing, and leaves you a little lightheaded. It's not like things ended horribly for Eddie here, I mean he is still at most of the games, people chant his name, he gives speeches, but there is a bit of a tarnish to his legacy given the stress at the end of his tenure. Not a huge tarnish mind you, but I'm sure we all now think of him slightly differently than we did in 2004.  The Eddie in this video is the Eddie I prefer to remember. Full of dark-ish, full-ish hair, pre-jowls, carrying himself in a sorta carefree but powerful way, engaging, happy, just an all-around likeable guy.  Although, I must admit that I do have a soft spot for the post 1996 or so scowling Eddie too.  Anyway, this is the first Eddie in this video, and it is invigorating to see.

1:50 - Great motivational speech about bringing the program back, references Henry Iba, the hair on my arm stood up.

3:40 - Sean Sutton intro.  Eddie calls him "Son #2", then says one of his other sons is in Transylvania in Kentucky. Classic.

4:02 - Darwyn Alexander intro.  I give his box a 4 out of 10.  It is definitely nice and tight on the sides, but it is really lacking in height.

4:24 - The aforementioned John Potter. It usually isn't a good sign when Eddie says "good scoring, but needs to play tougher defense and rebound better".  That is Eddie code for "he is on a very short leash, and will get pulled out of games a lot for doing something stupid".

A side note - The white uniforms in this era are outstanding.  Especially the shorts. The orange trapezoid down the sides, the excessive stripes around it, old OSU logo, I love them.  I think these would get my nod as the unis to go with if we ever sport some throwbacks.

7:02 - I have never noticed this before, but a young Eddie's facial expressions, mannerisms, and even his looks a little bit, are very reminiscent of Bill Clinton. That leaning back posture, arm and hand gesticulation, voice tone, air of confidence, there are a lot of similarities there.  They even both came into office/jobs around the same time, and we watched both age at the same accelerated rate.

10:45 - Great play with Corey Williams driving and dropping it for Houston. Dowell/Brown and Nash need to be running this exact thing 500 times this season.

12:25 - Was it illegal in the 80's for women to have hair that reached their shoulders?

14:15 - Plenty of mentions of Mr. Iba.  This is why it was so hard to lose the Suttons and replace them with an outsider. It isn't Coach Ford's fault he didn't play for Mr Iba, but he just can't compete with statements like this,
"These things were taught to me by Mr Iba," and "another reason I'm so happy to be home, Mr Iba comes over to practice every day".

Compare that to Coach Ford's statement upon accepting the job at OSU,
"I'm a big believer in tradition and I've studied the game tremendously. Obviously, it's special for me to be part of a program that coach (Henry) Iba started," Ford said. "The foundation that the Sutton family has put on this program, I want to build on that."

Again, not Coach Ford's fault, but when Eddie is talking about values being instilled in him by such a legend, and all you have is that you have studied some history and hope to build on the foundation that is here just starts you off with a fan support deficit.

15:40 - Mizzou highlights start. Either congrats to OSU Athletics, or to the original broadcast, or whoever is responsible for the surprisingly clear picture for these highlights.

15:55 - Byron Houston highlight, and a quick mention that he was 9 of 10 shooting in this game. After this last season's shooting performances I can't even imagine having someone that consistent around (it would be like expecting Moses 12-12 performance against Tulsa every night). Also, since the intro highlight package, Houston's box has grown an inch, but it has lost some tightness.  It is more of a puff than a nice, high, and tight box at this point.  Still a 4 out of 10, but only based on height as its form is suffering.

16:39 - More quickness on display. As a miss/block turns into a half-breakaway with a drive and kick for an open three.  Eddie called it "good smartness".

17:14 - I can hear contempt for John Potter in Eddie's voice every time he mentions him. I don't know anything about Potter, but I smell an undisciplined shooter, and it seems to get under Eddie's skin a little.

18:20 - Eddie indirectly calls out Leonard Hamilton by saying that Dirato told Eddie there was no way that this Cowboy team could have been in this game a year ago.  Love it... especially because I am sure it is a correct statement.

18:55 - Apparently in 1990, if you wanted to ask the coach a question, you had to send a postcard to a physical address. Then, days later, an assistant would sort through all the questions and choose the one that could be answered on air, a week from now.  Has 1990 ever heard of twitter?

20:45 - Eddie giving a pep talk to the fans that they need to be loud and involved in the game. This really brings the Coach Ford thing full circle as it is basically the same thing that Ford has been telling OSU fans the past 2 seasons. It is so difficult for me to picture Eddie as new to Stillwater (as a coach), trying to prove himself, trying to win over the fans while still asking for their help, and putting on a good show every time he is on camera.  I have really only known Eddie as the OSU fixture.  The man that could say or do whatever he wanted because he was so beloved, the man whose devotion and status at Oklahoma State was not only never in question, it was never even considered because Eddie is Oklahoma State.
It is really interesting to see this humbled version of Eddie... it helps me remember that he was once just a man, trying to build a career and a legacy, and put down some personal and professional roots.  Oddly enough, this video has left me wanting to cut Coach Ford a lot more slack as this serves as such a reminder that it takes time for a coach and a fanbase to endear themselves to each other.  Learn from history kiddos.

That is it for episode 1 of the Eddie Sutton Show.

Spoiler alert: In Episode 2 Robbie Robertson wears a red blazer that I am 80% sure has shoulder pads in it.